Live Free or Die Fest I

J is lucky enough to keep in touch with most of his high school buds from the Prep. Many of them still live in Jersey, but a few have strayed to other states. Despite geographical challenges and regular commitments, they find ways to get everyone together as often as possible. In fact, Crabfest, which takes place in August on the Chesapeake Bay in Maryland, is going on its fifth year.

Well, because we all can’t get enough of each other, we decided to try to start another annual tradition: the Live Free or Die Fest. 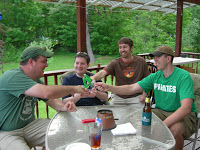 The boys enjoy a jello shot toast (yes, those are syringes)

So this weekend, our house was inundated with 5 visitors: DrPilot, theDancer (his wife), PanicMan, theMakeupArtist (his wife and babe in belly) and Beef. 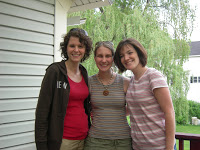 Friday, we explored Concord a bit and just hung out at the house playing “bags,” better known as Cornhole. That night, we did a huge cookout with our landlords and some of their friends. Cooked up a little bit of everything and ShortShorts did a fireworks show in the backyard (they are legal here). 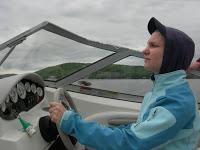 Saturday, J & I got to debut as boat captains. Unfortunately, the weather DID NOT cooperate. It was pretty much FUHreezing, but it could have been worse. We still stayed out on the lake for 4 hours or so.

As for our boating skills, let’s just say we improved as the day went along. Luckily, DrPilot has boated for years and is more familiar with driving and reacting to other boats and buoys. It’s a lot different when you’re actually on the water, as opposed to reading the rules on paper.

For example, we borrowed a lake map from some friends and they told us all the highlights. They also told us the spots to avoid. Early in the trip, I was “driving” and we saw the “exclusion” buoys around us, then DrPilot realized they were in a triangle. We were directly in The Witches, an area we shouldn’t be. Then J noticed how shallow the water was. Let’s just say there was a lot of yelling and panic … “Pull the prop!!!” I abandoned the wheel and we came away unscathed. That could have ended VERY badly. We learned our lesson and followed the map a little closer after that. 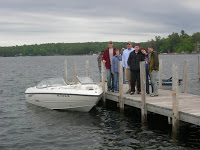 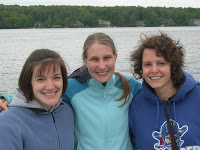 We ended the night with a fun game of Balderdash. We discovered a new word for buttocks and that was extremely exciting.

Sunday, we went to Portsmouth for the day (minus Beef who visited with his brother and family). We dined on seafood for lunch, then the boys and girls split. The girls went shopping to the outlets in Maine, right over the border. The boys made their rounds to the local breweries. We eventually went to what our friends called a crunchy hippy pizza place. Indeed it is, with all-natural ingredients, but we love it. 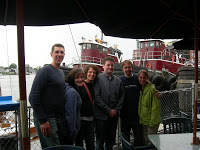 The group in Portsmouth
It was really an awesome weekend and we hope we can make this some sort of annual tradition. Until Crabfest Prepsters!!

This was the aftermath.

2 responses to “Live Free or Die Fest I”