Meet me on Bog Road

When J and I bought our bikes at the REI Garage Sale in August, I have to admit, I really thought they’d just collect pollen. J intended to commute to work, but since he loathes mornings, I couldn’t picture him getting up and jumping on his bike to ride. Luckily, I was wrong!

Instead, he’s been amazing me with his commitment to biking! He rides to/from work sometimes 3 times/week. It’s 12 miles one way, so that’s pretty darn good. Since my commute is about 300 feet from my bedroom to my office, I had to get creative. So when J rides home, I hop on my bike and meet him for some of the ride. I usually make it 4-5 miles, then ride the way back home with him. Sadly, with the days getting shorter and the temps dropping, our season of biking is probably ending soon.

I brought my camera with me last week, so I present to you our bike route. The colors of the leaves had really just started to pop. Even yesterday on our ride, they were so much brighter than they were in these pictures. 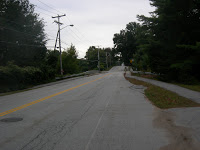 The first mile is Washington Street, which is nice and wide and really quiet (in terms of cars). 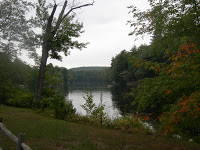 The second 2+ miles is on River Road, which J affectionately calls Death Trap. It is gorgeous because it rides along the Contoocook River, but it’s very narrow and winds back and forth. In fact, he was NOT happy to hear that I stopped to take some pictures. 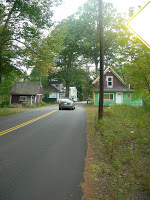 You can kind of see that there isn’t much room for cyclists. But this section is actually okay because most of the other sections have guardrails, leaving even less room. 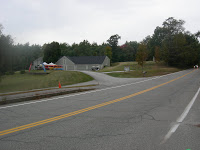 And here is the beginning of Bog Road (and its hills). This is Contoocook River Canoe Company, where we bought our kayaks in 2007. 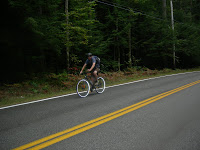 I make it about 1-2 miles on this road before meeting up with J and turning back around.

I read that there was going to be a pumpkin shortage this year in New England because of all the rain we had early in the summer. These pumpkins don’t look too shabby though! Maybe they were on steroids. 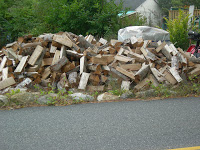 You can see people are really getting ready for the winter! 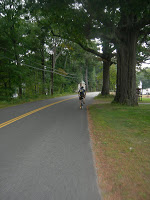 Back on River Road for the ride home.
Overall, I still have quite a bit to learn about my bike and road biking, but I’ve enjoyed it thus far. Rule #1 I learned this year, keep mouth closed. I think I’ve only swallowed 3 bugs, but it is not pleasant. Anyways, I can’t even believe I bike commuted to work when I lived in Phoenix. I broke all the rules (never used hand signals, rode with my earphones on). Which could be why I ended up with a few broken ribs from hitting a car … Let’s hope our biking days in New Hampshire do not result in any more.

2 responses to “Meet me on Bog Road”