This is our soccer record for the first winter session, which ended last night. I couldn’t be prouder! We’ve been playing with the same team for over a year now and we’ve really gotten our sh%& together. We still have a lot of players come and go each session, but there’s about 6 of us that have been together from the start. And now, our players are a little more evenly matched, with a few handicapped players (Hi! That’s me!). So out of the 25 teams in this first session, we placed as the 3rd best team! We used to be in the bottom 5 when we first started! Next session should be really interesting because there are 50 teams, so they split us into upper and lower levels. Based on our record, we ended up in the upper level. Gulp.

Last night’s game was particularly awesome. We played the best team in the league and they had an 11-0 record going into it. We were shorter than usual on subs. J had to come out of retirement (he’s been nursing a bad knee and just coaching us for a few weeks. Yes, amputation is imminent). The refs made some really bad calls on us (even the other team thought so). So we just figured we’d lose the game. But we didn’t! We tied! We actually almost beat them, as we were up by 1 with 4 minutes to go. But they scored. J put in all our best players (Hi! I’ll just cheer from the bench!) to try to maintain and it worked. We’ll take the tie though. And the fact that we were the only “blip” in the other team’s record.

Tomorrow, we are going from this: 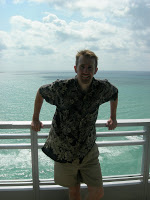 We are heading to Tampa for the weekend to visit Beef! Yippee Skippee!!