We have completed 154 miles of VA! 854 left of the whole trail! And we just celebrated 3 months (94 days) on the trail! Seeing the numbers just feels like amazing progress!!

Tonight, we are staying at a hotel in Waynesboro, VA. When we walked into the room, it smelled of alcohol cleaning products. One hour later, it smelled of hiker funk!

So Waynesboro has a big reputation on the trail. It is home to Ming’s all-you-can-eat Chinese buffet. We have been hearing about Ming’s from NOBOs since Maine. It always felt so far away & now we are here! The buffet lived up to it’s rep and more!!

The first part of VA can be summed up like this: a zero day, hiking 103 miles over 6 days through Shenandoah National Park (SNP) in the rain, more surprise visitors and an unfortunate incident where we all got separated by 10 minutes on the trail.

Last Thursday, we took a zero in Front Royal, VA, at Fire Marshall’s house and were spoiled immensely by his family. Even his extended family welcomed us with open arms.

So we took care of some gear issues (I got new shoes!!), ate awesome BBQ, Apple House (the family’s reataurant) donuts, cookies and other specialties, ate super awesome Thai food, drank 9 gallons of sweet tea and rested up. Which, of course, made it very hard to get back on the trail Friday. Especially because the 30% chance of rain translated into torrential downpouring …

Shenandoah was pretty exciting to walk through, except we did get a lot of rain or threat of rain. In fact, the park got at least 4 inches of rain in just 2 days! Needless to say, the weather could have been better. We basically got a very spooky view of the Shennies.

When we did have some break from the weather, we saw some incredible views.

One high point of SNP was having occasional access to food/restaurants. We took full advantage when we could.

Wildlife has been abundant, to say the least, in SNP.
8 Bears (2 of the bears were up in the trees and scurried down backwards when they heard us walk by! Man they move fast!)
27 Deer (you could walk right up to them and they won’t budge. Deal keeps asking them to carry his pack, but hasn’t succeeded.)

The shelters in SNP were built in the 1940s and it shows. There are many residents, like vampire bats, generations of mice, and wolf spiders.

However, Deal still reluctantly chose to sleep IN 2 of the shelters because of the rain and crowds. When possible, though, he set up the tent in the shelter to protect us …

We had a very entertaining night at one of the shelters. We shared shelter/tenting space with a group of students from Princeton on their first of 7 nights backpacking. Clearly they don’t teach outdoor smarts at the ivy league schools because it took 7-10 students over an hour to hang their food bags from the bear pole provided at the camp. Now I know most of our readers are saying, “I have no idea what a bear pole even is,” but I assure you it isn’t rocket science, although they made it that way.

We also had a great surprise from the Great American Family (our friends from Danville) while we were in the park. Cell service was pretty much nonexistent, but I turned on my phone one day and got several messages that two of them spontaneously decided to meet us on the trail for a night! Not only did they bring cherry cokes (not a prerequisite, by the way), but Bolt (the father) cooked us one of their specialty backpacking meals – chicken & dumplings! I kept ragging on him about his big pack for just one night, but it was because he was carrying enough dinner for 5 people!! It would have been enough just to share a night of camping with them, but food we didn’t have to cook or clean up ourselves was a bonus! 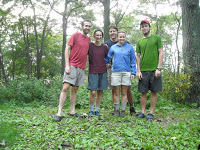 And now for the last part … One little hiccup. Hopefully I can keep the story comprehendible (it certainly will not be short!)

So we all know how Deal likes to dig his holes. Well, yesterday he announced he was going into the woods to do his business. Since it was raining, I decided to keep hiking with Fire Marshall. We got to a road crossing and didn’t read the trail sign correctly, so took a wrong trail. We didn’t get too far and when we returned to the right spot, we decided to wait for Deal so he wouldn’t get confused too. 15 minutes went by & we decided Deal must have passed us when we were off trail. Fire Marshall went way ahead of me to try to catch him, got to a shelter & saw a note in the log book from Deal saying he was pressing on to find us!!! The time read 1:41 & Fire Marshall got there at 1:55! So he dropped his pack and hoofed it down the trail in search & rescue mission style. It took a full mile before he caught Deal! Meanwhile, I got to the shelter at 2:07 & realized what had happened. We all were reunited within the next 30 minutes, but boy oh boy! Mind you it was raining buckets at this point.

The lesson in all this is to stay close to your man, just not too close …