Friday the 13th, an ominous day known for bad luck. Instead of just one day, though, how about we’ve had several “Fridays the 13th” in a row.

First, Deal was driving our new car and got a ticket. Not just any ticket. His first EVAH.

Then, a few days later, Deal was driving our brand-new, shiny car at a stop waiting to cross traffic, when BAM! Some lady turned into the car and smashed the bumper. She says she didn’t even see the beautiful, shiny car that was apparently in her way.

Then, a few days later, ADT called and said, once again, someone has tried to break into our house. Tried is the operative word because they were deterred by the blaring alarm, thankfully. But, come on! We’re thinking about just putting plexiglass in the windows.

Last week, a couple of friend’s mothers/grandmothers passed away. Three to be exact. Cause those things happen in threes.

This week, a certain cat passed away. Not our cat. Not that we would know since he is still mooching off my parents.

Things could be worse, they could be. Let’s just say 2012 has not been the best year so far. There are still 8 months left for redemption, so fingers crossed.

And there are good things, I promise. Mouth/Chris and NHBound (But Not Really)/Kayt spent the night at our place for Easter. We got up in the morning and had a massive Easter Egg Hunt. Okay, that’s not true at all. But we did enjoy the beautiful sunset from our overlook, hung out around the fire and just had a great time catching up. Later in the day, Redwing/Scott and Hopeful (Marie), the former caretakers, invited us over for a late lunch and we got to know more and more people in this local hiking/hostel community. It was a non-Friday the 13th kind of day. 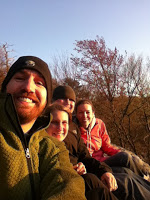 As you may have noticed, just about another 2 weeks has passed without a blog post. Let’s just call me the biweekly blogger. I am comfortable with that. I’ll type at ya in 2 then!