Published September 4th, 2012 under Concerts  Visitors - no responses
We’ve created this dangerous tradition with Deal’s friend TheHoss/Jason
and his girlfriend Accessory/Adrienne … going to the Jimmy Buffet
Concert!!!!!! Our third round happened this past weekend! 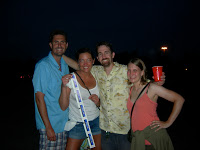 This is actually my 4th Buffet concert and Deal’s 10th, or 20th. I don’t party
often, especially now that age keeps creeping up on me. But for some
reason, partying never gets old at the Buffet concerts. Give me a
margarita, chips & salsa, and I am happy as a clam. 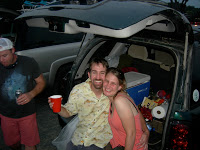 Tailgating was fun, but it was different than it has been in the past.
Jiffy Lube Live in northern VA is quite possibly the worst concert
pavilion ever. First of all, they did not let patrons into the parking
lot until 3pm for tailgating. That is a no-no for Buffet. People were
tailgating in local business parking lots. Chaos.

We got there at 2pm and mainly drove around, parking in a spot until the
cops kicked us out. We waited until getting into the lot to break out
the food and drinks. We did get a primo spot in the lot by luck, but
they were parking cars so close. It was supposed to be a 10-foot section
for tailgating purposes, but it was less. And they had restrictions on
what you could bring. For example, no pop-up tents. People, it was a hot
mess out there. And drinking in the heat is never a good thing. 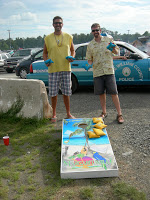 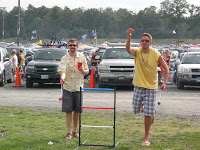 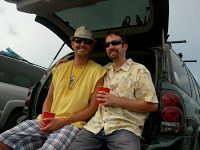 Luckily for me, Accessory is none for bring several changes of clothing
for the day. Last time we went to Buffet, she changed 3 times. Anywho, I
sweated out my shirt and it was disgusting. She was nice enough to lend
me one of her outfit changes!!

The hot mess continued when we ventured into the concert. For whatever
reason, it was a cattle herd getting through the gates. For 30 minutes.
Sweat was being exchanged between strangers. It was downright nasty.

Once we broke free of the crowds and entered the lawn section, we
realized this concert was very crowded! There were no lawn spaces left.
But, Accessory led the way to some roped off section where there was not
a single person and we made themselves at home. Can anyone tell me what
V.I.P stands for??? So, we enjoyed the concert and will be back for
more sometime (just not at Jiffy Lube Live).

FYI, TheHoss and Accessory did not encounter any snakes while they were here. They did encounter snake SKIN (outside) …