Published January 2nd, 2015 under International Travel  Te Araroa (TA) - 2 responses
Hello from Waitomo Caves! We have traveled just 100 kilometers, or 60 miles, from Hamilton. It was about 60K of roads, 45K of forest and the rest was mixed farmland and paved paths. We are now at 890K!

We are staying at Juno Backpackers and taking a zero day today (Saturday) so we can play tourist again! Yesterday afternoon (Friday), we explored the famed Waitomo Caves. J & I have visited a fair share of limestone caves in the states, but never have we seen any glowworms. That’s what NZ caves are famous for. Glowworms are the larvae of the fungus gnat. While in the larval stage, the fungus gnat have luminescent organs that produce a light. Insects are attracted to their light and they feast on the unknowing insects to grow bigger and bigger and emerge as an adult fungus gnat. I only have 2 pictures because photography wasn’t allowed. 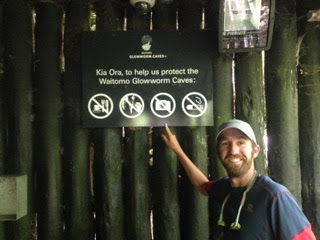 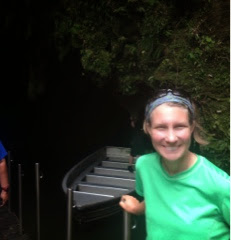 Today, we are going blackwater rafting here in Waitomo and those updates will follow.

The overall theme for this short week of hiking was peaks and valleys. Not only in the literal sense, but also in the metaphorical way. I’ll just walk you through our days and you’ll easily figure out the ups and downs.

On Monday, we reluctantly left Paula, Michael and Nathan’s house in Hamilton, but were excited for our day playing tourists in Hobbiton. The tour was a last-minute decision. We wanted to do it, but we couldn’t figure out the logistics of it. Then Paula offered to drive us to Hobbiton and we could take a bus back to Hamilton. It seemed the stars were aligned when we called the tour company and they said they had some cancellations. As I wrote in my last post, the tour was fantastic!

I also want to say that we really liked Hamilton. I actually would love to come back sometime and do more exploring, like at their rose gardens, which won as the best in the world. In any case, Hamilton left a great impression.

Fun fact about Hamilton, Richard O’Brien lived here and this is where he dreamed up “Rocky Horror Picture Show,” while working at a theater. 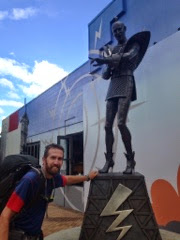 Back to Monday. Our plan was to do the Hobbiton tour and return to Hamilton by 5ish and hike for a few hours. Paula hooked us up with a friend’s house on the trail where we could camp on their lawn. Well, we miscalculated the kilometers, so instead of having 10K to the friend’s house, we had 20K (12.8 miles)! This we didn’t realize until we were an hour into the hike or so. At around 8pm with about 10K still left, it started pouring rain. We were able to run under a (closed) gas station roof for cover. We sat there until the rain stopped, and now it was dark. So we walked down the road and found a less than suitable camp spot, defeated and disappointed in our calculations.

Tuesday we woke up refreshed and excited because we were getting picked up that day by our friend’s cousin. Since we didn’t make it as far as we had hoped Monday, we had 16K to do. We called our trail angel and arranged the pick up time. The first 10K flew by and we were starting to think we would be to the pick up point way early. Then we got turned around. We were going through farmland and there was a note on a gate saying the trail went that way. We checked our maps and could see how that would be possible. We were happy to see orange markers after a bit and went on our way. However, after a few kilometers, we realized we went in one big circle. Grrrrrrrrrr. I’m not going to lie. In addition to some profanities, there might have been a few tears.

My mini breakdown was forgotten after our trail angels, the Campbell family, picked us up. As I said in my last post, this was our stateside friend’s (Bobby/Bolt) cousin’s husband’s father’s house in Te Awamutu. The cousin (Jan) and husband (Mike) were actually in New Zealand visiting Mike’s father (Terry), so we got to meet everyone. They seriously spoiled us. Terry’s wife (Sam) kept trying to feed us, and there were no complaints from us on that. We also picked up our maildrop full of more dehydrated meals, as well as a few Christmas cards from family, which was a really nice. And, J’s sister surprised us with a monocular, which will be very useful in spotting those orange trail markers! Oh, and there was a razor in our package, so I got to shave my armpits for the first time in 35+ days!! 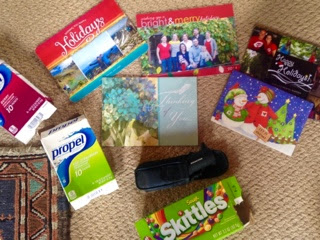 Christmas cards, snacks, a razor and a monocular! Super!

On Wednesday (New Year’s Eve), we reluctantly left the Campbell’s home after Mike cooked us breakfast. Mike and Jan dropped us at the trailhead and wished us happy trails. 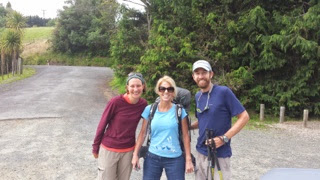 Jan tried on my backpack and told me I was a rockstar for carrying it! I should mention that those pictures of the Campbell family in my last post were hijacked since I hadn’t gotten any pictures of the whole family. 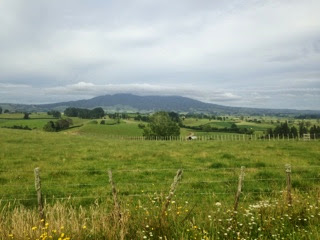 Weather looks appealing up there, huh?

The trail up to the top was nice, aside from our very heavy packs since we had some extra goodies from our mail drops. There were even a few boardwalk sections. But, we heard horror stories about the trail down the mountain and were worried about it, especially because it was drizzling when we got to the top. 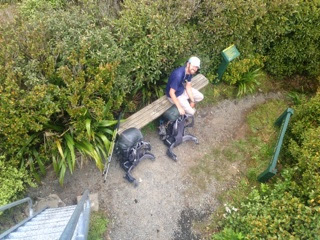 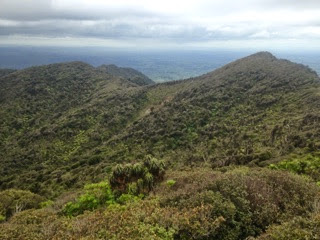 Some nice views from up top

The trail didn’t end up being too horrible, but this is where J broke a pole. It was muddy and steep as usual, with mud so thick I’m surprised J was able to find the broken piece. He has fixed it enough to use it, but it won’t be long before it breaks again. 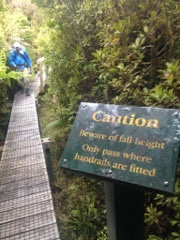 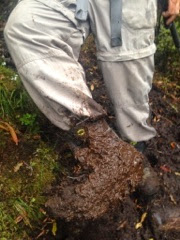 This mud could eat a whole person, let alone a trekking pole!
If the broken pole wasn’t enough, J’s sleeping pad died. A dog had bitten off the bite valve (long story), and it is beyond mend. If the sleeping pad wasn’t enough, the Velcro on J’s gaitors no longer sticks. Last but not least, his shoelace broke. Ho hum. 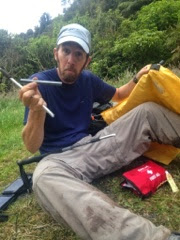 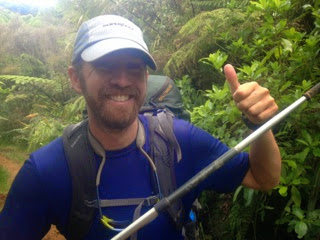 J was able to fix his pole for the time being! Fortunately, a replacement sleeping pad and pole are on their way, but that won’t be for at least 10 days! We figured out a way to share my sleeping pad, but it’s not ideal as you can imagine. 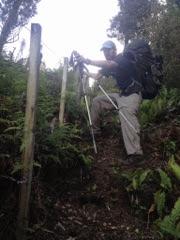 Good thing NZ fences are so well made and look at how well J’s mended pole is working!

We’ve made some new trail friends too. If you remember, we were hiking with Matteo from Italy and Marilyne from Canada. We haven’t seen Matteo since before Auckland because he took some time off as well and is now 1-2 days behind us. As for Marilyne, we parted ways with her in Auckland because her husband came to visit for the holidays, so they jumped ahead to do the canoe section of the trail. We hope to see Matteo and Marilyne at some point again. But in the meantime, we met Ole, a German who has been 1-2 days in front of us since we started. He had taken a few days off in Hamilton with a trail angel family that took him in, so that’s how we caught him at Mt. Pirongia. We spent a few days with Ole after that. We also met 2 guys from Israel (Nadav and Goni) while we were in Waitomo. We all share the same sentiments about the trail:) 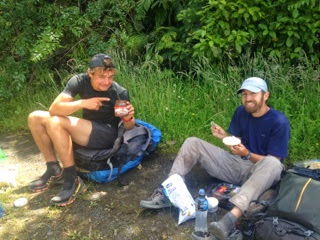 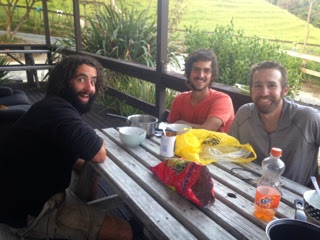 We stayed in Waitomo with Nadav and Goni

So highs and lows. Thankfully, the first days of 2015 (Thursday and Friday) were much better. And we always are trying to find the positives even when there are lows. “At least we are in the shade.” “At least the fences aren’t electric.” “At least there is a shoulder on the road.” “At least the mud isn’t so thick today.” “At least the river is only shin deep (see video).”

People keep asking if the trail will get easier, and I don’t expect it to. In fact, in this next section we have 51K of straight road walking and another forest where other TA hikers have reported getting lost. We won’t have any access to services for 7-8 days, so if you don’t hear from us in 10 days, call the authorities (kidding).