Published February 19th, 2016 under International Travel - 3 responses
I have something a little different on the blog today … it is an interview with someone about their first-time trip to the good ol’ ’Merica.
Can you imagine coming to America for the first time? What would be your first impressions? Our Kiwi friends Max & Lyn took a 6-week road trip around the US of A (that’s what they call it) this past fall and I thought I’d share their thoughts. 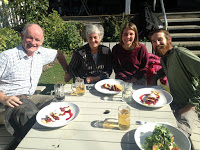 Spoiler alert: they loved it with their favorites being deer sightings, blues music, dancing, and American football (not rugby football) games.
Q: How long was your trip to America?
A: 2.5 months. We picked up a car in Las Vegas and ended up in Fort Lauderdale, Florida, where we took a 15-day cruise back through the Panama Canal to LA. We flew home the day we landed in LA. 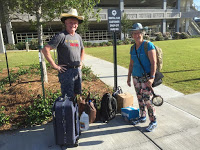 Q: Did you use a GPS to get around? (for the record, GPS is not commonly used in NZ)
A: No GPS! Max and I picked up our car in Vegas and sat there for some time in the parking lot. We had to return to the desk, as we couldn’t understand the written instructions on how to turn this way and that to get out of the garage – not a great start! But, the best thing about not having GPS is that we spoke to REAL Americans to ask our way and when we did turn the wrong way, it was always an adventure getting back to where we wanted to be!
Q: Did the traffic on our highways and in our cities bother you?
A: Never a bother – we stayed off the very big highways as we wanted to see the countryside. But, we also did drive the odd, large highway and when we did, we loved it. The roads are sooooo good and the speed limits soooo high, but always appropriate for the condition of the highway. Overall, the traffic was VERY polite—much better drivers than in this country! We didn’t really go into too many big cities either. There were 4 drivers—Lyn, Max, Madelaine (Max’s sister) and Rodney (Madelaine’s husband). We each only drove for an hour. When we changed drivers, we always accepted that the other person in the front seat was the co-driver. Great to have a second pair of eyes looks out for signs, speed limits, other traffic.
Q: What was the most surprising thing you learned/experienced in America?
A: The amount of wildlife we found outside of the National Parks – especially the deer we saw everywhere and everyday! Remember we have no native animals in New Zealand, so seeing the wildlife in Yellowstone and all over was VERY exciting for us! 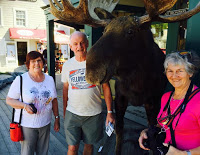 Q: Did you find travel in America to be expensive, the same or less than other places you’ve traveled?
A: More expensive than we had anticipated but pretty good – I guess on a parr with our last big trip (to France).
Q: What was your favorite state in America?
Texas. We loved the people, the cowboy attitudes, the football, the music and dancing in the old dance hall at Austin, Texas. Great to see young and old dancing. Love the Texan Two-step!! 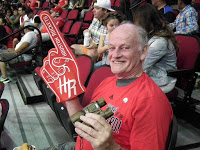 Q: What was your favorite city in America?
A: New Orleans for Frenchman street, but also Memphis Tennessee for the music and dancing on Beale Street. We were only there one night and wished we’d had more time there.

Q: What was your favorite attraction in America?
A: Hearst Castle California and the Sea Elephants on the beach just north of the castle. Or maybe the Grizzly Bear and Silver Wolf Sanctuary at the west gate entrance to Yellowstone Park.

Q: What was the best meal you had?
A: I’m afraid we were not impressed with the meals! Where we were staying for a few nights, we would buy food in the Walmart or such and cook ourselves. We ate generally in a mid-range quality restaurants and found them to be clean and reasonably priced, but the food choices – ummmm, well too fried, always chips fried this and fried that… and never enough vegetables for us. We gained 4kg!!!! 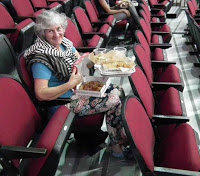 Q: Who was the most interesting person you met?
We stayed at “Airbnbs” and several times stayed with American families, which was lovely. But the most interesting person was a rice farmer in Texas. We didn’t even know they grew rice in the US of A, let alone in Texas. He was retired but was still refereeing college football every week and sometimes several games a week. He traveled many miles from his home on the western side of Houston to games all over the district on the eastern side of the city, while newly married and living on the western side – crazy – very hospitable and kind to us. He and his wife immediately invited us to stay, which we did on several occasions as we drove about the eastern region of Texas.
Q: Did you have any negative experiences?
A: Not a one that I recall. It was a fantastic trip and we loved every minute of it.
Q: With all the travels you’ve done, why did you wait so long to come here?
A: Neither of us have ever had a desire to travel in US of A – maybe the typical American we see and hear in NZ are off bus tours and tend to loud and large – a bit overwhelming! Or maybe it’s the security thing. I do remember just prior to departure wondering why we were going there with all that shooting of each other, but of course we never felt unsafe anywhere we went. We only ever saw one person (civilian) carrying a gun in a holster – Lockhart Texas in “Black’s best BBQ” restaurant – I must say it was a shock….. and he had a knife in a holster on the other hip, but he looked a perfectly ordinary person about our own age. Did I feel safe seeing him there with a gun? Well NO! I felt less safe. Overall, the hospitality was fantastic – we loved the people – they were always gracious and welcoming.
Q: What this the one story you’re going to tell all the people back home over and over again?
A: How in the Cat’s Club on Frenchman street we chatted with a group of people who it turned out, had travelled all the way from New York to hear the band playing that we had been listening too for some time that evening – not realising just how good they were! The group we spoke too were also musicians and they popped in and out of the band and took over various instruments which was very cool to see and hear such talented people.
Q: Would you come back?
A: Tomorrow!!!! But we need to find a pot of gold first!
I was so glad to hear of their positive experience, especially since we always boast about the amazing hospitality we experience in New Zealand. When you are traveling–and especially hiking as we were–anything is welcomed. We were grateful for everything from the “good on you” calls from the street to cold water on a warm day to a warm and dry place to sleep on a cold day.

Max and Lyn were 2 of the people who showed us NZ hospitality … they met us as we were hiking a road portion of Te Araroa. In the 5 minutes we talked, they invited us to their home in Christchurch after we finished trekking. They ended up housing us for 2 days and driving us to the airport in the early AM. I wish we could have repaid the hospitality while they were in America, but our paths didn’t cross. It was interesting to hear their perspective.

There were also so many interesting things I noticed during our 5+ months walking across New Zealand that differed from America. There are no screens in their windows. People always said at least “hiya” when passing on the streets. The telephone poles were concrete. Few people have dryers and line dry everything. Public restrooms were impeccably clean (you could literally eat off the floor).

For the record, I love it in NZ. But I also love it in America and think we have a lot to offer. I am honestly relieved that Max and Lyn came away with a good impression of the US of A.