J & I are on a quest to hit all the national parks, but often times, we overlook the monuments. So we were elated when we realized Bandelier National Monument was just about an hour from our doorstep and last weekend, we made the trip to explore.

Bandelier is most known for its prehistoric ruins and unexcavated archaeological sites. Remember that supervolcano that I mentioned referencing the Jemez Mountains surrounding where we live? Well, that same volcano had a lot to do with the formation of Bandalier. Its ash left behind several rock types, including tuff (a soft red rock), pumice (J’s favorite foot rub accessory) and obsidian (volcanic glass – almost like black onyx). The Native Americans built their homes into the rock and lived off the land. 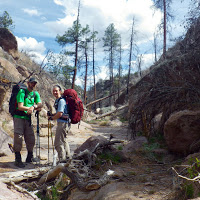 Today’s leftover cliff dwellings and petroglyphs from the Ancestral Pueblo people tell the story of more than 100,000 years of human occupation in the canyons. These Native American homesteads are so cool, even Indian Jones would be mesmerized.

Because these preserved ruins are easily accessible in the front country of the park, few people head more than 3-4 miles past the visitor center, leaving the backcountry virtually untouched. We climbed the mesas to get a bird’s eye view of the dwellings, then scampered in and out of Lummis and Alamo canyons across the desertscape on a 16-mile loop trail. This route passes Yapashi Pueblo, which is an unrestored site with only a small foundation remaining from the 350-room dwelling. 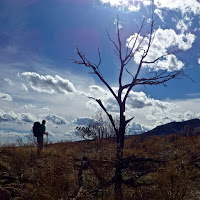 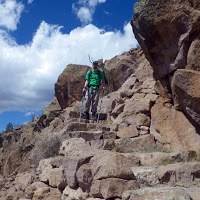 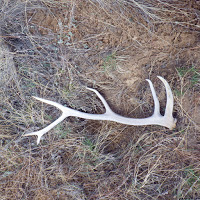 In 2011, the park was ravaged by both the Las Conchas Fire and subsequent flooding. The burn sites are slowly regrowing and the trails are still being cleared and repaired. In fact, we came upon some equipment left behind by park maintenance. We would normally “pack it out” in an effort to leave no trace, but these items were a bit heavy. We instead wrote down the coordinates and notified the park rangers. 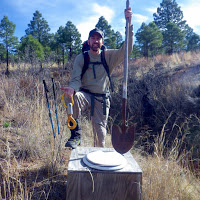