Once upon a time, I told Justin that my 20-year high school reunion (more on that in another post) was taking place in New Jersey the week of his birthday and I really wanted to go. Not only did I want him to accompany me to the reunion, I didn’t want to leave him for his special day.

“Spend my birthday in New Jersey??? EEEEEEW,” was basically his response.

Given it was his big 4-0, I wanted to make as big of a deal as I could. If we stayed in New Mexico for his birthday, we would just be working. I couldn’t even take him out for a nice meal, since we live in the middle of nowhere.

I sweetened the deal for a trip to New Jersey as much as I could.

“I’ll throw you a birthday party with all your friends,” I tempted. “And, let’s go down to Atlantic City for a little getaway.” If only there was a From Good Home concert and he would have been immediately sold.

Thankfully, he took the bait and off to New Jersey we went last week.

The week started with a birthday party hosted at his buddy’s house. I’ve mentioned this on the blog before, but J attended a private high school in New Jersey (Seton Hall Prep). Most of us walk away with only a handful of good, lifelong friends from high school, but I am always amazed at the solid high school group of friends still in tact after 20+ years. The truth is, these guys can’t end their friendships because they have so much dirt on each other. Kidding (or truth) aside, they are good eggs and are present for each other. A few of these guys drove from several hours away to come out and celebrate (missed you Beef!). 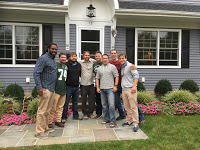 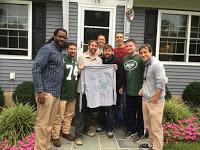 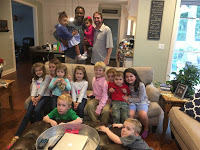 One of the boy’s daughters even shares a birthday with J! 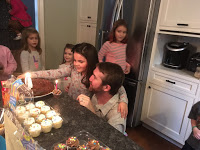 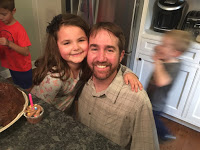 The Seton Hall Prep crew wasn’t the only family we saw while in New Jersey (some not pictured). 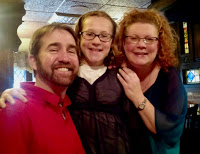 Our niece and my sister share October birthdays with J, so there was even more reason to celebrate together!

My aunt and uncle were in from Alaska the same week and brought my Nana out for a lunch date. 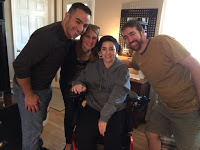 Justin has known these 2 family friends since he was a teenager!
The party wasn’t the only way to celebrate. We treated ourselves to a 2-night getaway in Atlantic City. Even though I grew up in New Jersey, I have not spent a lot of time down in AC. It has had its ups and downs, but I was pleasantly surprised. We took long walks on the beach and boardwalk, ate seafood and tried our luck in the casinos. Let’s just say we made a small donation to them. The birthday boy’s usual card-playing luck was noticeably absent. 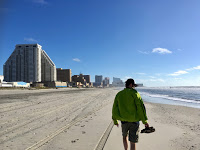 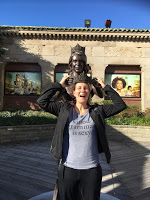 All in all, I am happy to report, J was pleased with his birthday celebrations and keeps saying how memorable everything was for this 40th.

One response to “Birthday Celebrations”