Thirty-seven years and one day later, we climbed that darn volcano! 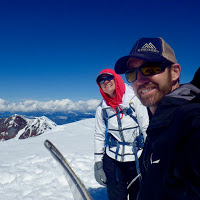 For your history lesson of the day, I will share our newfound knowledge that it all started with a 5.1 magnitude earthquake, which disrupted the volcano with the biggest landslide in recorded history. For days, officials evacuated homeowners and monitored the mountain, watching seismic patterns. On May 18, 1980, it erupted. The entire catastrophic event killed 57 people, obliterated animal populations, flattened 230 square miles of forest and blew 1300 feet off the mountaintop.

What’s left of the mountain stands at 8,328 feet and is a very popular–albeit a beast of a–day hike.

You need a climbing permit for Helens from April 1 to October 31 and they go on sale starting Feb.1. They sell 500 permits for each day and our chosen day (May 19) sold out within 48 hours. Thankfully, not all 500 climbers showed up (apparently there was a high reported avalanche risk, but we saw none of that).

We snagged 3 permits, thinking we may be able to convince someone to join us. Turns out, we didn’t have to do much convincing! My cousin’s husband, Jeremiah, who lives in Seattle, had been up the mountain a handful of times and was up for another notch on his belt. 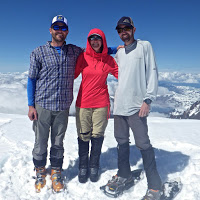 Being that we are still early in the season, we had to climb from the Marble Mtn Snowpark, so our roundtrip mileage was 12 miles. The volcano is not snow-covered year round, but even though the trek up it is shorter during the summer, I’m going to venture to say it’s a little harder because you are climbing rocky terrain, then ash and pumice nearest to the top! In this case, I’ll take snow travel.

Recent climbing reports advised us to use snowshoes for the climb because of the soft, mushy snow (or skis, but we are not skiers; Jeremiah skied). We carried crampons and ice axes, but didn’t need them because the snow was so soft even all the way up to the summit. 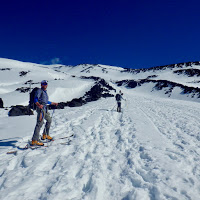 This was only the beginning of the climb!

It was a long, long slog of a day. It took us 11 hours for the whole roundtrip!!! Jeremiah and Justin could have cut their time at least by a few hours, but I needed multiple breaks.

Jer taking a break and showing some leg 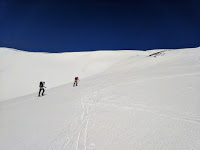 Photo credits for the last 3: Jeremiah

At the top, you can peer down into the mile-wide caldera, which is still smoldering! However, my quads are still trying to decide if the view is well worth the effort …

Thankfully, the way down was made much easier by a little “glissading” (definition: sledding on your butt).

Stay tuned for our last outdoor adventure of the week … as a teaser, it involves both of us climbing another mountain, but only one of us making the summit. Any guesses who reached the top???