When you think of the whole United States, most people don’t realize just how far north Alaska is. Go take a look at a geographically correct map. Cue collective “WHOA”

There are only so many ways you can drive to Alaska and most journeys take days (even the ferry). And while we didn’t rush, we also could have taken way longer. But hey, we are working, so the 8 days was just right.

Our road trip started at the Sweet Grass port of entry into Canada from Montana (and yes, we had a smooth border crossing; we worried for nothing). 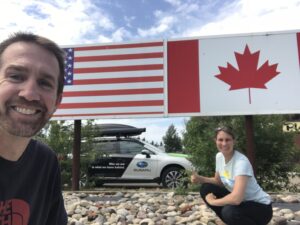 That direction took us up through Calgary and the real reason we chose the route: a chance to visit Canada’s Banff & Jasper National Parks.

Seeing the movies that come out of the Banff Mountain Film Festival (which tours the US) is always a highlight of our year, and we’ve religiously attended every year since 2010. So we have been salivating about visiting the actual site of the film festival (Banff National Park) for nearly a decade. 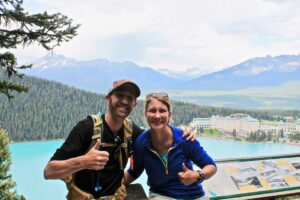 Banff National Park was actually Canada’s first national park, created in 1885. We spent only a half day in Banff, mainly trails around the town, particularly visiting the birthplace of the park (Cave & Basin Hot Springs) and a few waterfalls.

From Banff, we drove the 140-mile Icefields Parkway that connects Banff with Jasper National Park. We definitely didn’t allot enough time to see all the Parkway has to offer. It is, by far, the most scenic drive we’ve ever, ever driven.

The drive includes the Canadian Rocky Mountain Range, lakes and waterfalls, of course, but also GLACIERS (be sure to insert French accent for that word). We-we!

Our main goal was to see glacial-fed Lake Louise in person (behind us in above picture, then below). The photos of it look unreal, and we just had to see if it is for realz. We are not the only ones with Lake Louise as our main goal. It is insanely crowded, so much that the park runs free shuttle buses to visit it. If you want to park at Lake Louise, you need to get there early than 5am, or go in the winter. We wanted to also see nearby Moraine Lake, but it’s the same story: super crowded and best accessible via a shuttle bus. However, since the shuttle bus waiting eats up so much time, we opted only for Lake Louise. Once at the lake, we hiked the Fairview Trail (1.5 miles roundtrip) to see the lake from above and partially escaped the crowds! 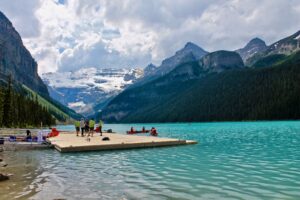 Continuing up the Icefields Parkway, we stopped at many other high points in both parks: Crowfoot Glacier & Bow Lake, Peyto Lake, Athabasca Glacier, Tangle Falls, Athabasca Falls … So much to see, so much beauty, so little time! We also visited the Columbia Icefield Discovery Centre, with lots of great info about the whole area. The Columbia Icefield—the largest icefield in the Rockies (125 square miles)—feeds 8 major glaciers, the source of water which eventually flows in the Pacific, Atlantic & Arctic Oceans! Kind of inconceivable!! 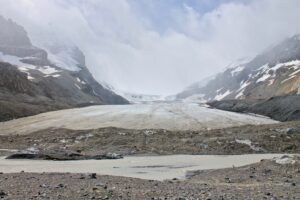 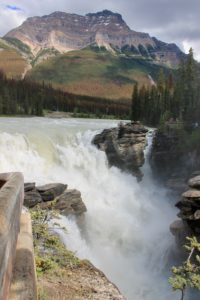 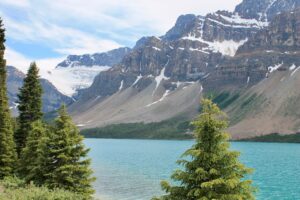 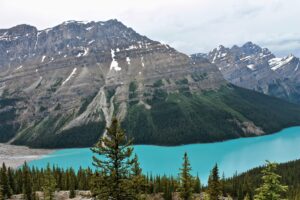 You could probably enjoy the Icefields Parkway almost as much never even leaving your car because the drive is just amazing (I can’t stress it enough). Most of our pitstops were pop out of the car and walk the short distance to the overlook, but of course someday we hope to get into the backcountry. We did manage to squeeze in a few of the actual hikes gaining mileage, like the 3.25-mile Valley of the Five Lakes in Jasper NP. 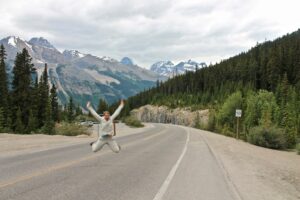 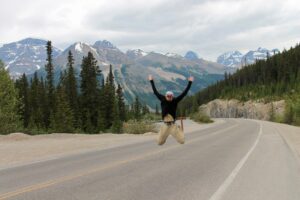 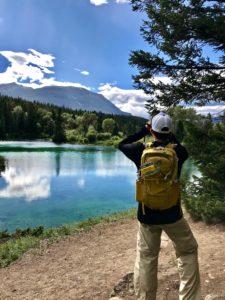 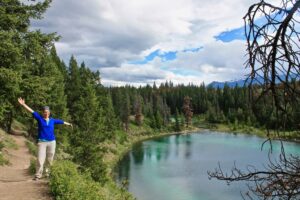 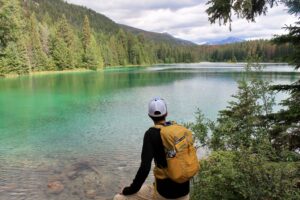 Basically, we’ll just keep Banff and Jasper National Parks on our bucket list because we could go back 10 times, and still be in awe.

The excitement of our drive didn’t end with those parks. We took some beautiful backroads and started the famed 1390-mile Alcan (Alaska-Canadian Highway) in Dawson City. 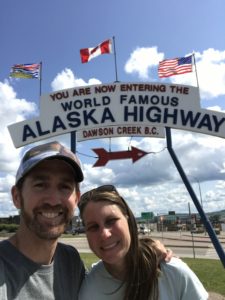 The Alcan has many highlights and the first was Liard Hot Springs. Justin had stopped there in 2003 and it was just off the road in the wild, no charge to enter. Now, it does cost $5 per person to go in and it’s more “managed,” but there’s a changing room, bathrooms and really it’s in the middle of nowhere, so only the crazies driving to Alaska are around to enjoy it! 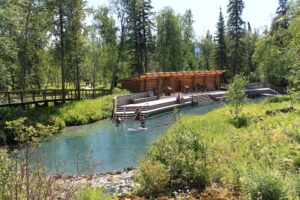 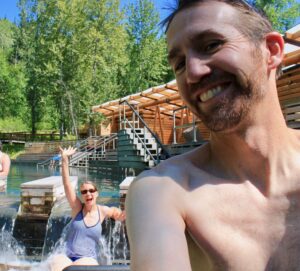 Next up was Watson Lake Sign Post Forest. Back in the 1940s when they were building the Alcan, one U.S. soldier was working on signposts, and added a sign indicating the direction and mileage to his hometown in Danville, Illinois. The trend caught on, and now there are more than 83,000 signs in the “forest!” 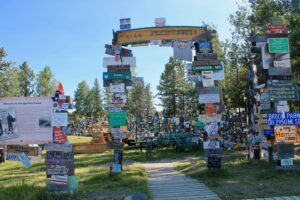 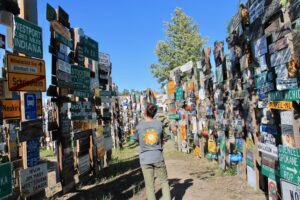 The views just never got old through the entire trip. And in terms of wildlife, we had 11 bear sightings (no grizzlies, but they are there), including 1 black bear that ran out in front of our car (nice work on keeping us safe, Subaru Outback!). 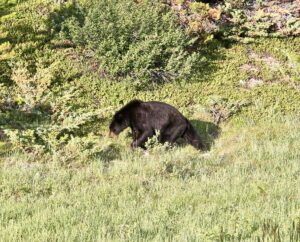 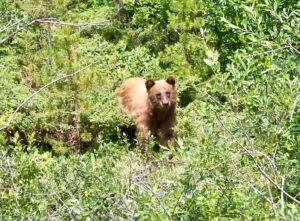 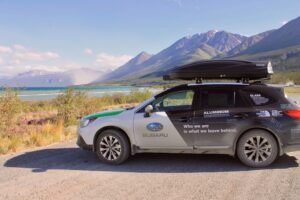 And now we are in Alaska, working in and around Denali National Park through mid August! 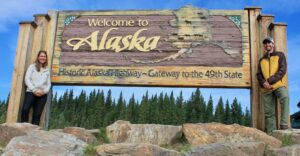 4 responses to “Northbound Drive To Alaska”