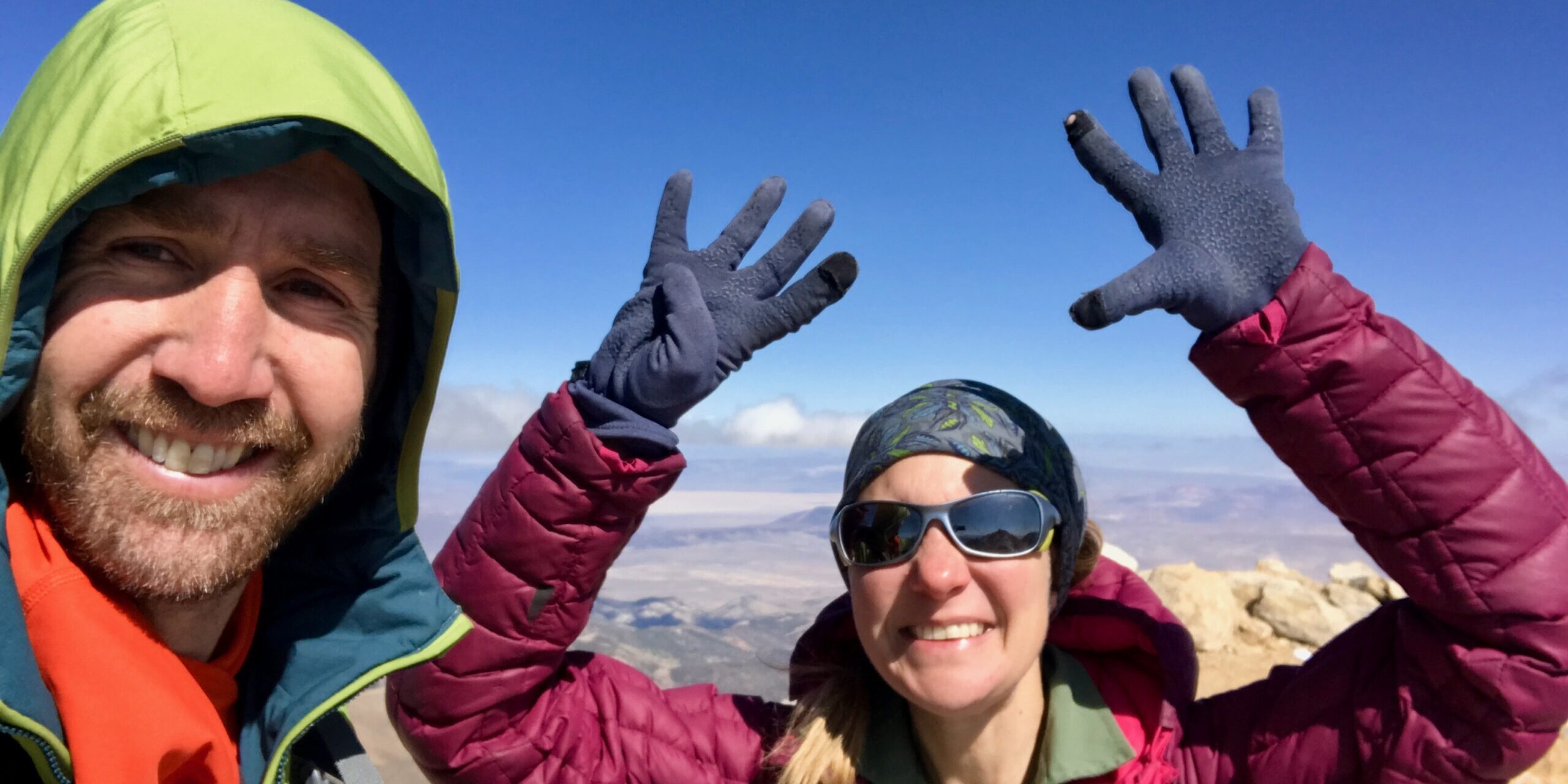 Last year while driving from Yosemite, CA to Boulder, CO after the Zero Landfill Tour, we realized we were driving right by Nevada’s state high point. We didn’t have the time, nor had we done the research, to do the trek then, but this year when we realized we’d be taking the same driving route, we knew we had to make it our goal.

Nevada’s Boundary Peak is one of those highpoints rated as difficult, not only because of its elevation (13,147 feet), but because of the roads to get there.

There are 2 jumping off points to hike to the top of Boundary. Both driving routes are dicey, notoriously needing 4WD or AWD with high clearance.

We chose Queen Mine Rd because people deemed the road & trail in better shape the last few years. If anyone has come to this blog post for driving directions, note that there’s no sign for Queen Mine Road when turning off 6. There are 2 abandoned buildings with an oil tank labeled “Janie’s” and “JR.” Turn east onto the unmarked road and follow it 7.2 miles to the trailhead. However, you can just make it easier for yourself and put in “Kennedy Point Esmeralda County Nevada” in your mapping program.

The first part of Queen Mine Rd is just gravel 2WD, but then it narrows with a number of deep washes to navigate. There’s lots of mining remnants along the road–old shafts, buildings & equipment. This area was rich in gold & silver mining back in the day.

We decided to stop at mile 5.9, right before the road corkscrews up the mountain. Even though we have a Subaru Ascent with decent clearance that could have made it, we were fairly weighted down & the last bit has deeper ruts & bigger boulder obstacles. We decided hiking the extra miles and elevation was just as stressful as off-roading! Plus the campsite was clutch at about 9,300 ft.

We hit the trail at 8:30am with temps topping out at 24 degrees. Brrr. Thankfully, there was only a light breeze.

The first mile on the road to the official trailhead at about 10,000 ft flew by. We signed in at the register, then were on a nice beaten trail and gradual uphill through occasional bristlecone pine tree stands and 360-degree views of the Sierras in CA & rest of Nevada.

You won’t really notice it, but the trail loses about 300 ft of elevation and drops you at the Trail Canyon Saddle (10,800 ft). This is where the other trail from the east side intersects. It also makes for a beautiful rest stop within a small rock/bristlecone pine log shelter before the real climbing begins. We didn’t have much wind, but I imagine it could be brutal & this would be welcomed.

The next section involves 1000+ feet of distinct switchbacks up 25-degree scree slopes. Scree is my nemesis and it was definitely a hard climb with the increasing elevation and lack of oxygen, but we’ve been on much worse scree slopes (I’m shaking my fist at you, Borah Peak in Idaho).

There’s another nice level and sheltered rest spot at 12,100 feet. As we were catching our breath & normalizing our heart rate, we heard a rumble in the seemingly cloudless sky. It didn’t sound like your typical thunder. We could see non-threatening clouds way in the distance over CA, but still felt it couldn’t be thunder. Another 2 rumbles alarmed us, then we realized this wasn’t thunder. There were explosions (probably mining) in the distance! We even spotted a plume of smoke through our binoculars. Two more rumbles persisted. It was unnerving given the fact we were in the midst of potential rockslide area, but felt far enough away to be uneventful.

We proceeded to follow the ridgeline on a distinct path to 12,800 ft, which brought us to the “choose your own adventure” part of the climb. We actually took different paths there & back, but nothing was more than class 2 scrambling up and over larger talus and boulder blocks (again, nothing compared with Borah Peak).

The last section to the summit was mild compared with the rest.

I’m so happy I made it!! I struggle with altitude, starting at around 9-10,000 feet. The trek was a long slog, but completely doable for a day hike, even at our slow and steady pace. Plus, we camped along the Queen Mine Road the night before and after, just to make the whole trip more doable. We were chancing it attempting the climb in October; it even snowed 2 days prior to our trip. Thankfully, we enjoyed a clear—albeit cold—day.