J and I had a near-death experience at about 6,000 feet Sunday. No kidding. Let me start from the beginning.

The father of the Is/Was family (who will now be renamed Bolt) wanted to summit Mt. Washington, the highest mountain in NH and in the Northeast, during his tr

ip (which *sadly* came to an end Tuesday). Anyways, the peak of Mt. Washington only sits at 6,288’, but is known for having the worst weather on the planet. That’s right, worse than Everest! They once recorded wind speeds of 231 mph!! In any case, many people summit it every year, even in the winter via ice climbing. I was particularly excited about it since I hadn’t been there (J has) and we are trying to bag as many high peaks across the country as we can.

So, we picked out Sunday to do it. There are many trails to take, but we took Crawford Path, a 10-mile hike along the AT that crosses 5 of the presidential 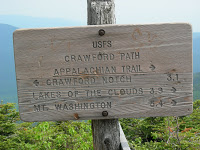 peaks above treeline (4,000’) to the peak of Mt. Washington. The plan was to meet the family up at the top since you can drive there. The weather predicted thunderstorms, but we figured we’d give it a try starting early morning and turn back if the weather got bad. Famous last words for may people trekking to the peaks of Everest, Denali and Whitney … 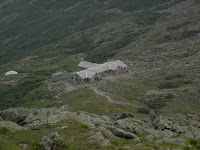 The hike was going really well. The weather looked good and the trail was a really good workout. There are 2 AMC huts along the way, one at 2 miles and one at 8 miles. Well, the weather got bad at the second hut, which was at about 6,000 feet. The hut crew advised not to press on, as we all watched lightening strike immediately followed by a clash of thunder. For those unfamiliar with thunderstorms, 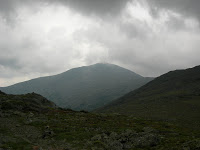 you can see how close the lightening is to you by counting the seconds between the lightening and thunder. Two seconds equals 1 mile. There’s not much reason to be concerned when you are surrounded by trees and buildings that are so much taller than you, but when you are on a mountain and are the tallest object around …

So we sat around the hut for a bit and debated. Bolt was hellbent on getting up to the summit, mostly because his family was up there waiting and with limited communication, he didn’t want them to worry when we didn’t arrive by our planned time. For a moment, it did look like the storm slowed a bit and the crew said since we were pretty fast hikers, we could probably make it to the summit in an hour. We decided to press on. The rain (hail) was still pounding us and we were traveling up on rocks, meaning we were basically hiking in waterfalls. And the fog was socked in, so we could just about find the trail and see 2 feet in front of us. In any case, the lightening was harsh. Mind you, June 22 started “Lightening Safety Awareness Week.” One minute it was 1 mile away, the next it would be right there on us. They say you have a better chance of getting hit by a car than getting hit by lightening and I’ve already gotten hit by a car, so um, I didn’t want to tempt fate. Although there have never been any fatalities on the Presidential Range due to lightening, there’s a first for everything. I was freaked out. We were only .25 miles into the hike when J and I decided to turn back to the hut. Bolt decided to move forward. Separating is the worst possible thing you can do as hikers. Not only could Bolt get hit by lightening (which actually you wouldn’t want to be too close to the person who gets hit), but he could twist his ankle or fall off a cliff. He is hard-headed though and we didn’t want to take our chances. On our way down, lightening struck close to us at least three times that we could tell. We kept ducking and waiting until it struck, then running a few hundred yards to duck again. But it was still pretty unpredictable.

J and I returned to the hut and the crew was pleased to see us, but not pleased that we let our buddy go on. About 20 minutes after constant worrying, we got word via satellite phone from the summit that Bolt made it. His family was there and of course glad to see him. He has some good guardian angels! So now the question remained as to what we would do. We could sleep at the hut, or try to summit if it cleared, but we had to get up to the top by 6pm, because all cars had to leave by then. Well, we were munching on some snacks when all of the sudden, the skies cleared completely and the rain stopped! The crew predicted we had about an hour before another storm came through so we quickly re-suited and got on our way. We did finally make it safely to the top! Yahoo! 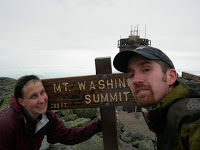 In retrospect, it may have been the scariest moment in my life, but I feel like I’ve had some vicious moments, so I don’t know. It all seemed so surreal and happened so fast. I can see why climbers on bigger mountains get themselves into trouble so much … you just think it looks so close and you can do it. But weather is a nasty thing to play around with.

If that experience wasn’t bad enough, the Is/Was Family drove us back to our car at the trailhead and drove away before we realized we left our credit card and cell phones in the other vehicle. We were only 30 miles from camp, but we had NO gas. This is typical of us. We wait until the very last minute to get it. But with no money and no phone … hmm. We chanced it and pulled in a gas station and begged for mercy. We thought maybe we could call my mom and she could give a credit card number over the phone to buy us some gas. But, the gas man was like no other and gave us 2 gallons FOR FREE. We took his address andsent him the money even though he insisted it was okay. Gotta love those Nice Hampshires! Guess it was that whole “what goes around comes around” since we picked up two hikers from a trailhead earlier (before we realized we had no gas) and took them back to their car. We will still pay it forward some other time.

Okay, I’m almost done with my rant, I promise.

We just thought that if we did die up on the mountain, our surviving families would have a lot to deal with since it was just last week that we added some life insurance coverage to our current policies. Do I smell something fishy?

Leave a Reply to The Moser Family Blog Cancel reply