He was a neat and organized man, that much we knew

Surprise, surprise, no flight delays! I think that may be a first. We did hit some turbulence, and other flights were delayed, but Southwest got three stars from me. I rarely fly them, but I’m happy we did this time.

So this weekend was kind of weird. Like I said, we went down South pack up Uncle SlickG’s deceased friend’s (Paul) townhouse. It was very odd to go through this man’s personal belongings. Here we were deciding what was important to keep and what wasn’t. It just got to me. I am a saver (I do try not to be, but it’s in my blood) and J is definitely a saver. Someday, someone is going to be going through our stuff and saying, now why the hell did she save this essay from 6th grade? Or why was J saving all these cassette tapes when he can’t even play them anymore? Granted, Uncle SlickG could probably have hired a company to go through his stuff and discard/sell, but I almost think that’s worse. We actually walked away still with a ton of stuff (I hesitate to say crap, because to him it was the most worldly possessions) that is in storage at our house in Danville and Uncle SlickG will someday have to go through as he figures out Paul’s estate. 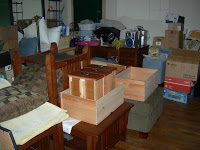 Besides those deep thoughts, this whole experience has pushed J and I a little further along in our will-making process. Not that we’ve run out and made one yet, but it is creeping up on our to-do list. Paul had a will and made Uncle SlickG the executor. Lots of responsibility, but Uncle SlickG is taking his role seriously. Minor problem, though, no one can find the will. Let me put it simply, no will, lots of roadblocks.

But still, here’s to Paulie. The man who loved outdoor adventure and road trips, Civil War and computer books and saving things. Thank you for being so clean and organized. Now if you could just send us a sign where your will may be (I swear, we’ve checked everywhere).

On a lighter note, we spent all of 5 hours in Danville unloading, showering, scarfing down pizza with friends and realizing the house next to us was broken into AGAIN in the past month (but not ours! ADT is built to protect!). Moonshine and his wife Prom Queen drove us to the airport and had us laughing the whole time. Many of you have heard stories of our friend Moonshine. Now we have some more.