We packed up pretty much our whole house to take with us across the country. We even brought Mr. McKinley’s Christmas stocking with a new toy so he wouldn’t feel slighted that we left for the holidaze. The night before we left, the Mister scouted out the toy a little early! 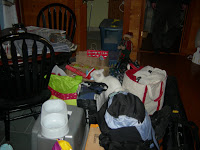 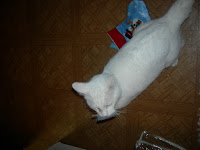 Mr. McKinley loved his road trip, might I add.

Santa visited my parents’ neighborhood on a fire truck, as he has for the last 36 years. When J realized this, all he cared about was how the taxpayers allowed this. People in his town would have a fit! 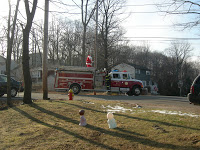 I got to have my girls’ night out with theAccountant and Hallmark4Ever. We had a 3-hour dinner at Jose Tejas and could have actually sat there for another 3 hours. Never enough time together, that’s for sure. I failed to take any pictures of that outing, which is too bad because one of us applied makeup just for the occasion.

The From Good Homes concerts went very well. J went with his boyz on Friday night, then Saturday night, the wives joined. I got there in time for the second set on Saturday evening and I must admit (just don’t tell J), it was a high-energy show!! My favorite part was when we all got up at the end to dance together to the hippie dance. I wish I took pictures of that, instead of when we were all sitting down! 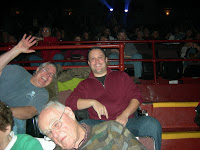 The extra special bonus was that FGH had a VIP, invite-only soundcheck show. Guess who got invited???? They took requests, so of course J was all over this. But then, when they invited him on stage, he got all embarrassed. He just felt very humbled. He doesn’t need any more reasons to love this band, but they sure gave him one. Here’s the video of his request honored. 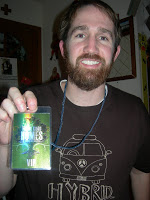 We spent an early Christmas with my ‘rents and then in CT with the niece and nephew, Bones & Curly Locks. We tried to incorporate some regular Christmas traditions. So the kiddos ripped through their gifts in approximately 6.5 minutes just like they would on Christmas morning. We also brought back an old tradition my sister and I have done here and there—paraffin wax! We all waxed our hands and some of us—I won’t say who in particular (cough, J, cough)—waxed our feet. 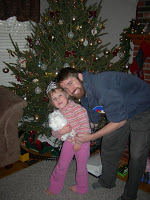 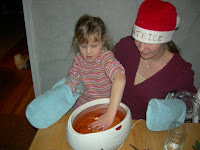 Next up tomorrow … NJ to New Albany, Ohio.