You are here:
Aren’t you lucky? 2 posts in one weekend!!!

My sister (QuickQuestion) traveled 376 miles by train, bus and car to
surprise me for Memorial Day Weekend!!! She, Deal, and my parents were
in cahoots to work out the incredibly complex logistics planning. My
sister is about as directionally challenged as Deal is. In fact, I’m no
sure who is worse. So for her to change trains, buses, etc. to get to me
was a big feat. But it was worth it to me (and I think her)!

Let me tell you about my sister’s visit to our place. It was 90 degrees
the whole weekend. We do not have air conditioning at the lodge. I am
not an entomologist, but I’m pretty sure we have every species of insect
around the lodge. Add to it that sometimes our place can get very
stinky and dirty with all the hikers.

I believe all of this adds up to my sister’s worst nightmare.

But, she was a trooper and we had a great time!

I think I was the most surprised I have ever been. On Friday night, I
was covering the hostel while Deal and our summer intern were both out
on shuttles. Or so I thought Deal was out doing a shuttle. His pickup of
the hiker from the train station was an hour late and I told him, you
better charge more money!!! Little did I know, he was picking up my
sister. Later that evening, I see him drive up and he is waiting at the
front door of the lodge and when I went to let them in, I said something
to Deal and turned to the “hiker” to say “hi” but did a triple take! I
was so confused to see my sister standing there!

On Saturday, the three of us went to the Valley Fest Beer & Wine
Festival. Fun times, despite the heat. Every beer and wine sample was
matched with twice the amount of water to battle the heat. The bonus was
that Carbon Leaf was playing!!! 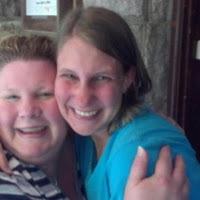 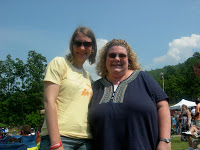 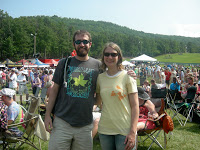 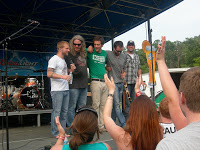 On Sunday, Deal left to meet his sister and uncle at a From Good Homes
concert that took place a bowling alley … in Brooklyn! Neat venue, but
far away, although Deal would probably drive 1000 miles to see FGH in a
rest stop bathroom if he knew they were playing there. 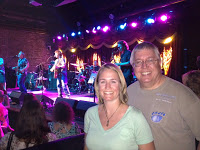 So QuickQuestion & I were on our own for girl time. We spent the evening at the hostel and I told QuickQuestion her job was to be the “meet & greet.” She played the role famously, introducing herself to everyone by her “trail name” Quick Question. It was funny to watch and observe her when she didn’t have a clue what people were talking about and was nodding and agreeing … blue blaze this, white blaze that, slackpacking … there’s a whole jargon for hiking. We had about 15 people staying with us and our fellow SOBO friend Foot-Z stopped by to hand out some trail magic. QuickQuestion got a nice taste of the hostel life, which she describes as “interesting, but SO not for me.”

I cannot be more thankful for my loved ones making these arrangements behind my back. It was a pick-me-up I needed!!

I paid the surprise visit forward because Deal & I came to NJ for 24 hours to see my dad, who got out of the hospital last week after a heart attack and 3 stents … he is up to 11 stents; I believe this is a record. The truth is, Deal was coming for a FGH concert (I do not kid about these things) and I decided to tag along for the ride.