I am not going on a blog hiatus. I promise. Between hosting a wedding at RR and major satellite Internet problemas, I am just going with the plain old excuse of being busy. But I’m back with the latest edition of what we’ve been up to. Get excited now.

Last week (which feels like forever ago), we were able to sneak away from RR for a FULL 24 hours!! So of course we snuck into the woods to breathe in that delicious mountain air and soak up some UV rays. 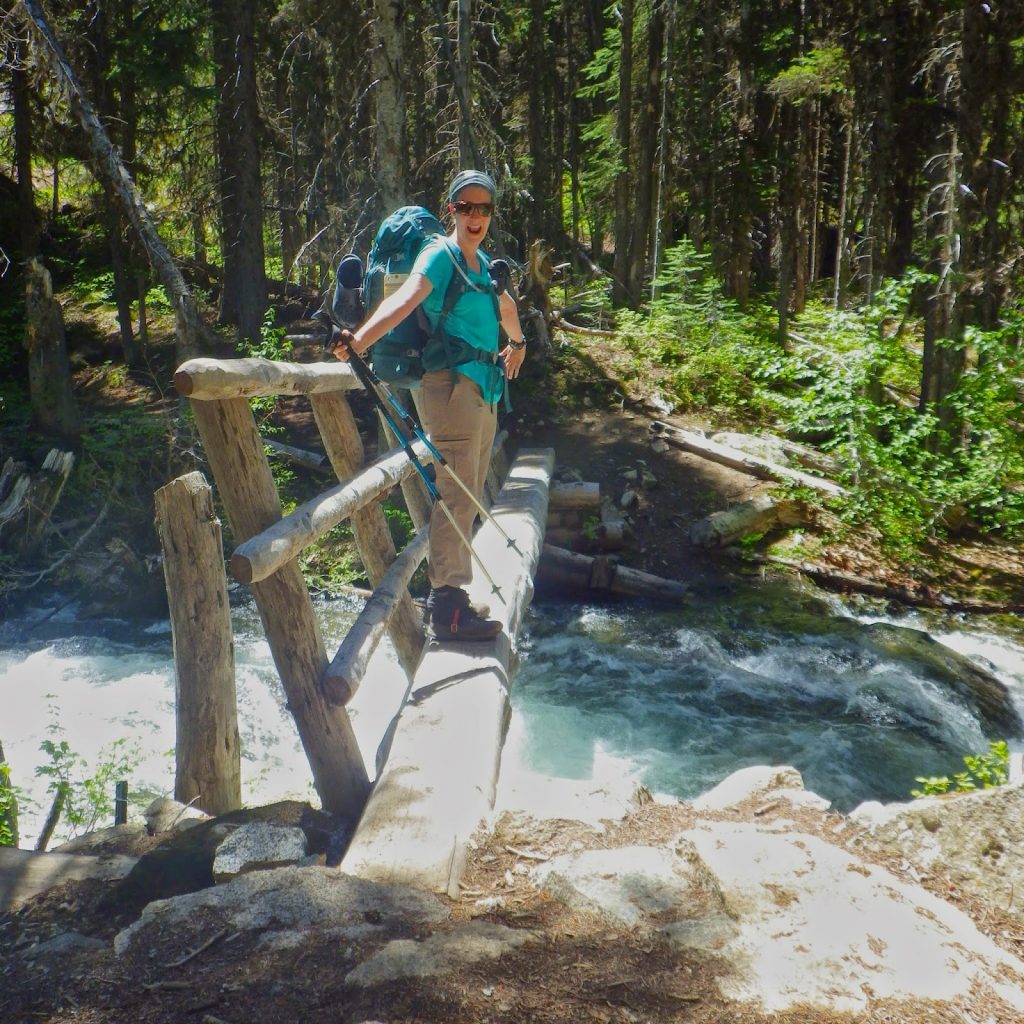 The Wallowa-Whitman National Forest covers a huge chunk of this corner of the state (2.4 million acres!). Up until now, we’ve only explored the lesser known trails within the Wallowas. If anyone from the surrounding big cities are going backpacking in the Wallowas, they are flocking to the Eagle Cap Wilderness section (350,000+ acres of the WWNF), and more specifically, the scenic Lakes Basin. The Eagle Cap Wilderness is aptly nicknamed “Little Switzerland” and “The Alps of Oregon,” depending on how Google feels. 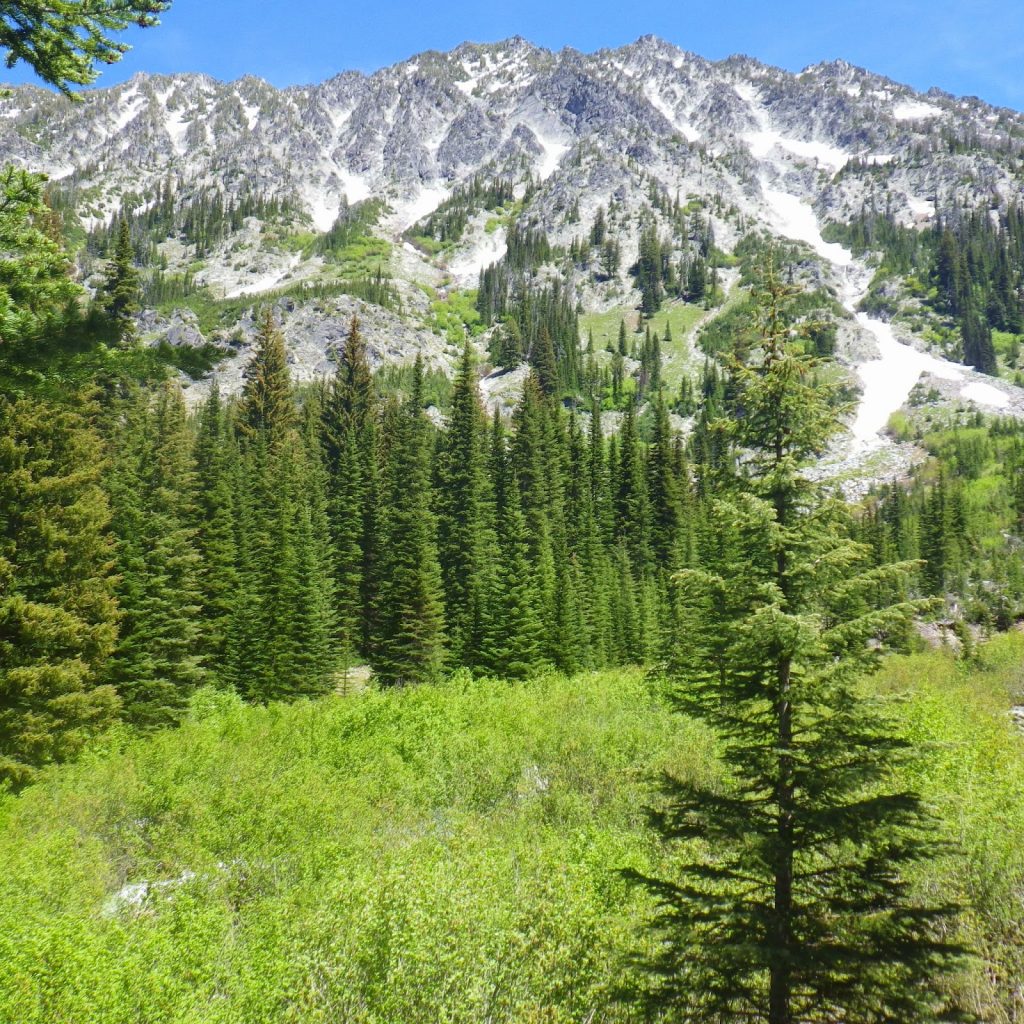 Now, we have been salivating after the Eagle Caps since the day we arrived. Everyone told us they would be snowed in until late July. But, getting enough time away from RR to hit the Eagle Caps is difficult. So when we saw an open window to squeeze in an overnighter, we immediately decided we needed to use that window to hit the Lakes Basin before the crowds start pouring in.

Our intentions were a 20-mile loop to Mirror Lake. When we hit the 2-mile mark and saw the snow pack, we knew our plans could change. 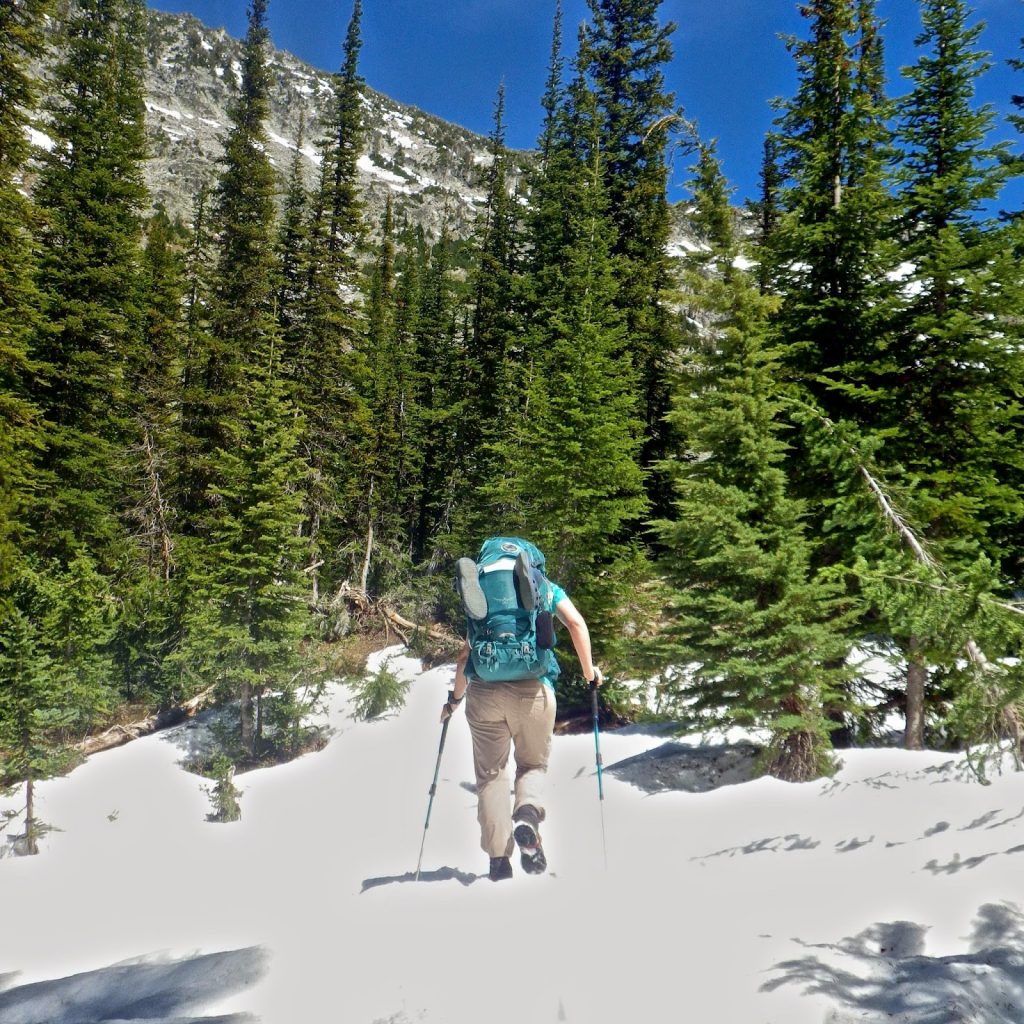 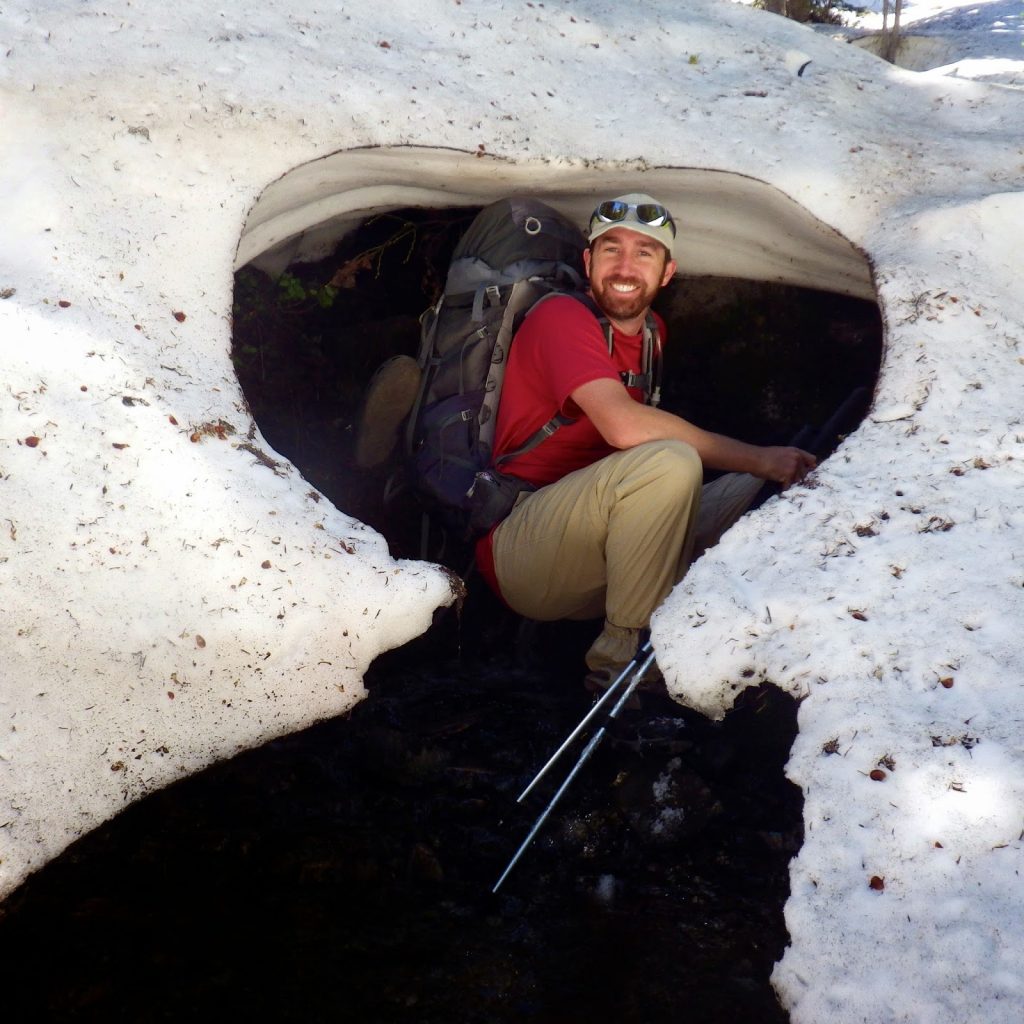 We trudged, I repeat trudged, through the snow. It was a lot of freakin work. Important point to make: we were following the Lostine River, which with all the snowmelt, is raging. In places, the snow is covering every bit of land. Where is the river?? Oh, just anywhere you might be stepping. Postholing is not my favorite thing to do, especially when there is frigid water to be found underneath. 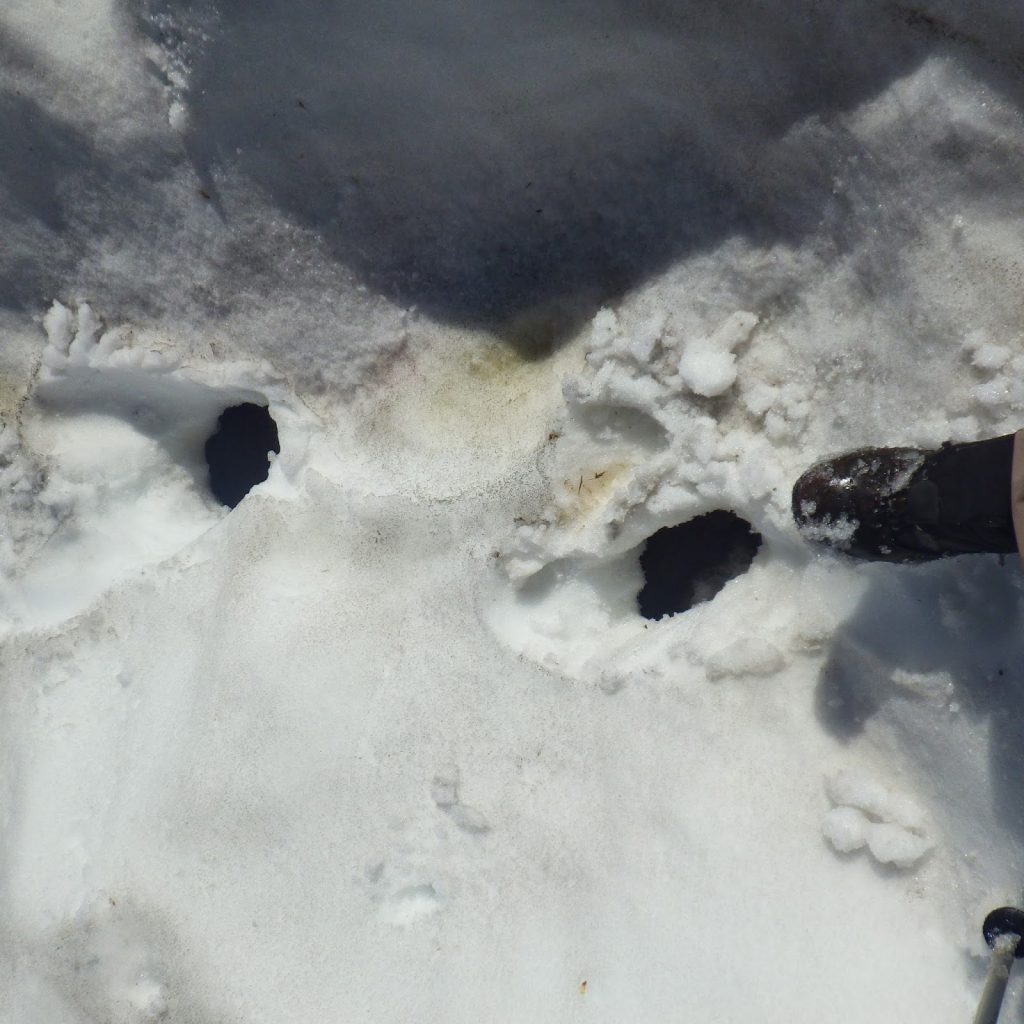 As we’ve learned, plans in the backcountry change as the wind blows. So we made it as far as the snow would let us in the U-shaped glacial valley among the granite peaks and ridges, just shy of 2 miles from Mirror Lake. 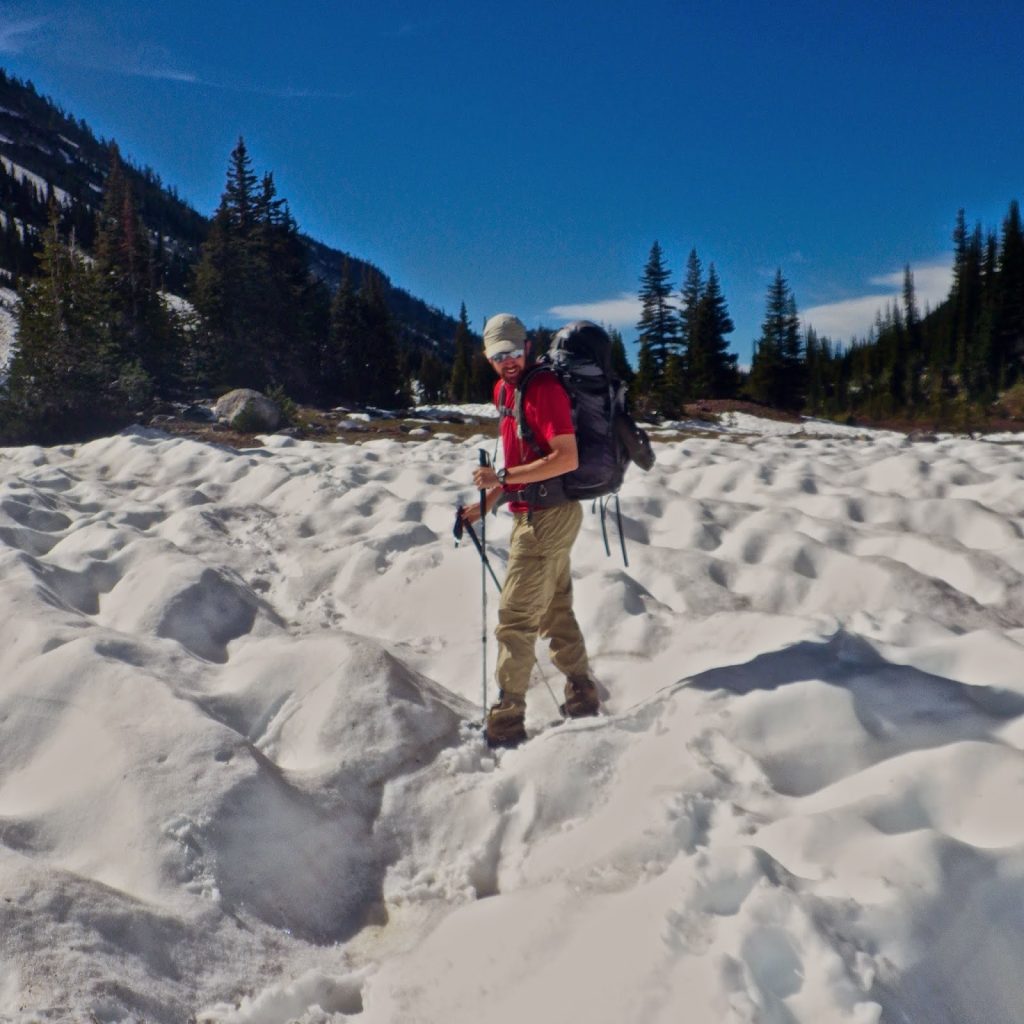 We might have been early enough to beat the crowds, but a little too early for the trails to be cleared, the lakes to be unfrozen and the wildflowers to be in bloom. I’m bummed I didn’t get to see any of the lakes in the Eagle Caps yet, but it is not like the other views disappointed. We set up camp ensuring a perfect view of the 9,572-foot Eagle Cap summit. 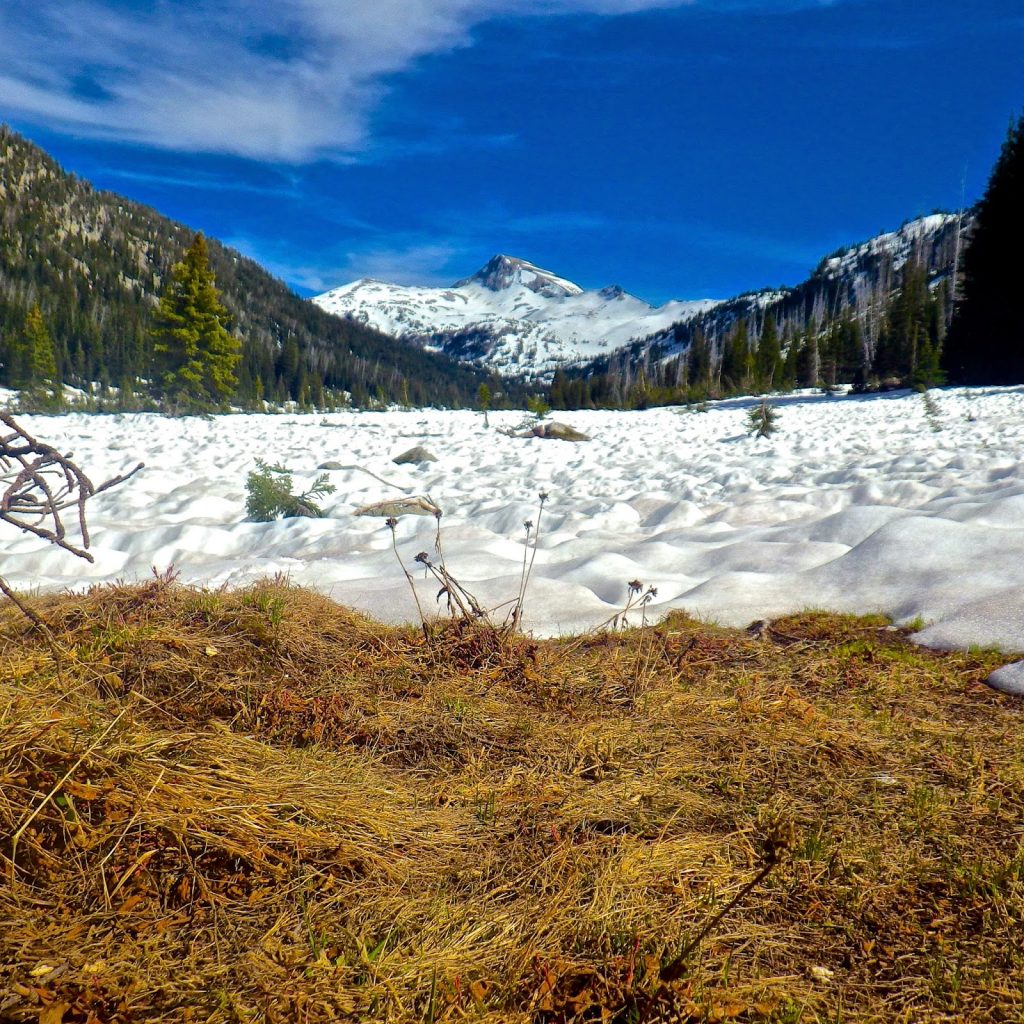 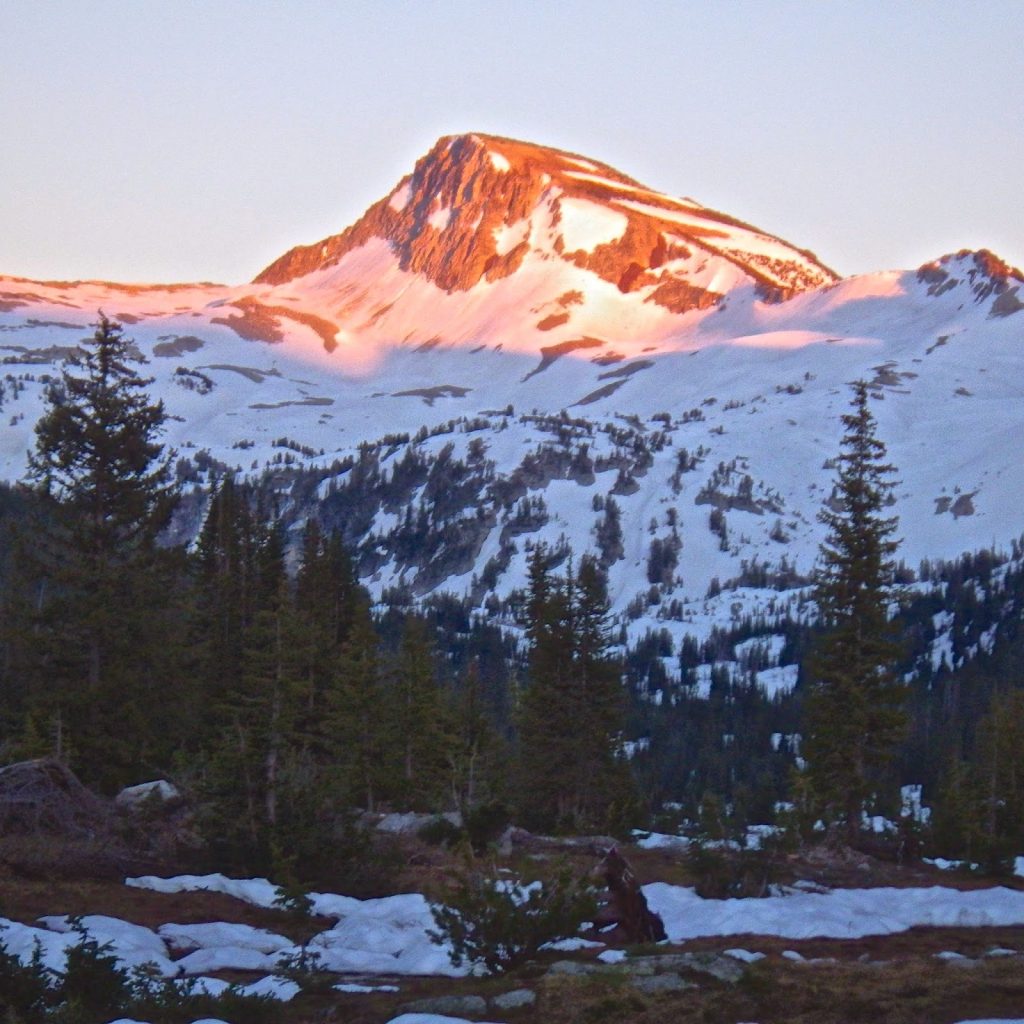 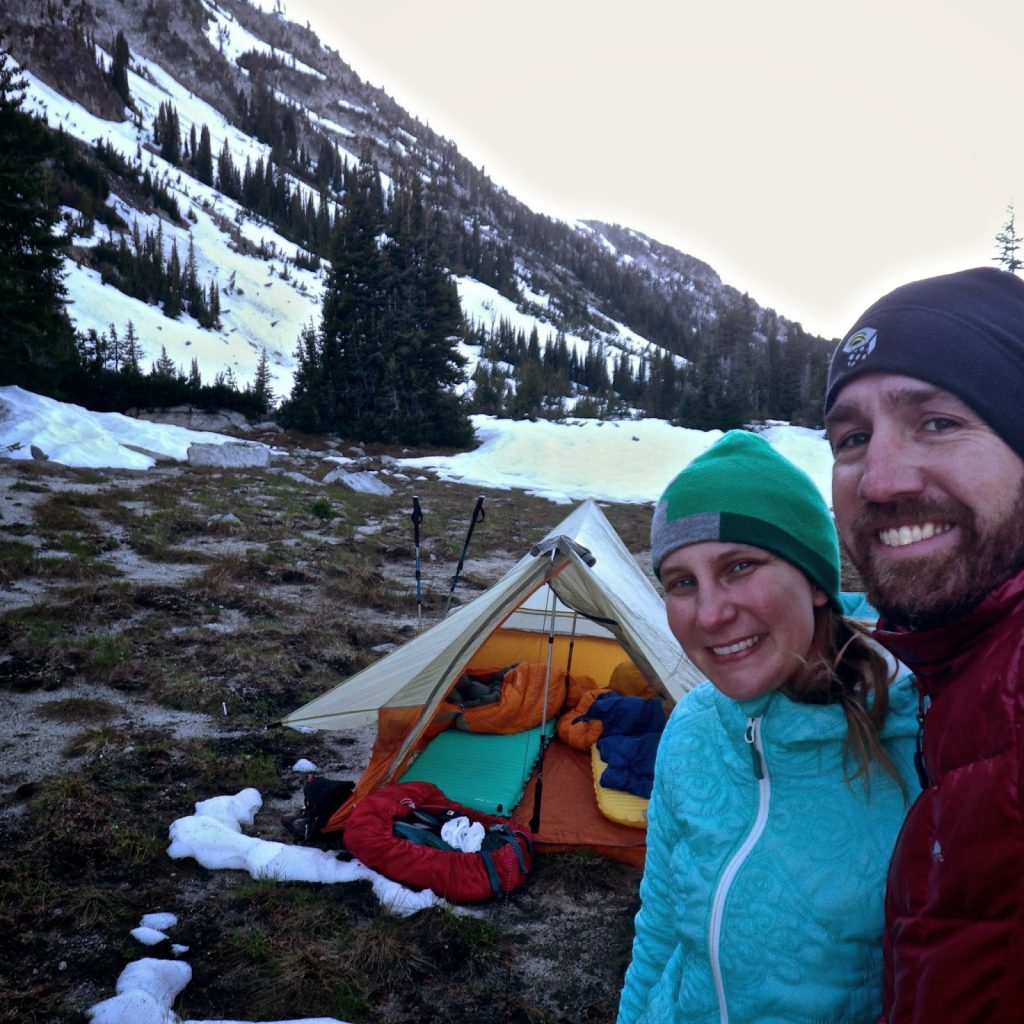 Being an avid backpacker, I feel like there should come a point in my backpacking career where I just shrug off an area with such hype. I get there and think, “eh, overrated.” The esteemed Eagle Cap Wilderness was not that area and we can’t wait to go back. 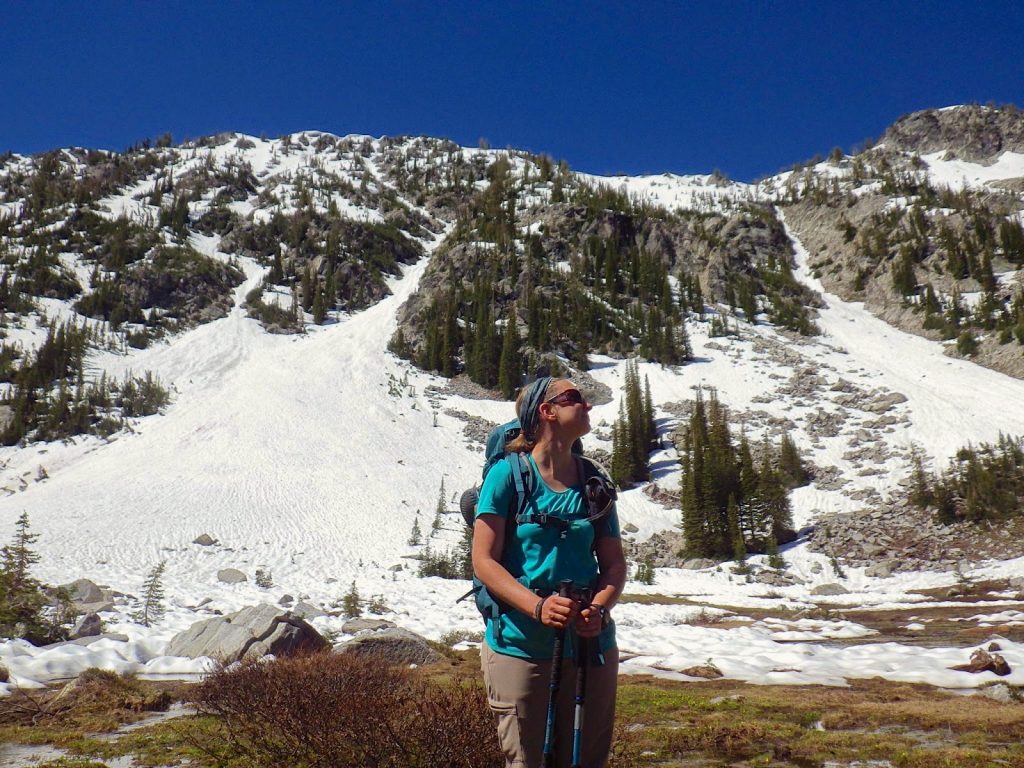 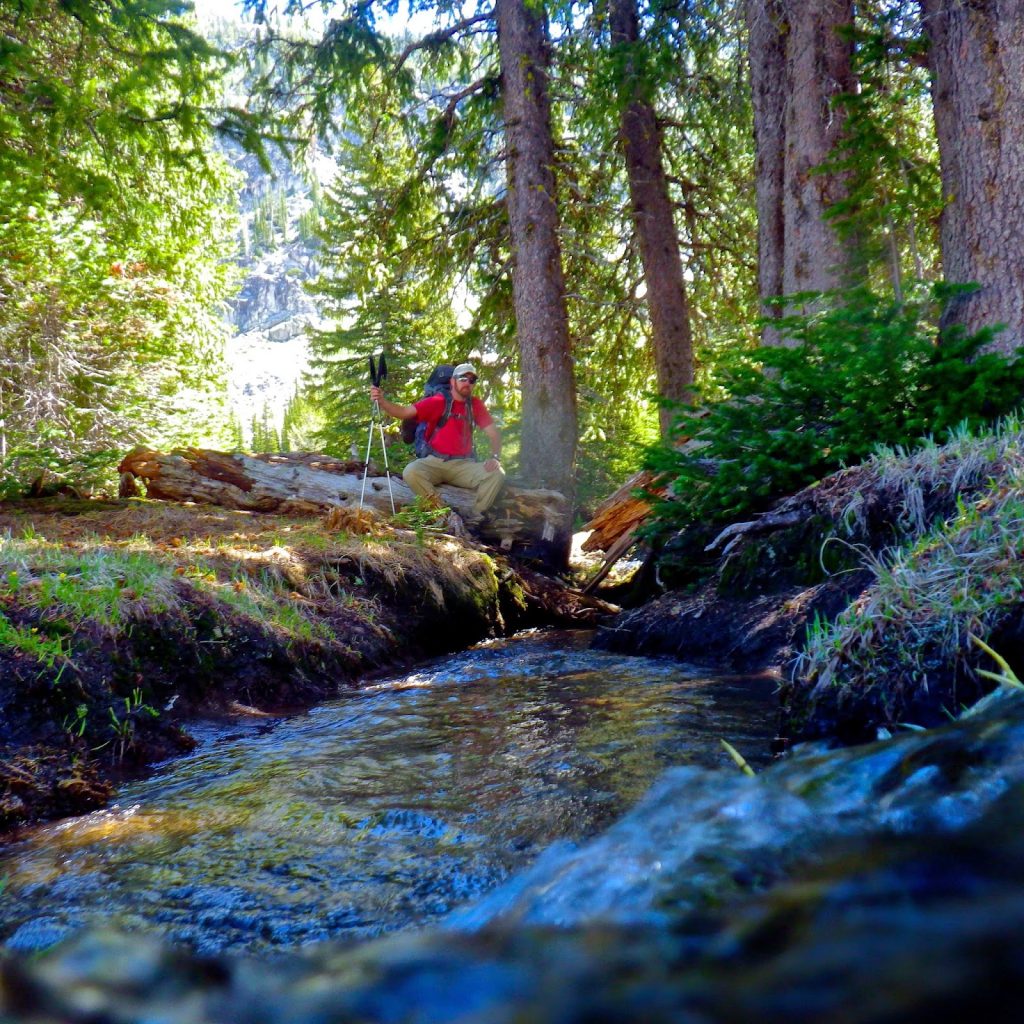 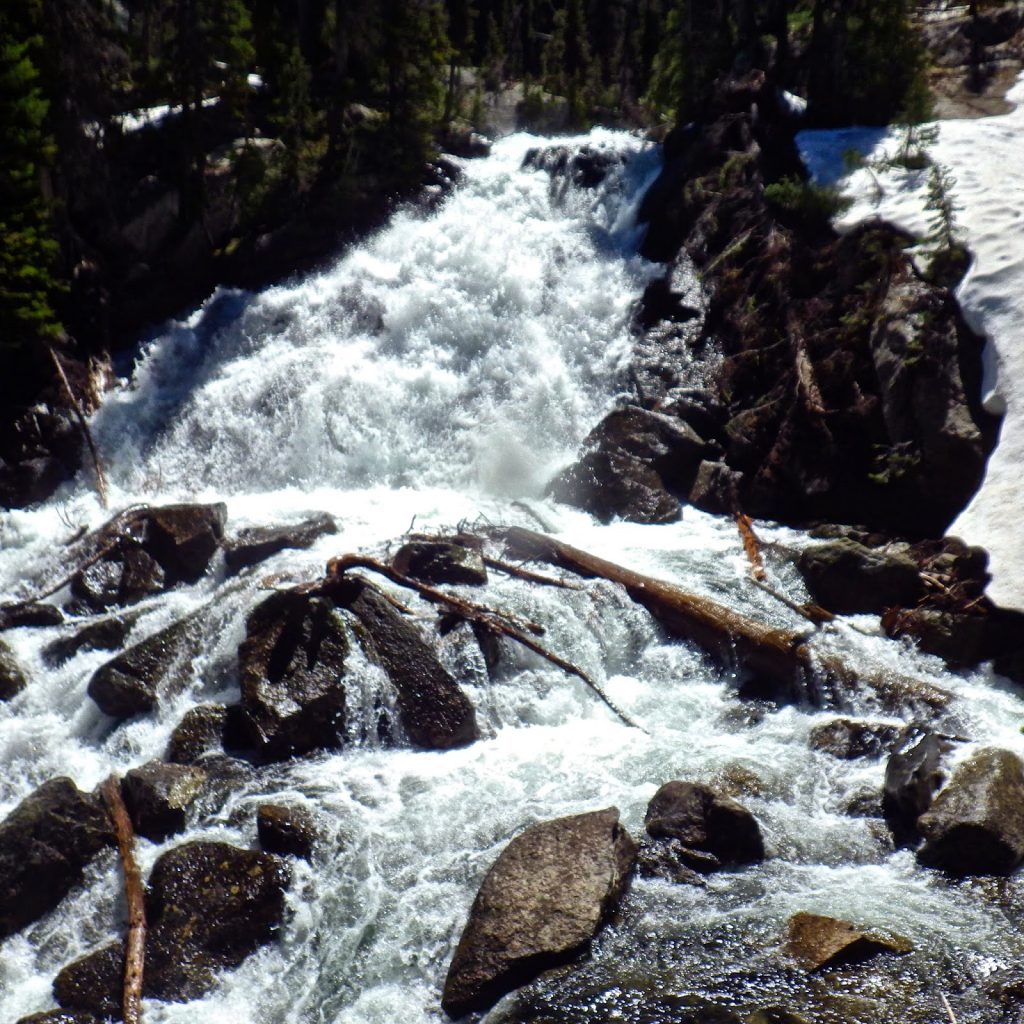