That’s right, J has been taking yoga!!! Believe it or not, nearly 28% of those practicing yoga are males.
I have been trying to get J to take yoga for-evah. His mom got him (and I) a one-month yoga pass at Kindness Yoga in Denver for Christmas. It was an incredible deal … 30 days for $30. For J, it was the deal that reeled him in. “I’m going to go all 30 days and really get your money’s worth!!” Well, we didn’t quite make it all 30 days, but we started going Dec. 28 and practiced 14 days!! This is how J & I operate. We get really into some kind of fitness routine for a period of time (i.e., thru hiking, Insanity), then switch gears. Yoga was most of January. Snowshoeing and cross-country skiing have taken over, but yoga will now be part of our irregular routines.
My point is, I am so glad J finally jumped on the “om” bandwagon. Having yoga as part of J’s Denali training will help him to have full range of motion while up on the mountain. He can even do some of these poses in his tent.
I have been practicing yoga sporadically (like a few dozen times a year) since 2013. Without a permanent home, I can’t really get into a yoga routine. My most consistent spurts included one month of yoga with my friend Donna at North Jersey Health & Fitness in NJ, one month of yoga with my friend Tammy at Hot Asana in Danville and one month of yoga with J and his mom at Kindness here in Colorado.
The first time I ever tried yoga was while I was living in Arizona in 2002. I fell asleep 3 times, but had a sudden craving for world peace following class. I didn’t return until 2013.
I’m not awesome at it and I still fall asleep sometimes. I don’t know half the poses and sometimes I get very confused during class by the language. But overall I find when I go consistently, it definitely improves my balance, flexibility and mentality.
I thought yoga would be the one area I could “beat” J. For the record, he is good at everything. He’s the type of athlete that can run a race with no training. I hate people like him. So it should be no surprise that he holds his ground in yoga (pun definitely intended). As the picture shows, he can even do the crow pose. Meanwhile, my favorite pose is savasana, better known as corpse.

Funny story about J’s brand-new yoga mat (Christmas present from his mom). On the way to the cabin, the winds were so strong, they blew open our rooftop cargo box. J’s mat blew out into the road and was run over a few times. I played Frogger between traffic to pick it back up. It took quite a beating, but is still usable!! 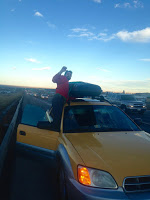 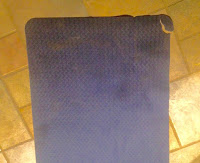