The Cat Lady Who Lives In The Woods And Writes

I have officially fallen into a stereotype.

I am the woman who lives in the woods by herself with three female cats and writes all day. 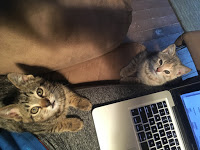 To be honest, that might be a dream come true?

Lemme back this bus up and say Justin is doing a-okay (and I still hope to someday tell his story when it is completely over and less raw). It’s just that he is still recovering and has to be near this thing called civilization, therefore he is in Denver. Living here in New Mexico at Fenton Ranch means the closest town with full services is at least 1 hour and 45 minutes away.

So I am flying this property caretaking role at Fenton solo and making very good use of my time working on my book. The cabin is a perfect location with its wood-burning stove and delightful scenery.

Just as a reminder of the backstory, when we returned to Fenton Ranch in August, there was a new cat roaming the property (there always seems to be feral cats coming and going). But she was different than the others. It only took her minutes to warm up to us. She seemed like she was starving, so some of the parents, teachers and us started to feed her leftover taco meat and ham, until we purchased cat food. One of the parents also mentioned she seemed like she had just given birth. But we scoured the property and never found any kittens. So we named her Mrs. Gibbles and continued to feed her (cat food) outside our door. She seemed to stay away more than hang out, although she would show up occasionally during our outdoor lessons with the kids (which they loved).

Right around the time the program was wrapping up, Justin and I were doing some outdoor work on the weekend while the kids were off the property. Mrs. Gibbles comes over to us with a baby kitten in her mouth! Then a second! We introduced ourselves and they were rightfully skittish. We were about to leave for a few days, but we bonded as best we could. Plus, we didn’t know how they would fare leaving them to live outside (we have bobcats, owls and many other creatures of prey around).

We returned and Mrs. Gibbles brought the kittens to our door almost immediately! We let them inside (suckers), immediately litter trained them and marveled at their cuteness. We named the grey one Jasper and the tiger print one BJ (after the previous caretaker who lived here for 25 years until her death; it is possible she’s been reincarnated given she was an animal lover).

Then we had to leave again for a bit, so everybody had to go back outside and fend for themselves. We set them up with a nice bed and food in the toolshed, but knew Gibbles tends to move them around in hiding (part of her survival strategy, I am presuming).

I returned and low and behold, Gibs brought the kittens back within minutes.

And this is how the nomads ended up with 3 cats! Not sure where these cats will go when we eventually leave Fenton, but I’m not thinking that far ahead (although, I am trying to convince Justin that they would make good van cats). For now, I am welcoming the company. 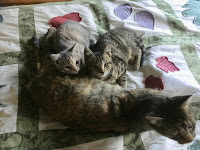 That doesn’t change the fact that these cats are crazy.

These kittens play freakin hard. And get into EVERYTHING. No tissue untouched. No backpack strap unmoved. No wire unbitten. Good gracious, I spend almost just as much time with eyes on them as I do with eyes on my book via the computer screen.

And, the mama is not without her annoyances. Though they now spend most of their time inside our cabin, Gibs still feels the need to go on a mouse hunt and bring back her prize. I am sure she thinks she still needs to provide, and I’m not trying to take that away from her, but heavens to Mrugatroyd. Four was the count for the other day. She will stand at the front door with a mouse in her mouth crying. Her babies will stand on the other side of the door crying in symphony. Everyone is looking at me to reunite them and let them feast, but there is just something disturbing about watching a cat chomping on a mouse, then coming to snuggle in my bed. I heard she may calm after she is spayed, so we shall find out after I take her for the surgery Saturday (two hours away, mind you).

So that is a day in the life of a cat lady who lives in the woods and writes. These 3 may have found us and needed us to save them, but in truth, they saved me just as much. 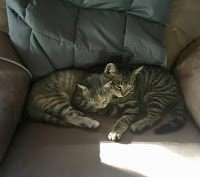