What do all these things have in common? Well, they all represent Vermont!!!

J and I took a 3-day trip to the Burlington area and of course, made the most of it. Here are highlights in no particular order:

Ethan Allen’s homestead – If you are like me, you might think Ethan Allen was (and still is) a famous furniture maker. But, um, he isn’t at all. Here’s a little history for ya! He was a Revolutionary War hero who was basically the reason Vermont became a state. You see, New Hampshire owned all of Vermont’s land back in the 1770s and New York was trying to claim some it. So Ethan Allen instituted the “Green Mountain Boys” and fought to make Vermont a state of its own!

Lake Champlain – the plan was to kayak on the lake one of the days we were there. BUT, the remnants of Ike curtailed those plans as the lake turned into an ocean and kayaking was just not a safe option.

Ben & Jerry’s – You can’t go to Vermont without visiting the original site where the infamous hippies, Ben & Jerry, sold their ice cream in the 1960s (the gas station is no longer standing). We toured the original manufacturing site and sampled some of the delicious cream of ice. Very cool (no pun intended) and informative.

Mayor – We met the mayor of Burlington. Okay, he really isn’t the mayor, but this is SILAdventure’s buddy from college and he could be the mayor. That guy knows everyone and everything in Bton. He is by far one of the most interesting people I’ve met with his stories and crazy innovative ideas.

Beer – Burlington has 5 different breweries (um, there are only about 40,000 people in town). We pub crawled to 4 of them and J drank probably 13+ beers as a result. I’m sure he found a favorite beer, but does he remember? I don’t think so. 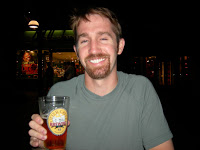 Mt. Mansfield – Staying true to our goal of hiking the highest peak in each state, we hit our 5th one. It’s just about at 4,400’, so we didn’t have to negotiate weather too much, although apparently the summit is generally without a view because of Vermont’s fog. The hike was a bit more crowded than we like (with lots of people from up North … Hey!), but the trail was nice in that it kicked our butts. When we were hiking the ridge above treeline, we even encountered a porcupine!!!! Man, those spikes are ginormous!!! 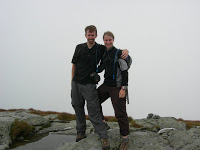 Camping – We ended up camping IN the city of Burlington. Usually we like to be out in the wilderness, but we wanted to be accessible to the city for the nightlife. Well, the campground turned out to be really awesome. And we didn’t even know we were surrounded by civilization. The nights were adventurous—we got hit with torrential downpours and crazy winds. J even said at one point he thought we should go sleep in the car in case a tree fell on us … we hoped for the best and did just fine.

Church Street – Burlington has an incredible pedestrian walkway and there seemed to ALWAYS be something going on. For example, while we were waiting to go to 80s night at one of the bars, we got to watch Sex and the City (again) on a big screen outside!!! J was so elated. In fact it may have been his favorite part of the whole trip.

PS – I still have yet to see a moose in the New England area.