J & I spent Saturday exploring Mt. Greylock State Reservation in Mass, which happens to be the location of the highest point in Massachusetts. You can drive up to the top got $2, or you can be cool like us and hike (and save $2). Bagged and tagged that peak. I was pleasantly surprised with the area and hiking. I had low expectations since it’s not a very high peak, but it was very pretty. 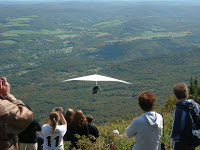 Check out this guy hang gliding!! J plans to do this next month. It actually makes me queasy to think about!!

Now here’s the part that may land me a spot in hell. Hundreds of museums across the country participated in “free museum day” on Saturday. When I looked it up, I saw that the Norman Rockwell Museum was on that list and just happened to be near where we would be hiking. Not to mention I’ve been obsessed with his pictures since my teenage years. 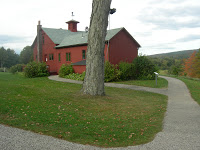 So we mosey on up to the museum after our hiking and J walks right through, like he was Norman’s son. I, on the other hand, get stopped by someone asking for my ticket. Not to worry, it was free day after all. Yeah, they had no idea what I was talking about. I ran back to the car to get my the info I printed out to prove them wrong (I realize now that I actually did not have the right thing printed out, so they would have denied me entrance anyways). When I came back in, the admission people were busy and J was all, “you’re missing the tour, come on!!!” I had 2 choices. I could go explain the free day thing to the admission people. Or I could enjoy the tour. Guess what I chose?

For most of the tour, I was sweating bullets. Eyes darting away from the guards. When we were in this one room, the guard got some sort of call and I thought it was about me …

So whatever. I broke into the Norman Rockwell Museum. My argument is, it was free museum day, we arrived at 4 and the museum closed at 5 and the admission is $15! What would you do? Even my mom told me I made the right choice. According to J, he technically did not break in because no one even stopped him in the first place, so he didn’t know any better … Not so sure how that flies with the Big Guy Upstairs.

After breaking the law, we headed toward home looking for a place to eat. We stumbled a neat hippie town outside of Springfield, Mass. J had flashbacks and realized he was there for a concert some 15 years ago. This happens often. We’ll be driving and J suddenly remembers being there. Anyways, we chose Northampton Brewery to eat, which was literally tucked away. But this is a familiar pastime for us. J samples new beers and I watch every time we are on a road trip. There was actually a beer at this place that I liked! Imagine that. Ended up being a really cool pitstop though with a great outdoor beer garden for eating and wicked good food. Next time you’re in Mass, stop there. 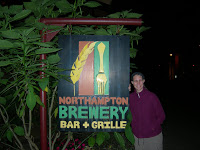 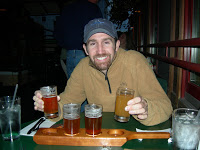 Some strange things we saw on our road trip. Yellow road signs that read “children.” I understand “Blind Person” or “Deaf Person,” but show me a neighborhood that doesn’t have at least one child? Strange. Then we passed the World War II Club, which was happening on a Saturday evening. Apparently 80- to 90-year-olds party hard.