J and I took a nice 18-mile bike ride Sunday. J had an event on Saturday, so we (since I AM volunteer of the year) were tied up the entire day. It worked out perfectly because it rained all.day.long and the event was indoors. If we were at home, we would just sat and stared at each other anyways.

But Sunday, there was sunshine! We debated taking the kayaks for one last spin, but it was just easier to hop on our bikes. So we biked through the country roads of Penacook, Concord, Warner, Webster and Boscawen. It sounds like a lot, but don’t forget, we live in small town America. The exact route was River Rd to Bog to Horsehill to Blackwater to Deer Meadow to Corn Hill to High to King to Queen. I have a slight obsession with street names. I’m probably the only one who thinks so much about the names. It just tickles my fancy. 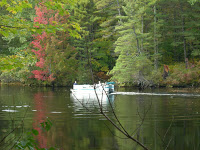 Back on River Rd. Lots of boats out today! 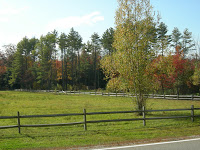 So anyways, of course it was beautiful and colorful. They say we are at 60-85% at peak for fall foliage. Most of the roads were really quiet. We even discovered a nice pond close to our house (7.8 miles to be exact) where we can take virgin kayakers for a spin. 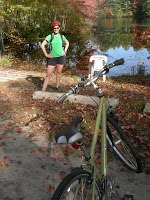 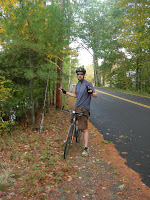 On a side note, I’ve mentioned before how lucky J is before. Well, Saturday his luck was strong. He won a two different raffles! One at his town event and another at Margarita’s, where we went that night to have an early celebration for his bday.
Categories: Blog Post, PostsBy plavigneOctober 5, 2009Leave a comment
Tags: Outdoor Recreation