Coincidence, or all part of the master plan?

You are here:
So for the second year in a row, one of J’s friends had a baby on his birthday. That’s right, folks, 2009 produced another protégé. Last year, it was theBuddha’s child. This year, it is PanicMan and theMakeupArtist’s little girl. 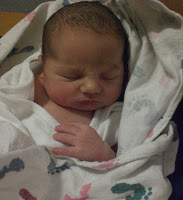 Next year, we are betting on either theHoss or SILmeow. Takers? Not to mention, theCoach’s first born shares our anniversary (Oct. 28). We are just popular people, what can I say? And I hate to state the obvious, but October is a popular birth month because it means the baby-making took place around Valentine’s Day. You know, cold winter months when love is in the bedroom. So whip out your satin sheets, turn on Barry Manilow and start practicing! Gotta keep up the trend!!