What a Long Strange trip it was……..

Try to contain your excitement. Here is J’s guest blog entry about his trip out West (without me) a few weeks ago. I am still NOT happy about all the touring he did to places I’ve never been. I thought we became one when we married??? Anyways, enjoy!

Late is better than never…. So every year I go to the National Parks and Rec Conference. It is a great event attended by over 10,000 people from every state. We do not play wiffle ball and drink beer as my wife thinks. We actually do attend educational seminars, visit with vendors and attend social gatherings. Okay, sometimes we will play tennis, drink A beer and well, we always seem to find the local dueling piano bar.

This year the conference was in Salt Lake City. I have been to SLC before and while it is in the beautiful state of Utah, the city is not like visiting the scenic National Parks Bryce, Zion and Canyonlands. Though very scenic and surrounded by mountains, you need to venture out of the city to places like Park City or Ogden. I knew I was not going to get this opportunity because of all the “learning” I was going to be partaking in.

So I decided to fly out west early to my sister’s in Denver (SILAdventure). We had a plan…..

We were not going to chill in Denver, but hit the road taking the long way to SLC.

We left early in the morning for the 7-hour dive to Jackson Hole, Wyoming. Well, we woke to about 2 inches of snow in Denver. As we were driving, the snow got worse and the highway department thought it was a good idea to close the highway at the 80/25 intersection in Cheyenne WY. The plows I guess could not handle the snow. No worries, we found our way around this detour and ventured into Jackson around 7pm. My sis had a friend in Jackson so we met up with her and her boyfriend for some dinner at a local brewery (yes, I stole a glass to add to our exploding collection). Her friends had a great place tucked away in the woods, where we stayed for the night. We woke around 8am to a nice coat of snow on the ground and opened the curtains to the deck to see some elk just chillin’ in the yard. 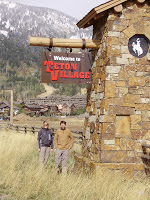 That day, we headed to Grand Teton NP. We packed up our gear, got our boots and gators, and did a nice 5-6 mile hike through some snow, most of the time breaking our own trail. We hiked up a small mountain and while in a valley we looked up and saw over 40 elk grazing along the ridge, some of them had huge racks (on their heads). After a great day of seeing elk, moose, snow and the Tetons we headed into the town of Jackson to get some dinner and have some drinks. We hit the hay early so we would be well rested for our next adventure to Yellowstone NP. 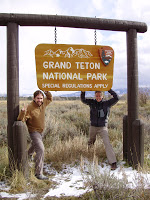 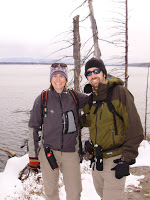 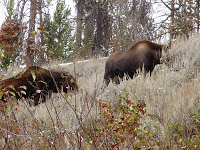 We woke early and got the road report. The road we wanted to take from the south entrance was closed, so we headed over Teton pass into Idaho to the west entrance. We spent all day and into the night exploring every nook and cranny of Yellowstone. We drove just about every road that was open—one was closed for construction and two were closed for snow. We stopped at all the hot springs, geysers, and even for the hundreds of bison and elk we saw. We did go to Old Faithful and it was, well, touristy. I must say that we did hit the park at a good time of year. There weren’t that many tourists and the bison did outnumber them. At Old Faithful, there must have only been about 200 people there. You could tell that there was room for a lot more, I would say over 1000. Old Faithful was set up as an amphitheater with room for just about everyone and their mother to stare at spouting water.

We got out of that area as quick as we could and headed north where we saw just about no one. We did see some elk in the road and the spot of a lifetime happened. WOLF!!!!! This was just the second time I saw a wolf, I had one come up to my car walk by me and look at me while living in Denali. My sis never saw one so we watched as the wolf scurried around a field chasing some ground squirrels. We pushed on past Mammoth Hot Springs and the large hotel. The place was empty (shut down for the season). We were there with about 200 elk as they tried to cross the road and took their sweet time holding us up, damn nature!!!

We were planning to tent camp at Mammoth but the below freezing temperature and snow on the ground made us think twice. So we headed north to Bozeman, Montana. We found nice brewery (yes, I stole a glass) and then found the only hostel in town. Hadn’t been in a hostel since Scotland (10+ years ago) but this was nice and cheap.

The next day was the big push to SLC. We headed down some obscure roads past Big Sky Ski Resort and into Idaho. Then south until we hit the great state of Utah into SLC.

We checked into the hotel and then found my colleagues who traveled from New England for the conference. We hit the town for dinner, drinks and told the stories of our 1500-mile adventure.

Oh, did I mention the conference was great too!!!!