To the Cuse we went

You are here:
In keeping with J’s motto—will travel anywhere for a concert—J and I continued from Mohegan Sun to Syracuse, NY, for a Phish show. Cause, you know, we were already on the road. And the stupid Phish lottery he entered gave him front row tickets in an arena of 7,000 people where they haven’t played since 1994 and “that’s a chance in a lifetime!” (According to J). Anyways, I’m just glad he didn’t get tickets for the show in Detroit or something. I could handle Syracuse especially since we have a friend there!!!

So to the north we drove. And boy is Syracuse north. Did you ever notice when you’re way up north in NY or Canada, all the squirrels have black fur? It’s so strange. But I digress (Beef).

DancingandPrancing is a cronie from Danville who moved up to the Cuse to get her master’s in forest management, or some variation of that. She and her boyfriend (a PhD student in forestry or some variation) did a great job of showing us around (it was my first time in the Cuse). So while J went off to the show, DancingandPrancing and I did all sorts of catching up—talking about everything from global warming to the best deals on SteepandCheap.com. 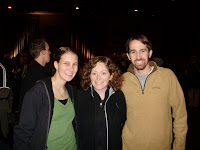 Us with DancingandPrancing at Phish pre-party 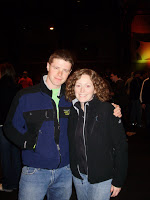 After all that, J said it was not the best Phish show he went to. In his words, “good energy, good venue, good show.” Hey buddy, next time we drive 5 hours for a concert, you better use stronger adjectives than that! 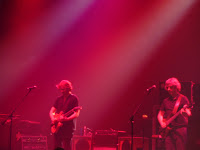 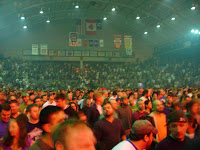