Thawing out in Florida

Shiver me buccaneers, J & I had a weekend full of pirates and cannons in Tampa. I’m not sure why anyone would want to play around with pirates or the idea of pirating, but everyone in Tampa does. At least once a year they do.

This weekend was the annual Gasparilla Invasion, or re-enacting an invasion of pirates (led by Jose Gaspar) into the city. I can’t say that my explanation (or the pictures) will do the event justice, but I can say it is extremely entertaining. I really didn’t know what to expect of the festival. I just wanted to visit Beef and get some vitamin D in Florida. Instead, we got all that and a bag of beads (I’ll get to that later).

Essentially, Gaspirilla is just a reason for the entire city to party. They try to make it a little like Mardi Gras, but Mardi Gras on steroids. Of course I’ve never been to Mardi Gras, so ignore what I just said. But, there are beads involved. And costumes. The whole point of the day is to gather as many beads as possible, all while drinking a few adult beverages. The beads are thrown to us from boats. The people on land throw water balloons as a thank you for the beads. Then, a parade starts on the street. And the people on the floats throw more beads (and sometimes, you get hit in the face and your tooth falls out. True story, it happened to someone). Did I mention the floats are put together by krewes? Adult fraternities/soriorities. Who knew they existed? Only in Florida though.

All in all, Beef’s mateys are quite colorful so we were surrounded by good people all weekend. He lives in a small apartment complex within walking distance of bars. The ideal lifestyle for a bachelor! He has a million friends (no exaggeration) and his circle of friends could really make for a good late-night, R-rated sitcom.

And well, that’s the story of Gaspirilla. ARRRRGH! Now for the pictures. 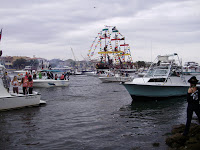 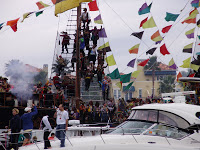 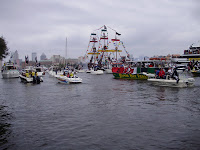 Look how many boats were out there. I could never drive a boat in this traffic. 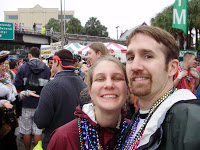 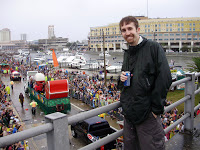 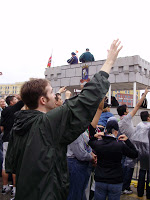 J praising the Lord. Or trying to collect beads. You decide. 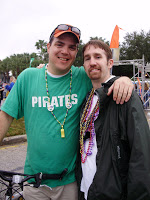 On a side note, I discovered two new foods in Florida. Boiled peanuts. Ever have? Apparently they serve them in gas stations down there. Boiled peanuts changed my life. By adding protein.

The second food is a Scotch egg. You see, Beef’s apartment complex does a whole breakfast potluck the morning of Gaspirilla. To fatten the belly before the drinking begins (for some people, the drinking begins even before that). Anyways, someone brought a batch of Scotch eggs. It was a little intimidating at first, but definitely yummy in the tummy.