The drive across the ENTIRE state of Nebraska on Wednesday was about as exciting as the drive across OH, IN, IL & IA. Except that the speed limit was 75 MPH. Thank you Nebraska. 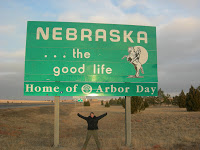 NE is just as Willa Cather described it in “My Antonia.” It is “stripped bare and grey as sheet iron … “

There was no snow in NE, which is hard to believe since they got hammered with snow about 2 weeks ago and Route 80 was closed because of this!

We saw tons of black angus cows, which only made us want a steak. I also spotted my first buffalo! They were at a great distance, which is good, but it was still pretty cool. They are native to the prairie land, so I was hoping we would “run into one” (not literally though). It made us realize we wanted buffalo instead of steak for dinner.

There were tumbleweeds rolling across the road.

We drove under the Great Platte Archway, the structure over the highway that commemorates the old wagon trail of westward migration. I felt slightly bad for the early settler pioneers who traveled by wagon. While our trip across the midwest only took 2 days or so, theirs probably took months.

We stopped in York, NE. J went to school in York, PA. It is still up in the air which town is more depressing. 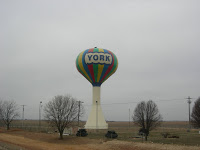 Then there’s Sidney, NE, the headquarters of Cabela’s. I suppose that would excite some people.

We drove clear across the state of NE. To its panhandle. We had a purpose. The highest point is located in the southwest corner of NE. Actually, right on the border of NE, WY and CO. At 5,424 feet, it could sound intimidating. But, it’s merely a bump on rolling farmland (although, I have to admit, it was more windy at the high point than anywhere else). As usual, our quest to “hike” the highest peak was more of an exercise in location finding than a “hike.” But, we bagged it, our 13th highpoint. 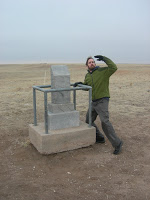 Here it is. The highest point in NE. 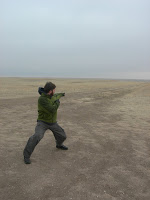 These are the roads we had to follow to get to the high point. Very interesting. And it took us a good hour to navigate them.

There were lots of cowpiles around. We drove over one and it nearly popped our tire! 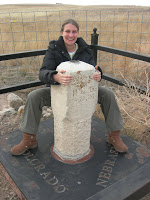 I know it looks like I am taking a big poop, but I’m really just trying to be in all three states at once.

After finishing our “bizness” in NE, we head into Cheyenne, WY, for dinner.

Wyoming is my 45th state! We stayed in the lower southeast corner this time, but I can’t wait to come back and explore the rest of the state. 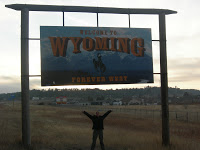 Cheyenne is a cute western town and J seriously contemplated buying a pair of cowboy boots. Who thinks he can pull them off? 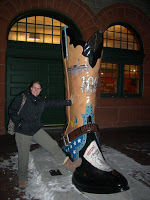 In Cheyenne, we ate buffalo. Then, we spent time at the Sierra Trading Post superstore. It’s no REI, but it’s a close second.

We got into SILAdventure’s in Denver late Wednesday evening. Stay tuned for Part V … the best part of the trip!!!