Where in the world are Steadee & Deal??? That’s a good question. For the last two days, we’ve been in one place–my parents’ house in NJ. A record for us. We are actually staying here for the next 7 days. It’s a very good thing. We needed to catch our breath. Plus, we reunited with Mr. McKinley!!! You can tell he is pissed, but I think he is slowly forgiving us. Little does he know we will be leaving him again …

Let’s start with last weekend. We attended a wedding for Deal’s cousin in Charlottesville, a very cute town surrounding the University of Virginia. Here’s the very handsome couple:

The wedding was a lot of fun and at a winery. Doesn’t that sound dangerous? Well, it was for me. Not because of the wine, but because they featured a special “Mistletoe Martini” that tasted like candy. I like candy. A lot. The next morning, I decided that I probably shouldn’t have liked candy that much. But still, a fun night.

It is always great times to hang out with Deal’s family, especially because his siblings and “others” are very close in age. We have an ongoing joke though. The siblings have similar planning methods, in that they do not plan. They also have similar communications methods, in that they do not communicate clearly. The “others” are the opposite. We usually let the siblings talk things out and laugh in the background. Then we make the plans and communicate them.

From C-ville and the wedding, Deal and I spent the night with DrFlyer/Pat, Deal’s friend from the Prep, and his wife, theDancer/Bri. We discovered a new board game, Bang! and stayed up way too late playing it. In the morning, they trusted us to babysit and we hung out with their very smiley baby. 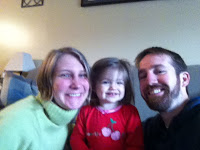 Our next stop was to visit Fire Marshall/Mac, our fellow AT SOBO thru hiker, and his family (also known as, our second family). Of course they were as hospitable as usual, cooking up a delicious storm and making us feel at home. And reuniting with Fire Marshall brought back the best trail memories.

In between all our visits, we had some more job interviews, but I’m still not revealing details yet. We are 99% sure, though, that we are going to take another epic road trip following Christmas being that we are still jobless and homeless. This time straight out west to Colorado! Deal’s sister lives there, along with some other friends, so why not? “Why not” seems to be our philosophy lately!!!