We have THOROUGHLY enjoyed our days off in Wellington, then Picton. It had been the perfect mix of chores (resupply, laundry, blogging, phone calls, etc), rest, calorie-loading and playing tourists. 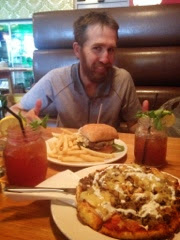 Our Wellington hosts, Carole and Tony, were incredible. We shared several meals with them, including homemade fish and chips and grilled lamb. Tony was in the navy, so he was able to give us some more good history lessons on NZ. It’s been really fun to get to know them. 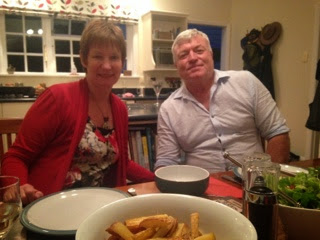 They also took us snorkeling at Makara Beach (Tasman Sea) in Wellington. J was a bit tentative–he’s always wanted to go diving, but is nervous about what lies under the sea. Tony reminded him that there is nothing in NZ that can kill him (but later noted that there have been shark and stingray spotted at the particular beach where we were). In any case, J gave it a whirl and stayed surfaced very close to the shore. It was actually very comical. I, on the other hand, loved it! I really dislike swimming or generally being in the water, but you would never have guessed that. We can finally say we went swimming in the Tasman Sea! 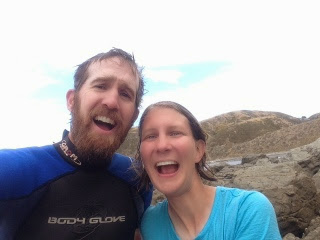 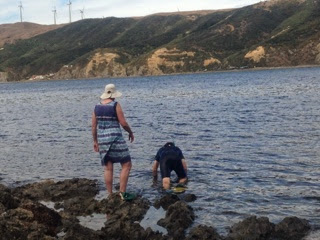 J is crawling, instead of swimming. 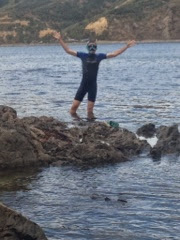 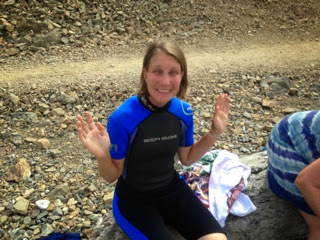 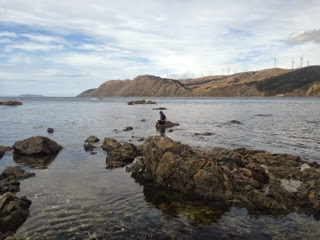 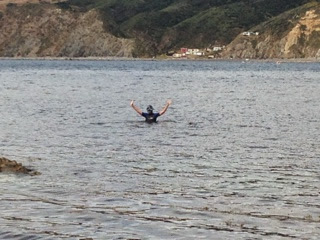 I went way out there!

The main purpose in all of this was to collect Paua. Paua are large, edible sea snails. The molluscs are really only found around NZ. Their black muscular foot is a delicacy, while the blue/green/purple shell is used in jewelry. 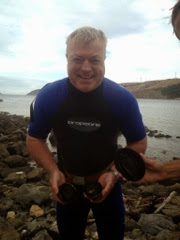 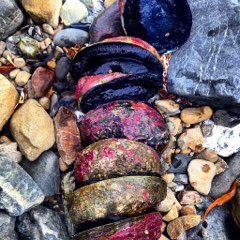 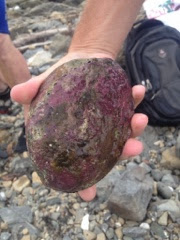 We helped shuck them, then Tony cooked them up for an appetizer. All I have to say is we are hooked! 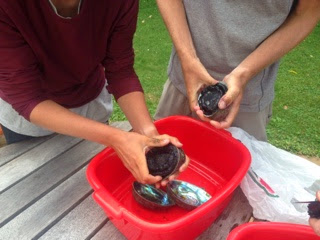 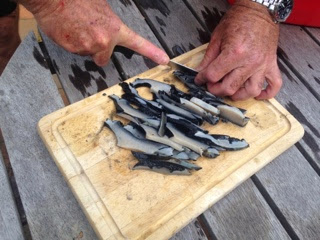 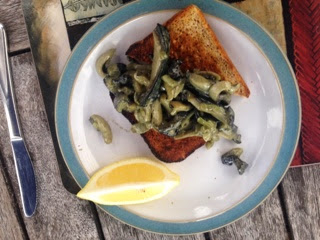 On Sunday, we made our way to downtown Welly. The trail actually did not go through the downtown or harbor area and we only saw it from above, so we wanted to actually go to it. 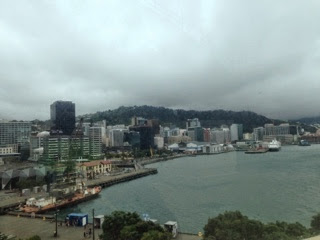 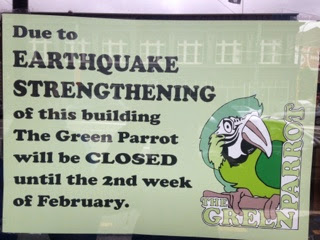 Reminder that Wellington is on a major fault line!

The main activity was visiting the Te Papa Museum. As NZ’s national museum, it had a little bit of everything from Maori culture, historic trends of NZ, art and environmental/animal/sealife exhibits. It was SIX floors, so we saw as much as time and our minds could handle. Here are our favorites.

*Te Papa houses the world’s largest squid. It was accidentally caught in 2008 in Antarctica and since it surfaced and inevitably would die, scientists took it in to study and preserve. The squid’s eye was the size of a soccer ball!!! 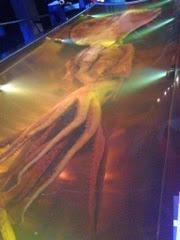 The colossal squid in all its glory

*There was a whole exhibit dedicated to Shrek the Sheep. Shrek was a merino species sheep who evaded being shorn for 6 years (wool shearing is usually done annually), meaning his wool was very thick. When they finally sheared him, there was enough wool to 20 men’s suits. Naturally, Shrek became a national icon, but died in 2011. 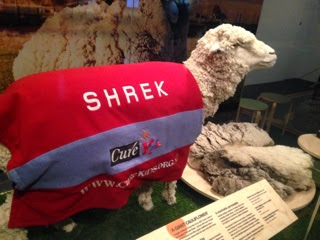 On a side note, I’ve been pretty obsessed with sheep, being here in NZ. I just find them fascinating. One thing I learned and was surprised by was that wool exports used to make up 35% of NZ’s exports, but now the number is down to 3%.

*I have hoped to see a kiwi (the flightless nocturnal bird kind of kiwi–seen plenty of kiwi persons). But it’s just not going to happen. So the stuffed ones will have to do.

The Interislander ferry was awesome and neither of us got sea sick. The boat was huge and had a little bit of everything to keep you entertained (the ride takes 3 hours), but the views were the best part. 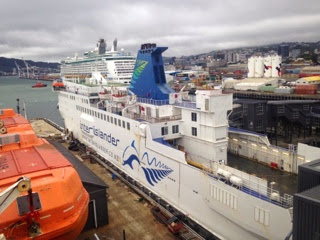 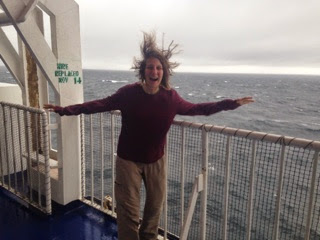 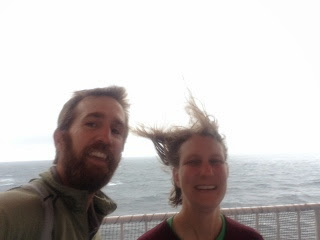 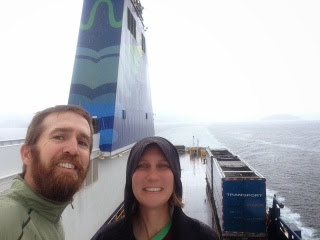 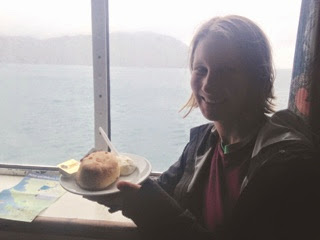 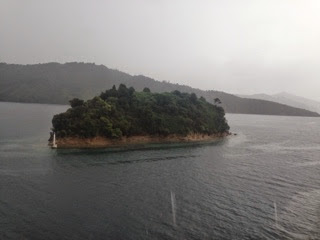 The boat drops you off in Picton, which is the gateway to the South. The weather was gloomy at first, but then it cleared. 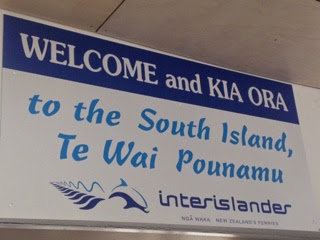 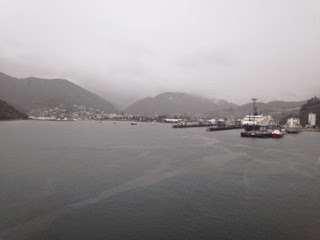 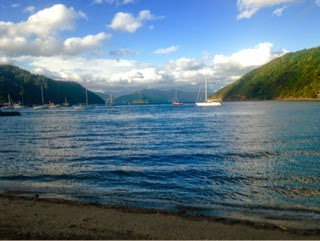 We planned it purposely to arrive in Picton in time for the SuperBowl. J called several bars to verify they would be airing American football on a Monday at 1pm in the afternoon. The SuperBowl was indeed on, but the commercials were not. All we got were rugby commercials! But still, we watched and indulged in some drinks and greenshell mussels. NZ is the only place where you can find greenshell mussels and the color is due to the rocks here. 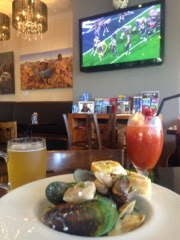 Tomorrow morning, we will take a smaller boat and get back to hiking. The boat will weave its way through the geographic maze of inlets to Ship Cove, where we will get on the 71K-Queen Charlotte Track. Everything on the South Island is so much more remote, the prime example being the fact boat travel is quicker than road travel. Ship Cove is where Captain Cook (who was the first European to land at NZ in the 1700s) first landed.

And so, hiking the South Island begins!