Camping and Paddling in North Carolina

We hopped over the state line this weekend to go camping and paddling with some Danville peeps. 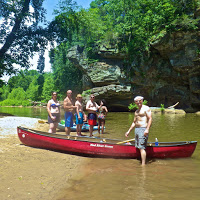 Now that we’ve been back in the good ol’ South for almost 2 months, it really just feels like we never left.  Which is probably why when I didn’t flinch when one of our group members said, “Oh shoot. We need to turn around. I forgot my gun.”

The truth is, there wasn’t any noticeable redneck spin on the camping trip, other than the fact that the beater truck parked in the middle of a field was a more popular hangout than the shaded campsite. Van, our admitted redneck friend, sighed and said, “I love it when there are more rednecks around than me.” 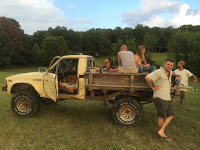 In any case, we car camped at Jomeokee Park Camping & Amphitheater, which is possibly the best kept secret near the very popular Pilot Mountain State Park and Hanging Rock State Park. We couldn’t secure camping in the state parks for our group of 11, so Jomeokee was a last-minute Plan B. Jomeokee is privately owned, has a huge parcel of land with shaded campsites, picnic tables, fire pits, bathrooms and the iconic 2,421-foot Pilot Mountain sits as its backdrop. Nailed it. 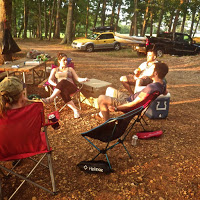 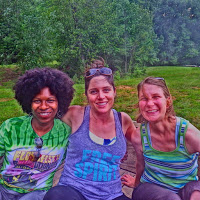 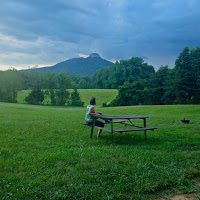 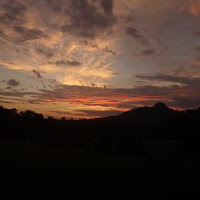 The next morning, we headed out for a 6-mile paddle on the Dan River. J & I purposely left our kayaks in storage in Colorado. We’ve been toting those things around the country and Big Bird has complained that they weigh and slow him down. Thus, we decided the kayaks didn’t need to make the cross-country trip this summer. With 2 paddling trips in the books already, it’s too bad we can’t control Z that decision.

We did have an inflatable 2-person kayak in storage here in Danville. We bought it in 2005, but haven’t used it since 2007. We decided to take our chances instead of renting a canoe from the Dan River Company, who provided our shuttle. We should have put that in the bucket of bad ideas.

We both started in the kayak, then decided our combined weights were a little too much for the kayak that no longer holds air like it used it.

Then J tried on his own. Then I tried on my own. We were slowing down the group and working entirely too hard for a lazy Sunday. Then Van tried to use it as a boogie board. All of these options just needed to go in that bucket of bad ideas. The best option was towing the boat and hitching a ride in our friends’ boats. 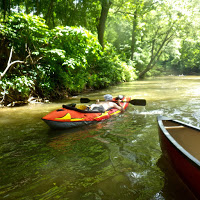 Despite our kayak follies, the float in this section of the Dan River was pretty spectacular. It passes through the Hammer-Stern Wilderness Preserve and Hanging Rock SP with very cool rock outcrops (I think the rock was itacolumite – bendable rock – which I had never heard of). The 6-mile paddle took us about 3 hours, even with the deflating kayak and occasional napping on the job. 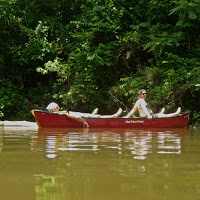