Besides Justin’s mom, who visited in December, we’ve had 3 other brave souls venture into the boonies this past week to spend time with us.

First were our kindred spirits: Paul and Kristen. We call them our kindred spirits for many reasons, but mainly because they are just as keen about sleeping in the dirt and reusing foil as we are. J met Paul back in 2009 at a Parks & Rec event, and shortly thereafter, we had a successful “couples” date introducing myself and Paul’s wife, Kristen. My first post about hanging with Kristen one-on-one is hilarious (I wondered if we would be lifelong friends … LOL). Paul & Kristen have been our go-to active friends. They are the friends who helped us cross train for the AT in 2011, hiked the first 60 miles on the AT with us, introduced us to the Insanity workout in 2013 to help whip us into Rainier shape, the list goes on. 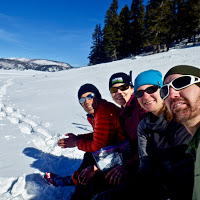 Our other bold soul was Jason. Jason is Justin’s college buddy. We see Jason and his wife, Adrienne, pretty regularly even though they live in Ohio. This is because we are often driving across the country and Columbus, Ohio, is a convenient stopover. Like this time, and this time, this time and this time (you get the picture). We actually claim Jason and Adrienne’s home as one of our many addresses. But I digress. When we ARE settled, these two usually make their way to visit us. Adrienne couldn’t make it this time around, but she did send Jason with some clothes for me (most of my wardrobe comes from A or my SIL!). 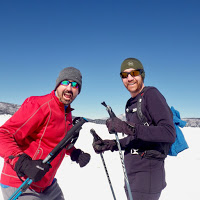 These 2 and the stories they can tell …

Now, just in case you think you’ve missed out on visiting us in yet another one of our random locations, fear not and brace yourselves. We will actually be returning to Fenton Ranch for the fall 2017 through winter 2018. I know, simply amazing that we will keep an address for more than one year!! (More on our future plans in another post)

To wet your palette, here are the top 5 reasons to unplug and visit Fenton Ranch.

1) We will put you to work. Either moving snow, breaking up ice or chopping wood.

You would never know Jason had never chopped wood in his life — a born natural!

2) We will enjoy outdoor recreation. We have trails out our back door and are surrounded by national forest, so there is no shortage of opportunities to play. We took both Paul/Kristen and Jason to Valles Caldera National Preserve for some snowshoeing. I actually think I like visiting that area better in the wintertime than when we did in the spring. The National Park System took over management of the Valles Caldera in October 2015 and it is growing in popularity. The park is a massive crater left by a super volcano eruption from a million years ago. Oddly enough, it has been the filming site of dozens of popular movies and TV shows, like The Missing and Longmire. Cool sites to see and vast land to explore! 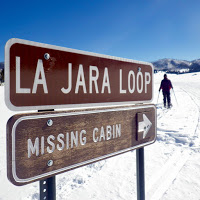 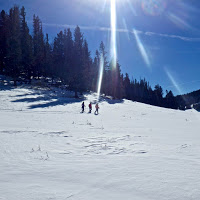 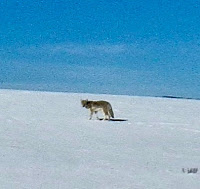 Yes that is a coyote!

This was Jason’s first time snowshoeing! Lots of firsts for him on this trip! 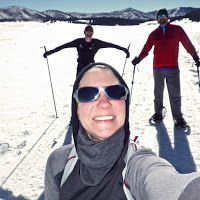 Backyard shenanigans in our DEEP snow are just as fun, but are straight uphill! 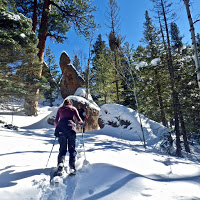 Of course Paul & Kristen were smoking me on the uphill … I thought I would have the edge living at 8,000 feet, but the altitude didn’t even phase them. 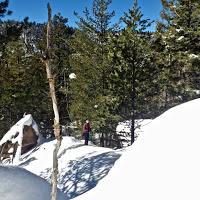 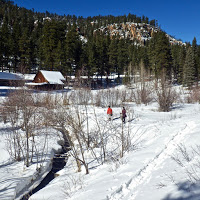 3) We will enjoy indoor recreation. Anyone who knows us well knows we love to play games. The Bean Game is our go-to, but we may have discovered a new addiction thanks to Jason: Sushi Go! This card game is similar to the Bean Game, feeding Justin’s competitive edge. Besides games, we discovered a special indoor activity thanks to Paul and Kristen … wooden spoon making! I would say we have a lot to learn in the craft, but it is fun to try. I also read a few chapters of my book to Paul & Kristen, which reminded me I really need to get back to editing it (reading out loud is a humbling way to edit!). 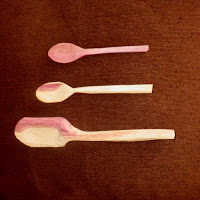 Justin and I worked our first spoon together!

4) We will take our cat for walks. Mrs. Gibbles—the once stray mama cat who chose Fenton Ranch as her home and us as her owners—follows us everywhere! 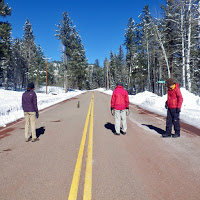 5) You will spend very little money. Aside from your flight and rental car (under $100 for multiple days!), we live in the middle of nowhere, making it hard to spend money. We did venture down to the sole bar 35 miles away from us with Jason, but a meal out there is not going to break the bank. 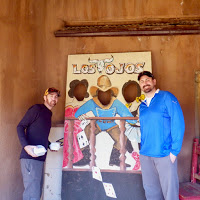 Have no fear, civilization is only 30ish miles away … 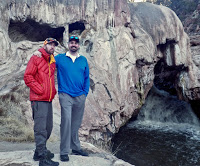 I know I am always trying to convince you that Fenton Ranch is a magical place, but we are excited to keep it as one of our many homes!
Categories: Blog Post, PostsBy plavigneFebruary 7, 20173 Comments
Tags: Indoor RecreationNational ParksNew MexicoOutdoor RecreationVisitors