A visit to Pinnacles National Park was last minute when we noticed that it was “not too far out of our way” on our drive from San Jose to Fresno in between events. We cut it a little close on time to take showers before our Fresno presentation, but that’s our modus operandi! 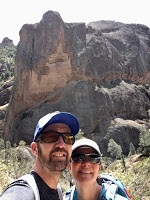 Pinnacles was first established as a national monument in 1908, but upgraded to a national park in 2013, marking it as the 59th and newest. 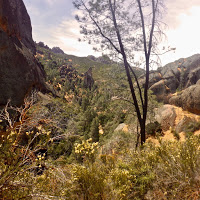 There are 2 entrances for Pinnacles (East and West) and while trails connect the 2 entrances, no road does. We chose the East entrance and opted for a 6-mile out-and-back hike to Balconies Cave. The talus cave route is short, fairly open and doesn’t require a guide, but you do need a headlight. 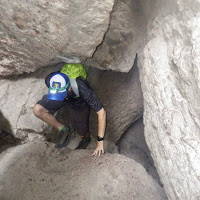 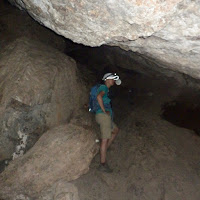 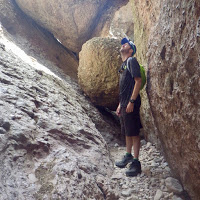 With its large rock spires, crags and canyons, Pinnacles is a nesting area for the California condor, one of the largest birds in North America (weighing 20 lbs with a wingspan of 9.5 feet). I thought I may have spotted a condor in the distance perched on a treetop, but I’ll never know for sure. 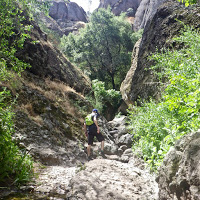 Then for the weekend, we had planned to be in southern California for a very special park we’ve been wanting to visit for YEARS! Channel Islands National Park is one of the off-the-beaten track parks. It may be accessible given its location not too far from LA (and 25 miles from the nearest coastal town of Ventura), but it is harder to get to because it requires booking a boat as well as a camping permit in advance (which sells out months in advance). Trips to the Channel Islands are also weather-dependent with the ferry service. I’ve heard about people being stranded on the islands for days!!

There are 5 islands that comprise the park and you can camp on all 5. We chose the largest—Santa Cruz Island. And although we watched the fog roll in and out often, we had perfect weather.

Santa Cruz is about 96 square miles and has two docking piers–Prisoners and Scorpion. The boat dropped us off at Prisoners Cove, where we hiked 4 miles in to a campsite (a gorgeous spot, I might add). There is no water at the backcountry site, so we had to pack it all in, making our packs unusually heavy for an overnight trip. 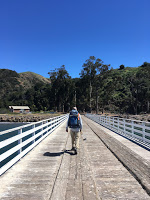 The next day, we hiked another 10 miles to Scorpion Cove to pick up the boat back to mainland California. One thing that struck me was the sweet smells of the wildflowers and grasslands, including fennel and sage. 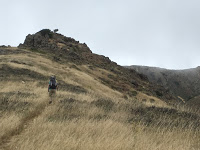 We added a 1.5-mile bonus hike around Cavern Point before leaving, and it was a definite highpoint. 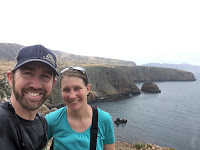 One specialty of Santa Cruz Island are the native plants and animals that you can find nowhere else in the world, including the island fox—the smallest in the world. They are less than 13 inches in height, 22-27 inches long and weight less than 4 lbs!!! Unfortunately, they are very conniving and comfortable with human contact.

On the return boat ride, we were treated to several pods of dolphins swimming around the boat!