You are here:
There’s a reason Isle Royale National Park is the least visited park in the lower 48. It has nothing to do with its beauty. It has to do with the fact that it is WAAAAAAAAAAAY up north in the middle of nowhere.

Allow us to entertain you with details about our 45.3-mile backpacking trip across Isle Royale National Park. 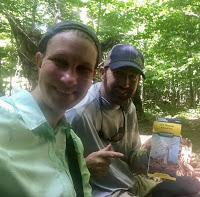 When we were planning our return western route for our summer speaking tour, we thought, oh hey, we have a full week, let’s go hit some parks and highpoints that are out of the way while we have this time. “Out of the way” is a relative term and for most people, it doesn’t mean a 2-day drive to get there.
But, we’re committed to seeing all we can about America, so to the north we went.
Isle Royale NP is an island off the Upper Peninsula of Michigan. People seriously understate Michigan. When you meet someone from Michigan, they hold up their left hand (because that’s the shape of the state) and point to where they live. But then there’s the whole Upper Peninsula, across the 5-mile Mackinac Suspension Bridge (the longest in the western hemisphere). The “UP” is a forested region of Michigan bordering 3 of the Great Lakes.

As you reach the northern side of the UP and peer across Lake Superior to Canada, there sits several islands, one of which is Isle Royale NP. It’s actually a chain of islands totally 850 square miles, but 75% of it is under water.
You can either take a 3-6-hour boat (depending on the departure/arrival port) or a 45-minute seaplane ride to the island. After much debate and detailed planning of our tight itinerary, we opted for the seaplane ride. 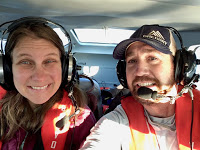 We used Isle Royale Seaplanes (the only vendor currently allowed to land at the NP) and it was smooth flying with our pilot Tomas both directions. It was also a wonderful way to see the whole island!!!

We landed on Monday morning at the Windigo side of Isle Royale. We went in without a real itinerary, just knew we had 3.5 days to get to the other side of the island at Rock Harbor.

Rock Harbor: much more crowded & built up
There are 165 miles of trails that meander around the island, so the options are really endless. Backcountry permits for camping at the established sites are free and operate on a first-come, first-serve basis. So while you discuss and plan your itinerary with the ranger, you don’t need to stick to it.
After talking to the ranger and some others, we opted to take the Greenstone Ridge. It is the most popular route across the island, and most direct.
Day 1: 12.6 miles to South Lake Desor Camp
Day 2: 16 miles to West Chickenbone Lake Camp
Day 3: 13 miles to Threemile Camp (on Lake Superior)
Day 4: 3.7 miles to Rock Harbor to meet our afternoon seaplane ride
Total mileage: 45.3 miles
All of our camp spots were beautiful, on one of the many island lakes. 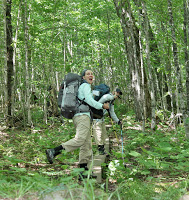 That’s Canada in the distance! 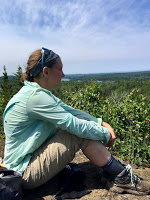 There’s a very cool history about the island. At one time, there was a community of 130 people living on the isolated island. Now, the NPS operates it seasonally, closing during the winter to give the animals a chance to run nature’s course.
Speaking of animals, that’s another neat piece of history for Isle Royale. The island’s distance from the mainland has limited the diversity of species; only those who able to make the crossing of Lake Superior have called it home. Wolves crossed via ice bridges on Lake Superior from Canada years ago (though there are only 2 wolves left right now!). Moose swam to the island and are still thriving. And no one knows how the red squirrels got there.  It’s pretty unusual to think about a place where wildlife is ever-changing! We saw no wolves (but maybe wolf poop?), only 1 moose, but plenty of other goodies, like hearing the loons every night, lots of cool snakes and the most beautiful fox I’ve ever seen. 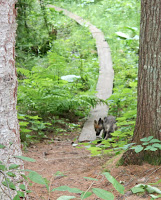 Sorry, I really need to work on my wildlife photography!

Two snakes intertwined … we’ll leave you be …
Our verdict about Isle Royale is that it is gorgeous. It really reminds us of hiking in northern Maine. With just as much mud! 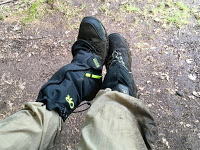