Behind the Scenes of a Photo Shoot

In addition to our bylines in Backpacker‘s Spring 2018 Gear Guide, there are also some full-page pictures of us tucked in the pages and I wanted to share our photo shoot story before the issue leaves the newsstands (you know, in case you want to pick up a copy for us to autograph). 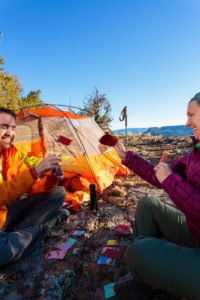 This professional shot of us playing cards didn’t make the magazine, but I like it. We definitely hit delirium at this point in the day! (Unless noted, PC for photos in this post: Michael DeYoung)

Just to be clear, we are not starting a side business of modeling. I’ve said this before, Justin has a hard time saying no to anything Backpacker-related, so when they asked us if we could participate in a mini photo shoot for this year’s Gear Guide, we (Justin) said giddy up.

And once again, the whole ordeal was WAAAAAAAAAY more work than we could have guessed. The photo shoot took place back in January and we connected with the professional photographers, Michael & Lauri DeYoung, who were conveniently based out of Taos, NM. 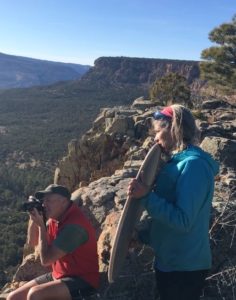 Anyone who is into photography knows dawn and dusk make for the money shots, so our day started at 6:15am and ended at 8:30pm! Not for the weak or weary. 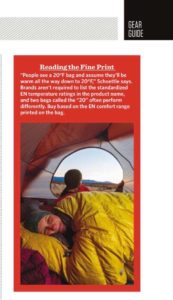 Thankfully, our 6:30am shot ended up in the magazine (pg 83), making the sunrise scenario worth it. 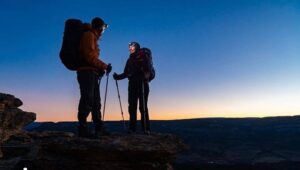 Our last shot of the day at dusk did not make the magazine, but is still worth it.

Location is key, so the DeYoungs picked a mesa overlooking the Chama River in northern New Mexico’s Carson National Forest for most of the shots. To get to the mesa, we hiked about 3.5 miles along the Continental Divide Trail.

If you don’t tell anyone, I’ll let you in on a few secrets from behind the scenes.

1) Fortunately, New Mexico’s winter has been so mild. Because the photo shoot was meant to portray summer. Hence the shorts and short-sleeved shirts in many of the shots. In between shots, I was bundling up!

2) We were all carrying A LOT of gear. Of course the photographers had their camera equipment, but Justin had 2 pairs of shoes and we both had several changes of clothing and jackets. Thankfully we only had to bring one tent, but we had several sleeping bag choices. The goal was to capture different scenarios featuring some of the gear being featured in the upcoming issue, but also to capture a tester’s life. 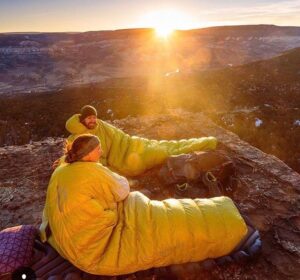 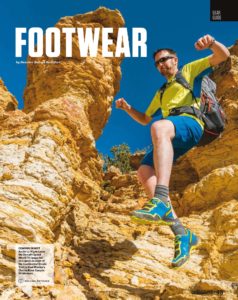 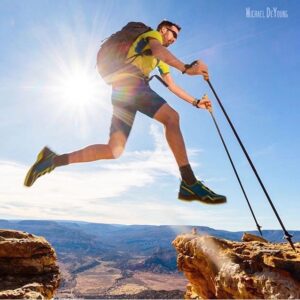 5) I didn’t really plan very well for a summer photo shoot. In that, I didn’t shave my legs (or armpits for that matter) or paint my toenails. I became really nervous when Michael was taking lots of shots of me in capris with my socks off lounging around. I rolled around for several shots, changed clothes a few times, changed my hairstyle, put shoes on, took them off. THANKFULLY, what ended up on page 66 of the magazine were none of the ones with my hairy legs and unmanicured toenails! 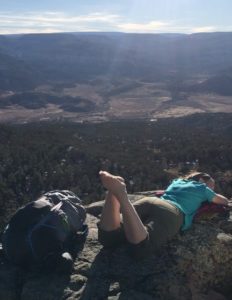 Although I’m sure they could have “fixed” the photo so you couldn’t tell of my poor hippy hygiene (PC: Justin). 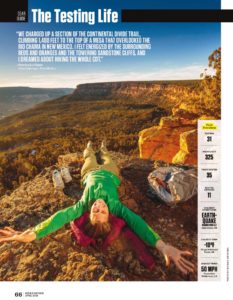 So, that’s the day in the life of a gear model. Even though we were EXHAUSTED by the end of the day, we had fun. And it’s even more rewarding to see the pictures splayed across the pages of the magazine.

Oddly enough, we’ve actually done a photo shoot for Backpacker before. In 2013, we were in a Goodyear Tire Ad! And my blog post about it tells the same story: long day, hard work. I guess I am glutton for punishment. Or I am married to one.