I already boasted about day hiking in Denali National Park in my last blog post and we are definitely NP lovers, but if you are looking for some less crowded hidden gems, the place to go would be Denali State Park. The State Park has 300,000+ acres and borders the east side of the National Park.

Here are the basics for the hike we chose:

Curry Ridge Trail to Lake 1787 (named for its elevation)

Mileage: 7.3 miles out and back

We camped in the state park last Thursday night, then allotted ourselves a half day to do some hiking in the park before heading to an evening event. We picked the newest trail—Curry Ridge Trail to Lake 1787—and it did not disappoint.

The Curry and Kesugi alpine ridges represent the backbone of the park. Caught on the right day, you are rewarded by the coveted panorama of the Alaskan Range, and even Denali. However, if the clouds do not part to reveal “the Great One,” the superb vantage point touts its companion peaks, as well as the wide valley cut by the Chulitna River, ice-carved gorges and glaciers (Ruth Glacier), all of which will be rewarding enough. Let my amateur photography skills speak for themselves.

If you have the best eyesight ever, you might be able to spot the tip of Denali in the clouds.

Denali is only 40 miles away as the crow flies and you pretty much catch the jaw-dropping views through the whole hike up the gradual switchbacks among the spruce, birch and balsam trees. 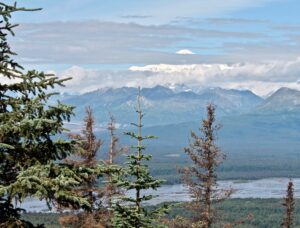 Starting to clear … can you spot it???

You’ll eventually come above timberline and to a patchwork of rolling tundra and alders. You can hike all the way down the lake, which is a great place to observe moose (but watch for bear through the alders!). Rocky Knob makes for a prime lunch spot with 360-degree vistas of the lake and the mountains. 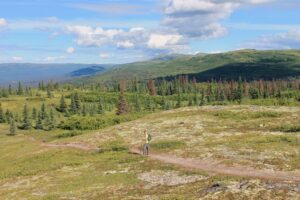 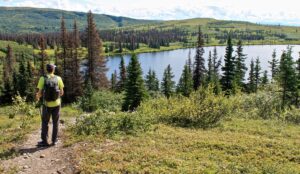 Our timing was not only perfect to catch the right weather & clear skies for the views, but it’s also blueberry season in Alaska! 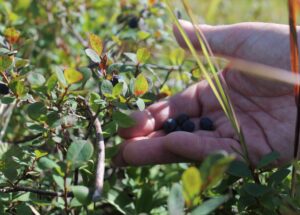 The trail is actually still being expanded with hopes of connecting it to the existing Kesugi Ken Ridge system and even developing established campsites near the lake. We actually would like to return and do this as a backpacking trip.

But since you made it all the way to the end of this post, I’ll give you the BEST secret pro tip. Kesugi (or K’esugi) Ken Campground (Mile 135 off the Parks Highway) opened in May 2017. Not only is the campground itself pretty beautiful and well run, campsite #4 (which you need to reserve online for $22/night) is quite possibly, the best ever. Look at these views right from our tent door … only found from site #4! 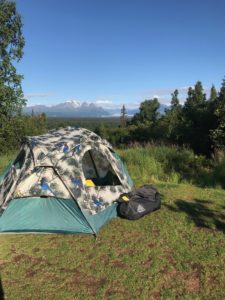 The morning alpenglow was to die for. If you look closely on the right side, that’s Denali’s tip again. The mountain on the left is Mount Foraker.

Later in the day, Denali really wanted to come out, but we still just caught glimpses (it was enough for us!)

So another favorite hike and place to return to, adding to our list! For the record, this was one of the few days in August when we didn’t have any rain!