Justin & I do not like to boast, but when it comes to backpacking, we eat miles for breakfast. So I think we were both a bit surprised when our most recent backpacking trip gave us a major kick in the butt. 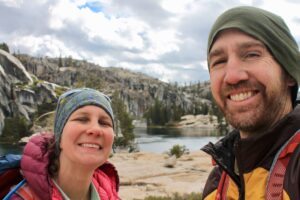 Let me back it up. Knowing we’d have all of September in California surrounded by several national parks and 5 (or more?) national forests meant we had endless choices for taking a backpacking trip. People gave us TONS of stellar suggestions, but I really wanted to get out there, you know, to a tucked away place where few had been. I was mainly focusing on the Emigrant and Desolation Wilderness, so I spent days poured over my beloved National Geographic topographic maps picking out potential routes. I also stumbled upon an Instagram feed that features the 100s of alpine lakes in these areas, matched the lakes to the map and finally chose our destination: Boundary Lake.

Area: Trailhead is in the Emigrant Wilderness / Stanislaus National Forest while Boundary Lake is in the northwest corner of Yosemite National Park ***permit obtained through national forest since parking at NF trailhead

Total Mileage: 26 miles (out and back)

Boundary Lake is aptly named as it sits on the border of Emigrant Wilderness and Yosemite National Park and you crisscross the boundaries throughout the trek. But since the trail to access it starts from the national forest side, it lacks the typical traffic of Yosemite. With very few trail notes from the interwebs, I knew we’d be in for an adventure, but I had no idea really … 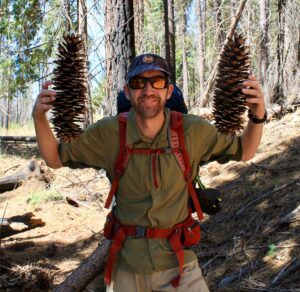 It was 13 miles to the lake and our over ambitious selves thought we’d get to the lake by dusk no problem on day 1. But, of course we didn’t. Besides the fact that we didn’t hit the trail until 2pm, there was more route finding than we expected! Then my Garmin GPS watch died (I had a backup up thankfully). Then we ran out of water. Geez louise, you’d think we were rookies!

We found a stellar campsite (sans water) on Lookout Point at 7,000 feet overlooking Cherry Creek Canyon. With less than 6 miles to go in the morning along a ridge, we’d have practically the whole next day to enjoy Boundary Lake! Stoke was still high, despite technology and water losses. 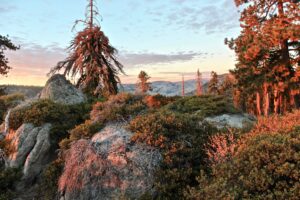 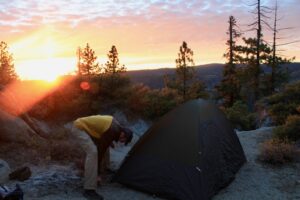 We slept in (of course) and didn’t hit the trail until 10. Unfortunately for us, we didn’t find water until nearly 3 miles from camp at Sachse Spring, so by this time, we were beyond parched. There were a few “moats” along the way, but we wouldn’t call those reliable. At the reliable spring, we collapsed, drank up and resupplied our water, again thinking, just 3 miles to go, we’ll still have most of the afternoon to enjoy the lake. 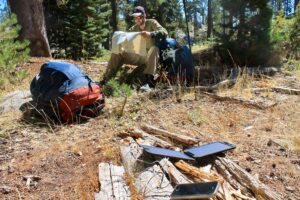 But then. Then. We come upon the last 2 miles, which happens to be across a valley of granite. Pictures will not do it justice and it is hard to describe unless you’ve hiked across boulder paths, but basically, you better know where you need to go. There’s no beaten down path. There’s no shoe prints. It.all.looks.the.same. To be fair, there were a few scattered rock cairns, but spotting stacked up rocks among a sea of jumbled boulders is for the birds. I seriously don’t know how those early trail pioneers (and even off-trail travelers today) do it. 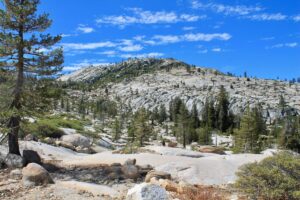 Can you even spot Justin?? 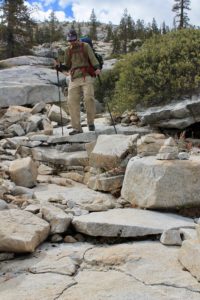 We were looking for a junction noted on the map. I made another rookie mistake and swore we needed to go DOWN in the valley to find the junction to the lake. Justin trusted me. (For the record, neither Justin or I are the best map readers. We get by and clearly rely on maps in the backcountry, but we are typically directionally challenged. My excuse this time is that our trip was on both sides of the map and in a crease, so we were flipping back & forth to assess our situation).

Down, down, down we went and we came up a stream and thought, oh hey, we must have missed the junction, but yep, we’re coming close to the blessed lake.

But then the stream continued for a mile. Nearing 2 miles, we decided to check the map again. Hahahahaha. We weren’t supposed to go DOWN when we got to the granite valley of white! We were supposed to go UP!!!! 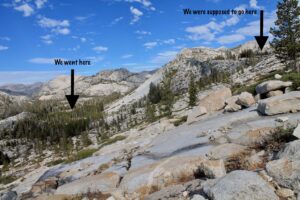 I was seriously ready to give up. I ran out of water AGAIN and now we had to double back (my backpacking pet peeve). This was no longer type I or type II fun, but becoming type III fun!

We climbed BACK UP to where we started. After spending too much time trying to find the darn junction and/or any semblance of a trail—to no avail—and with nowhere else to go but up, I dragged behind Justin. He stopped at a cliff and waited for me to catch up. I thought if this freakin lake is not below this cliff, I’m beelining back to our last water source and calling it a night.

You know that saying, the climb is tough, but the view from the top makes it worth it. 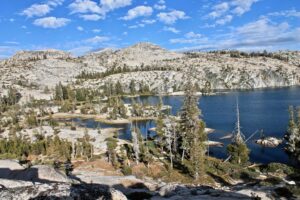 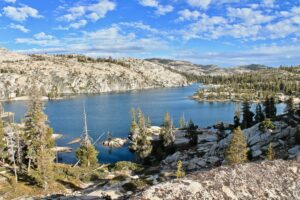 Like it was photoshopped by God, we were overlooking a piece of paradise pie. Splashes of silvery blue and green rising out of the large expanse of exposed granite made my tired bones sing for joy. We finally reached Boundary Lake!!!!

By this time, it was 4pm, so we didn’t have as much time as we wanted to lounge around. But the sunset and lake definitely put on its best show for us. The environment was so quiet, still and peaceful, it was like the Earth was holding its breath. And we spent the next morning leisuring exploring around to our hearts’ content. From dusk to dawn, we saw a really nice range of light around the lake. 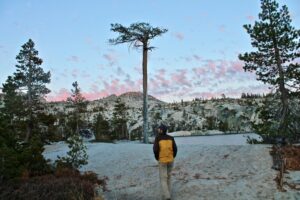 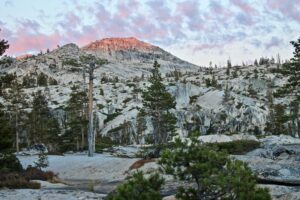 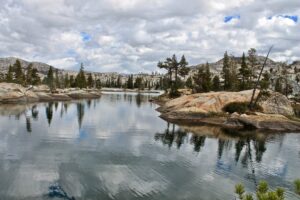 Of course, the return trip back to the trailhead and car was a straight shot. I don’t even think we took the map out at all! We did have some excitement when we heard the sounds of a crying dog for several minutes. Since we saw no people and no dogs are actually allowed on the trail, we believe it must have been a coyote being attacked by a mountain lion!!

Now from the comfort of my computer processing all the gorgeous photos, I’ve downgraded the trip to Type II fun, mainly because I’m still reeling over the fact that we both ended up doing about 33 miles for this trip, instead of the 26 it is. But, I am still drawn to the pitch: who can say they visited a lake in Yosemite National Park and saw ZERO people for 48+ hours? 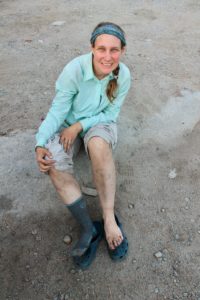