I’ve been super busy at work this week and every night, so my weekend update is a little delayed …

Last weekend, J and I played house with my almost 6-year-old nephew, Bones, and 2-year-old niece, CurlyLocks. We volunteered to watch the kids for my sister, QuickQuestion, and brother-in-law, Yankee, because they had a christening to go to. We figured since we hadn’t seen the kids since Christmas, it’d be a good opportunity to spend some QT with them. This is the first time we’ve been alone with the kids for such a long period of time. Well, it was only one day, but still. J asked if it was nap time at least 9 times. He was a trooper. QuickQuestion of course left us a detailed list on what they can eat/not eat, meds, etc. Actually, I really wanted the list because damnit, kids are complicated and I barely can take care of myself, let alone two (three?) others.

The day turned out great. We took the kids to Kent State Park in CT for a hike up to the top of the waterfall. I debated about doing this. As you all know, J and I are outdoor enthusiasts and we want to get Bones and CurlyLocks as much interested in nature as we are. But, I wasn’t sure if they were too young for a real hike. I feared we would be carrying them the whole way and that they would be disinterested in trees, rocks and the waterfall. But it was quite the opposite. They had more energy than us!!! Even CurlyLocks wanted no help climbing the mountain, though she is still at the age where she falls a lot and makes my heart drop every time she runs on pavement. In any case, they were mesmerized by the 70-foot waterfall and Bones asked a ton of questions about the trail and stuff. That just made us so happy. To top it off, Bones went #2 in an outhouse!!!! Proud moment for us. Next, we’re going to teach him to dig a hole to do his business.

So now I’m headed to PhilaSanFranash. Actually, the Nashville part won’t be for another week and a half, but I am going to Philly this weekend, then straight to San Fran. In Philly, I’m going to see Chile’s new babe!!!! I’m staying with Charlotte the whole time and we plan to catch up and hear about Chile’s birthing experience. I’m also going to try to see RedJeepTrvlr (and her little boy) Wednesday before I fly out to San Fran. Unfortunately, theChief will be out of town when I’m there, so I won’t see her. She’s actually in Israel vacationing!

In any case, I’m excited for the trip. Then I’m going to San Fran for work. I have one day to play and will see J’s Grandma who lives out there. I have to give myself a premature pat on the back. In both Philly and San Fran, I will have to navigate the mass transit system (with all my luggage in tow) to get around to see people. I’ve done it before, so I know I’ll survive, but I’m not a city girl, and this is still a big venture for me.

In the meantime, J is going out to Vegas next week with some Prep boys (Beef and DrPilot) and others. Vegas, his second love next to Alaska. All I can say is watch out for the strippers and bring home the bacon baby. He usually is pretty good for that.

With that, I’ll leave you with some pictures of the kids. 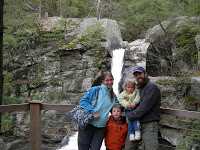 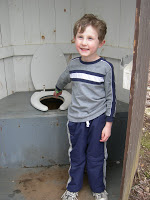 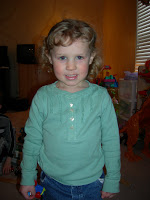