Delayed recap of trip to Music Capitol of the Country

I’m a little behind, but I wanted to share details about my trip to Nashville! My company’s home office moved there from Scottsdale last year and this was my first time visiting it. I was a little nervous about going there because there was a whole staff of 15+ IT, sales, marketing and management people I had never met. All of the writers, except our editor-in-chief and any new hires, are remote like I’ve been for the past 3 years. So going to the new office felt like I was starting a new job!

Anyways, I stayed with BossLady, who’s not only my boss, but my friend too. She trained me when I was a freelancer, then, we worked together when I became full time for a few years before she became my boss. I’ve had 3 bosses at my company in almost 6 years. She is by far the best and I’m not just saying that to get brownie points!

Overall, it was crazy to be back in an office; it always is. I value silence and freedom, especially when I’m writing. Of course, the free pizza, cupcakes and constant camaraderie do make up for this. Everyone was so nice there – good ol’ Southern hospitality. I was there to help train our new writer. Training was really fun and different! 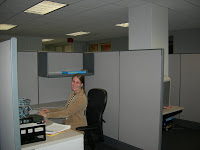 BossLady and the new writer did their best to show me around Nashville in my 3 short days there. We only got to drive by Vanderbilt and Centennial Park, but there were other highlights. BossLady and I ate at The Yellow Porch, the two of them took me to Radnor Lake State Park at lunch one day and then, the new writer insisted BossLady and I join her for a night at The Station Inn, a pretty famous honky tonk bar. 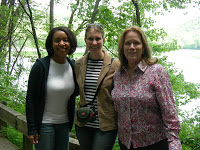 We saw the Doyle and Debbie Show. Um, this was some strange stuff, folks. I’m not sure how to describe it. This couple, known as “America’s country music sweethearts,” actually appeared on Conan O’Brien recently. In any case, their skit pokes fun at country music and the battle of the sexes. Of course, it is sung in the traditional country music banter. They sing about being “barefoot and pregnant” and “fat women in trailers.” If you are offended easily, this is probably not the best show for you. It was fun and I’m glad I gave it a try. Will I return to see the show again? Probably not. But I did like The Station Inn. 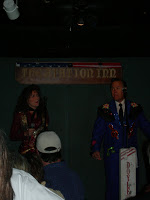 Overall, Nashville is a pretty cool place. Yes, it is definitely a city driven by music, but not just country music. I did find it hilarious that about 4 people on my plane out there had their guitars as their carry-on bag!