Rockstar, an old coworker from Phoenix, visited me over the Memorial Day weekend and when I say we tore the town up, I mean it! 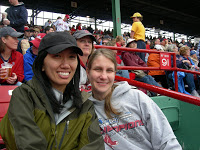 Thursday: Red Sox game! Great seats, good game. The only downside – J couldn’t join us even though he bought a ticket too. Unfortunately, he had a blond moment and thought he was flying out at 7pm, not 4pm. So I got to see Fenway before him! I must say, I liked Wrigley better. Even the hot dogs were better. After the game, Rockstar and I went over to Harvard to try to feel smart. It didn’t really work. 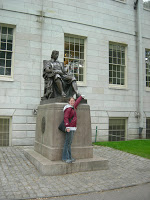 Friday: Drove the coast of NH and Maine since Rockstar never saw the Atlantic Ocean, nor any lighthouses. We had to stop like every 5 minutes for Rockstar to get a “seafood” snack. Obviously Phoenix lacks in that department. I feel her pain as I yearn for authentic Mexican food all the time. Anyways, we did eat a lot of seafood and had a very nice drive. I love driving, especially when there’s no schedule and you’re just enjoying the sites. I usually like to name all the places I eat, but that would just be too many. Seriously. My favorite, though, was “Lobster Shack” at Two Lights (lighthouse) in Maine. Good food, secluded and a beautiful view.

Saturday: Back to Boston to play tourist. Did the Freedom Trail. Lots of walking and ended with an unplanned trip to the top of the Bunker Hill monument. We literally didn’t know what we were getting ourselves into, but 200 steps later, we were at the top. We did eat more seafood for lunch, of course, then yummy Italian food in the North End for dinner. On a side note, I am getting a little better at driving in Boston. It helps that Rockstar was a great navigator. Still, if I can avoid driving in that damn city, I will.

Sunday: More driving around and exploring. We checked out “America’s Stonehenge” in NH and determined that it was just a tourist trap. We also checked out a heavy metal festival that was going on in Manchester because that’s Rockstar’s scene, but realized we were in the teenage wasteland, so moved on. I tried to take Rockstar on a short hike, but once I told her we’d have to check for ticks after the hike, she decided she could do without the hike. Checking for ticks is routine for me when I run …

Overall, we had a great time together—some R&R we both needed. Rockstar liked the New England area and called New Hampshire people the “Nice Hampshires” (I would agree!). It’s great when you have a houseguest that is easy to please. The only things she does not like are bugs and ghosts … wait, aren’t those the things I like so much? Haha.

J, on the other hand, spent his holiday weekend doing man stuff with theHoss, who now lives in Ohio. Pittsburgh Pirates game, gambling in West Virginia, cornhole games (don’t ask – it’s apparently a Midwestern thing) and golf. He is still in detox trying to sweat all the alcohol, Primanti Bros sandwiches (or paninis as J incorrectly called them) and magic cookie bars. 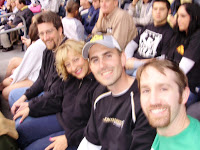