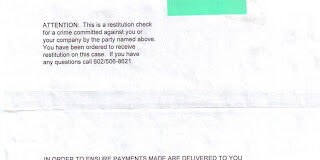 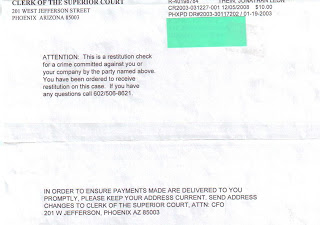 When we were in Danville this month, I had a strange piece of mail waiting in the mailbox. Mind you, we stopped our mail 18 months ago, but somehow, the post office delivered a check from the Superior Court of Arizona.

From 2004-2007ish, I received checks for $10-20 from the Superior Court of Arizona on a monthly basis. Those were my restitution checks from the guy who broke into my car in Phoenix. Whatever work he was doing in jail, his profits were coming my way. Then the checks stopped. I even called to make sure they had my updated address, because, hey, I missed my $10!!!

“Oh, I’m sorry Miss, the inmate was released and we’ve lost track of him.”

“For now he is. You’ll start getting your restitution again once they track him down or if he comes back to jail.”

I had many sleepless nights after that (not really), but apparently he’s back in jail. Because my checks have resumed. And I couldn’t be happier.

How did I come to get restitution on a measly robbery, you may (or may not) ask?

It was about 3 a.m. and J and I were asleep in my tiny apartment in the ghetto of Phoenix.

Pounding on the door.

J: “Babe, I think someone is knocking at your door? Do you think it’s that guy from that bar you used to hook up with?” Mind you we had only been dating for a few months. No Mom, J wasn’t sleeping in my bed … he was on the couch. And no, I never hooked up with random guys from bars who made bootie calls at 3am … sheeesh.

So I go open the door and sure enough, there are 2 policemen and my neighbor standing there.

“Your car has been broken into.”

“Oh shit.” At this point, I’m practically crying and I felt so violated. Mind you this was my first time being robbed. Little did I know that I would be robbed like 5 more times in the next 10 years. Oh how innocent I was.

Enough of my dramatization, I’m going to summarize the rest now. My car window was broken, but aside from a few CDs, nothing was taken. Not even my portable stereo! Apparently, the person was looking for something else. While I completed the police report, J and my neighbor went out looking around the neighborhood for the person. The neighbor actually witnessed the crime and gave a full description to the police (I baked him some brownies in return). Anyways, they found my CDs and crushed sunglasses (which the police had run over), then oddly enough, they ran into another shady neighbor who basically gave up the person. Apparently, the thief actually meant to break into his GREEN car because he owed him drug money or something. The cops got a full name and address of the thief.

I see a recurring theme here where I live in shitty neighborhoods. Do you see that too?

I got my window fixed. Went on with my life. We even sold the wrench the guy used to break my window (which we didn’t find until later, or else it would have been evidence) in our yard sale for $1!

One random day, I got a phone call from the court. They wanted to prosecute this guy for some other crimes, but didn’t have enough evidence. They could put him away, though, with my case. I didn’t have to appear in court, but I had to fill out paperwork and write a letter describing the “hardship” he put me through. They really encouraged me to play it up and J took full advantage of that.

The guy was charged with burglary in the 3rd degree (a Class 4 felony) and sentenced to 2 years in prison. My total restitution should be $1,269.82. By my calculations, I should get that total amount by the time I retire.

Okay, I know this is no joke. People are victims of “real” crimes out there. But, I find my situation extremely humorous.