Some people say Christmas is their favorite day of the year. Others say birthdays. Our favorite days come when there’s an REI garage sale.

Training is intense and takes place over several months. It’s a mental and physical challenge.

On Saturday, we awoke around 5am and headed to the Boston area to get on line. At 7:15am, we were number 35 in line. By the time the store opened at 10am, there were many others behind us. 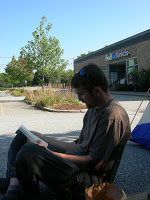 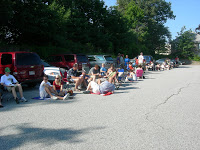 As we usually do–with a few elbows thrown (JK) and wheelin’ and dealin’ by J–we scored big. We were actually looking for certain items and found them! I have to share some of our best bargains …
Camping chair with foot rest (originally $65) … $3.83
Thule bike rack (originally $120) … $9.83
Men’s bike (originally $799) … $325 (On a side note, J has been looking for a bike for months and he finally found a good deal this week that he settled on, but it was twice the amount of the garage sale special!)
Women’s bike (originally $450) … $125

After shopping ’til we almost dropped, we met up with Always Game for a late lunch at The Friendly Toast. We even braved the streets of Boston/Cambridge without getting lost! Good food, btw, if you don’t mind clogging your arteries once in awhile. 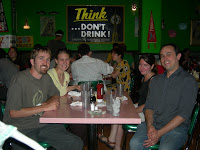 So here we are with our new bikes to add to our diversified profile. We took them for a 10-mile spin on Sunday. We discovered that Concord has a lot of farmland. Who knew? Anyways, watch out Lance. Here we come. 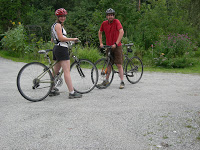