Whatever you do, take care of your shoes

Like we often do, J and I overestimated our energy and our ability to do everything we want in one spot. So Monday’s day of adventure turned out to be a string of follies for us, although it turned out just fine in the end.

From our NY hotel, we headed north deep into the Adirondacks for our big hike to the highest peak in New York – Mt. Marcy. It was a gorgeous day and we hit the trail later in the day than most people, so it wasn’t too crowded. When we summitted at 5,344 ft, we were pretty much alone to enjoy the views, which were of course spectacular on the clear day. The 14-mile hike took us just about as long as we thought—7 hours. 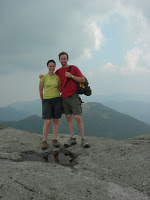 Our first folly here, however, was that I read the literature wrong and thought we were only making a 2,000-ft change in elevation. For a 7-mile hike uphill, that’s cake. But, I was 1,000 feet off. The hike still was really simple by our standards—extremely well marked and relatively flat until the last 2 miles. That doesn’t mean we weren’t sore and tired by the end. 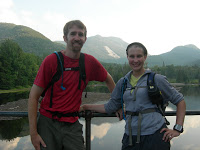 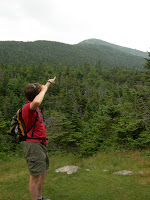 The next oopsies came with our plans for our drive home from the Dacks to NH. We originally thought, awesome, we’ll get off the trail by 6, hit the road, hit 2 more breweries in Vermont and be home by 10ish.

We forgot to account for our animal-like hunger that grew with each step of the hike. Not to mention that J was running down his list of favorite spots to eat chicken wings every other mile on the way down. We had food on our mind, that was for sure.

So what did we do … what every hungry person would do. Stopped at the first overpriced restaurant that had wings on the menu. What we should have done was settle for Subway and hit the road, cause, you know, $5 footlongs. 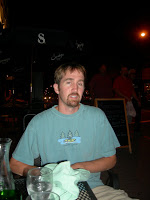 What the heck were we thinking?

Despite our budget-buster meal that was not worth it, I did get to see Lake Placid, which had me at hello. I really like that little town.Who wants to try the ski jump with me? 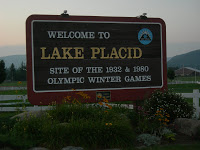 So anyways, dinner ended and we realized, shit, it’s 9:30pm. We still have 250+ moose-obstructed miles of country bumpkin roads before we can say hello to Mr. Sandman. But, we pressed on. We switched driving duties about 9 times. We didn’t see any moose, but we know they were there (this is one time I DON’T want to see a moose). We just had to avoid some skunk, muskrats and porcupines. We had extremely violent fist fights with our GPS, who wanted to take us from Bumblefuck to East Bumblefuck. It resulted in the silent treatment. Thank God we haven’t lost our ability to read maps. We stuck to the best non-highways that we could.

We finally rolled in around 2:45am. But damn, we need to be better planners next time.

BTW, can anyone tell me where this title comes from?