Three soups for me!

With J gone this week, I had big plans for … soup. He’s not a big fan of soup (unless you consider Ramen soup), so it was my opportunity to indulge. I made three soups.

First up was my Nana’s (CostCutter) chicken soup. I grew up on this. Every time we went to her house, she had it waiting for me. Then, when I went away to college, she would always send me back to school with the broth and I just had to add the noodles. It got difficult to do this when I moved to Arizona, but I realized I was an adult and could make it myself. So I asked for the recipe. And then it sat in my recipe folder for about 7 years. I think I may have made it once, but it was probably a failed attempt. This time, I nailed it. And I only had to call CostCutter 17 times!

My second soup of the week was my bean soup. I’ve made this a gazillion times and love it. I could eat it every day. But we all know what would happen if I did. ShortShorts, theQuilter and I had dinner together one night and ShortShorts DUG my soup. He’s a pretty awesome cook, so I took that as a major compliment.

I’m disappointed in my last soup. I attempted pumpkin soup. I found several recipes online. I think it turned out OK, but the problem is, I had pumpkin soup last week in Texas at a good restaurant. Mine just did not measure up. I’m going to make J try it, so we’ll see.

Still other news, we did NOT get the snow that fell across the Northeast yesterday. WTF. QuickQuestion, who lives way south of us, did get it. I hope this is not reflective of the winter we’re going to have. I need my snow!!!! 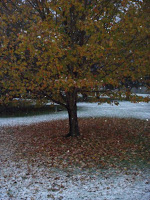