A few moguls make for a fun weekend

My Friday evening may have started off very quiet, but the rest of the weekend was full of nothing but adrenaline mixed with a little chocolate.

UncleSlickG was in town to finally join us for some Carbon Leaf shows, since we rave about them so much. But, half of NH was still without power, so they had to cancel their NH shows for both Friday and Saturday! Although we tried to convince the band to do a stealth show in our living room, they didn’t take the bait. And as bummed as we were about the canceled show, we replaced it with Avatar in 3D and Imax. The movie was definitely better than I thought, but we’re trying to figure out if it was the special effects that did the trick, or if we would enjoy it as a normal film. 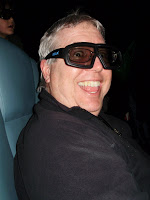 On Sunday, J & I took advantage of the little snow we have and participated in a ski-to-chocolate festival. Basically, we XC skied about 10 miles from inn-to-inn and picked up a chocolate treat at each stop. Unbelievably, I declined a few of the chocolate treats by the end of the day (maybe it was because I ate a good portion of J’s share earlier in the day). 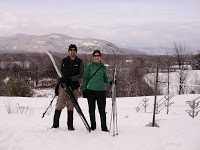 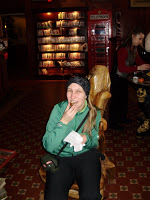 Seeing Carbon Leaf was not a total loss because we had tickets for Sunday night’s show at Port City Music Hall in Portland. Yes, I think I love this band that much and would see them 5 nights in a row if I could (don’t tell J that because we’ll be jumping on their tour as official groupees). The concert was really awesome, and different than Tupelo Music Hall, where we usually see them in NH. Tupelo is more of a sit-down, low-key place. At Port City, we were able to rock out and dance! 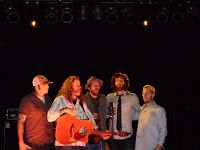 As a side note, I am convinced I now have all the luck in the relationship. Because, before Sunday’s concert, we ate at Margarita’s and they had their Full Moon Madness Party going on. I got a phone call today. I won the grand prize … a snowboard. So we have to go back to Portland sometime to pick up my prize … I’m sure J will find a concert to go to as an excuse. 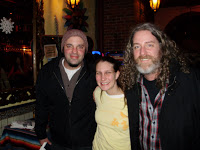 Band members Jason (drummer) and Terry (guitarist) were also eating at Margarita’s! They also won in the Full Moon Madness … but just a tshirt and hat.