Just a 200-mile jaunt in the woods

It is going to be very hard for me to describe our volunteer experience this weekend at the Untamed New England Adventure Race. Adventure racing itself is hard enough to explain, and to convey the incredible behind-the-scenes experience is that much harder. Not to sound overly dramatic, but I’m pretty sure we are changed by it (in a good way)!

I got up to the North Country for volunteer orientation at 5pm on Wednesday. All 20-25 volunteers became fast friends probably because we shared the crazy you have to have to sign up for this (not as crazy as the adventure racers themselves though). The whole event took place way up in northern NH, 10 miles from the Canadian border, where they take better care of their snowmobile trails than their roads! It is a gorgeous and very remote area. Cell phones don’t exactly work there. I loved being disconnected actually.

My day started Thursday at 5am for more orientation before registration. Once the racers register, the game was on even though the race didn’t start until 12:30pm. The racers finally have the course outline (it’s a secret until that day) and have to plot out their route for the next 3 days via kayaks, bikes and foot. 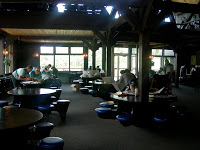 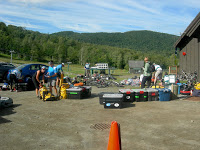 My first station on Day 1 was checkpoint 4, which was on the shore of First Connecticut Lake where the racers arrived in canoes and kayaks and I had to check if they had their whistles (mandatory gear) and I punched their passport. Racers were expected to start arriving at 2, so I got there around 12:30pm to set up. My first racers got there around 3:30pm and the last racers got there at 8:30pm. That’s the common occurrence. Hurry up and get there, then wait. Anyways, I mainly just enjoyed the views, the sounds of the loons and read my book. There were a few spectators that came by as well, so I had fun chatting with them. The arrival of racers is the most exciting part. Some are all business (especially the front runners), but others don’t mind taking a rest and talking. J arrived to the area around 7ish, but didn’t find me until 8ish. I gave him shoddy directions and without cell phones, ooops. But, he found me eventually … 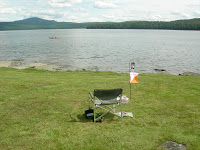 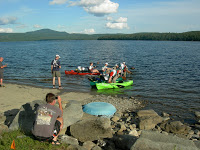 J & I were assigned to checkpoints 18 & 19 on Day 2. At this one, racers arrived on foot after trekking 20 miles and completed a zipline over a gorge and a rappel down a rock face. We got set up by 9am, but it was again hurry up and wait. Our first racers arrived at 3:30pm on Friday. Our last racers arrived at 1:30pm on Saturday. That’s more than 24 hours of waiting!

But we are NOT complaining. We got to test out the zipline and rappel. 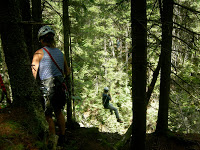 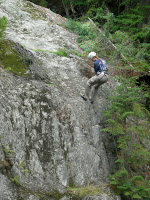 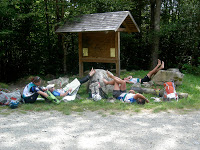 We also got to camp under the stars during the Perseid Meteor Shower and be a happy face for the very appreciative racers. The night went a little like this:
J: Did you see that one?
P: Yes, that was awesome!
P: Okay, I’m going to sleep.
J: Me too.
And 2 minutes later, racers would come in and we would be awake again! We also had three teams drop out at our checkpoint. This was night 2 and that’s very common. Dropping out is a very hard logistical problem. We had to call headquarters on the satellite phone (which didn’t always work) and get them a ride. But since we were something like 70 miles in the middle of the wilderness, it would take anywhere from 1 to 3 hours for a ride to get there. The racers only carry what they absolutely need, and since they don’t plan to sleep during the 3-day race, they don’t have camping gear. So at one point, we had a team waiting for their ride and they were near hypothermic. We ended up putting 2 of them in our car with the heat full blast (we checked their pulse here and there, since they were passed out cold). Anyways, I think we got 3-4 hours of broken sleep that night, and even though I know you won’t believe me, it was a lot of fun. 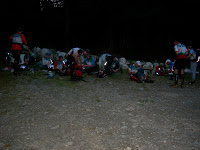 Saturday night, we spent some time recuperating. We “napped” and drove to another checkpoint just to see the racers. Then Sunday morning, we got up at 3am to man the finish line. The finish line is a little anticlimatic. They come and check in, but there are all these bonus things and time adjustments to be made, so they don’t really know what place they got in. It was still fun to be there at the finish line and hear their relief and stories about hallucinations (seeing walruses on the course, for example) before they really crash. One team member went out and got US donuts and coffee.

Overall, only 8 teams out of the 41 completed the full course. Nine teams dropped out completely. The winners were from Canada, second place from Denmark and third place from New Hampshire! The teams encountered all types of problems from wrecked feet to being detained at the Canadian border (a team of 2 Ecuadorians accidentally crossed the border on a hike and were detained for a few hours!). 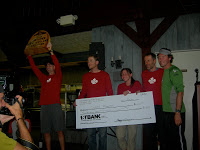 Yes, we are thinking about doing an adventure race someday (definitely not a 3-day race … yet). And given the opportunity, we will for sure volunteer because I think the behind-the-scenes is one of the best places to be. Like I said, we enjoyed ourselves immensely.

By the way, I did get to see a moose! All the volunteers and racers were seeing them left and right, but I only spotted one. One is better than none! 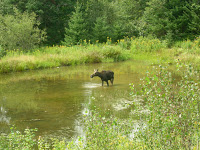 Post-race, we were pretty tired, but pumped at the same time. It almost felt like we did the race … In any case, we had our own little adventure race on the way home. We took the scenic route to drive through parts of NH we’ve never seen (checkpoint!), then we got a flat tire on the Trailblazer (checkpoint!), then a good samaritan pulled over to help us change it with makeshift tools because someone borrowed J’s tire iron and never put it back in the truck (checkpoint!) and then the Trailblazer wouldn’t start (checkpoint!). We eventually got 1st place though …