I wasn’t really unemployed this week … My old company hired me as a freelancer to cover a conference. Working is good for the soul … or maybe just the ego … or the pocketbook. Anywho, yeah for me!

The conference was in St. Louis. I’ve driven through the city on my cross-country trips before, but I was excited to see a little more of it. That didn’t really happen for a couple of reasons.

1) We were staying in a little bit of a sketchy area. This was confirmed when the hotel staff handed me and Ms. Picky (old coworker & she sort of picked her nickname!) the map and highlighted a large portion just a block from the hotel. “You’ll be fine if you don’t go here.”

2) Conference coverage is busy and we were only there for 2.5 days. That time is filled with meetings and the rest of the time is spent writing!

3) There is so much construction going on downtown. We had a hard time finding restaurants. I guess they are in the process of a big city revitalization, so we were 1 year too early.

So this is as close as I got to the arch: 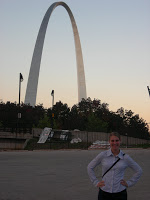 During my shuttle bus drive on Saturday from the hotel to the airport, I “explored.” We passed Forest Park, where the 1904 Wordl’s Fair took place. We passed the 630-foot arch (up closer). We passed the Old Courthouse. So I guess I could say I saw a lot of the Gateway City afterall.

My impression is that St. Louis is more “South” than “Midwest.” I know the arch represents the “gateway to the West,” but we ate a lot of foods associated with the South. Lots of fried foods (Ms. Picky & I split a FRYBURGER one day). Biscuits and gravy. Sweet Tea. BBQ Ribs (although, Ms. Picky argues that there are 3 style of BBQ: Southern, Midwest and Texas). I definitely ate back all those calories I burned from my 100-mile walk.