You are here:
Three guesses where I was today? 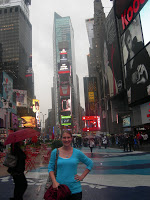 My sister and I met up in NYC on this rainy, yet humid, fall day. Growing up a stone’s throw from the city still means you can play tourist, which we try to do together every once in awhile. And we did what most NYC tourists would do.

We saw a play, “In the Heights.” Loved, loved, loved it. Lots of Latin dancing and music! While most people were excited that Jordin Sparks, American Idol winner, starred in the play, my sister was most excited that former High-5 (a children’s program that I found very odd) star Shaun Taylor-Corbett had a role. We tried to wait around to take his picture after the play let out, but it was raining pretty steadily by then. Not worth it. 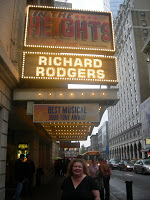 Tourists are also vulnerable to being ripped off in NYC. So when the server at Bice asked us if we wanted “sparkling” or “flat” water, we should have known better and responded “tap” water instead. But no, we said “flat.” And paid $10 for bottled water. Not much better than the $14 glass of wine QuickQuestion ordered!

Tourists also get lost. We got a little lost. But not too bad. I still think NYC is an easier city to get around than Boston!