And in this edition of Volunteer of the Year, I play an elf

J has his annual Breakfast with Santa yesterday. J pretty much has the event down to a T, even though it has grown tremendously in his four years here. He went from 8 volunteers the first year to 14 this year (could have even used more!). As for food, we just about ran out by the end of the event. That’s 30 lbs of bacon, 20 lbs of pancake mix, 40 dozen eggs, 150 sausage patties … we served more than 300 people! 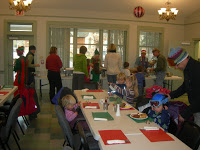 My job this year was simple. Be Santa’s helper. While looking and acting pretty silly.

The first year J had the event, I helped in the kitchen cracking eggs nonstop. I was never invited back to the kitchen again after that year. It could be that more shells ended up in the eggs than yolk … Please note that was the year of my eye surgery and pretty much blind for a few weeks there.

Most of the kids were scared of me this year (I blame the ears, which I assured them were real), but some were really excited to see a real live elf and wanted a picture with me! 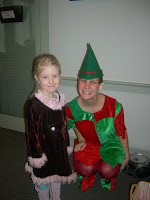 Anyways, awesome event, once again! And I do believe my volunteer duties are done for the year … Between dressing as alligators, clowns and elves, I earned my title. J has two programs left for the year: Santa Calling and the Holiday Lights Judging contest. They are fun, but I am done (hey, that rhymed!). Wonder what J has planned for me in 2011???