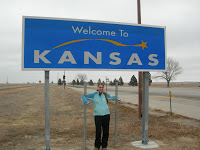 We have started our trip back east.

It’s a little earlier than we originally planned. We were going to do a ski-to-hut trip in the Colorado mountains with SILAdventure, DocDoc and their other friends. It has been planned for months. We would ski 5.8 miles uphill to a hut for New Year’s Eve and New Year’s Day. I was nervous about the big ski, but I was willing to give it a try. About 5 days ago, I read the weather forecast. The area we’d be skiing was expected to get 1-3 feet of snow and high winds. I was no longer just nervous, I was a little frantic. I just couldn’t shake the visions of being stuck in a snow squall and not being able to find my way and then freezing to death on a mountain, even though all the Colorado peeps said it would not be that bad. In the end, J, being the loving and awesome husband he is, pulled us off the trip. SILAdventure, DocDoc and all their friends still went of course and we made our way east, beating the storm. Maybe some other time I can work up my nerve to do a hut trip!

We drove 560 miles today to Topeka, KS. The highlight of the day was hitting our 14th highpoint, Mt. Sunflower in Kansas at 4,039 feet! Again, it was merely a bump on the hill that you drive to in the middle of farmlands. But, it was by far the most creative highpoint we’ve seen so far.